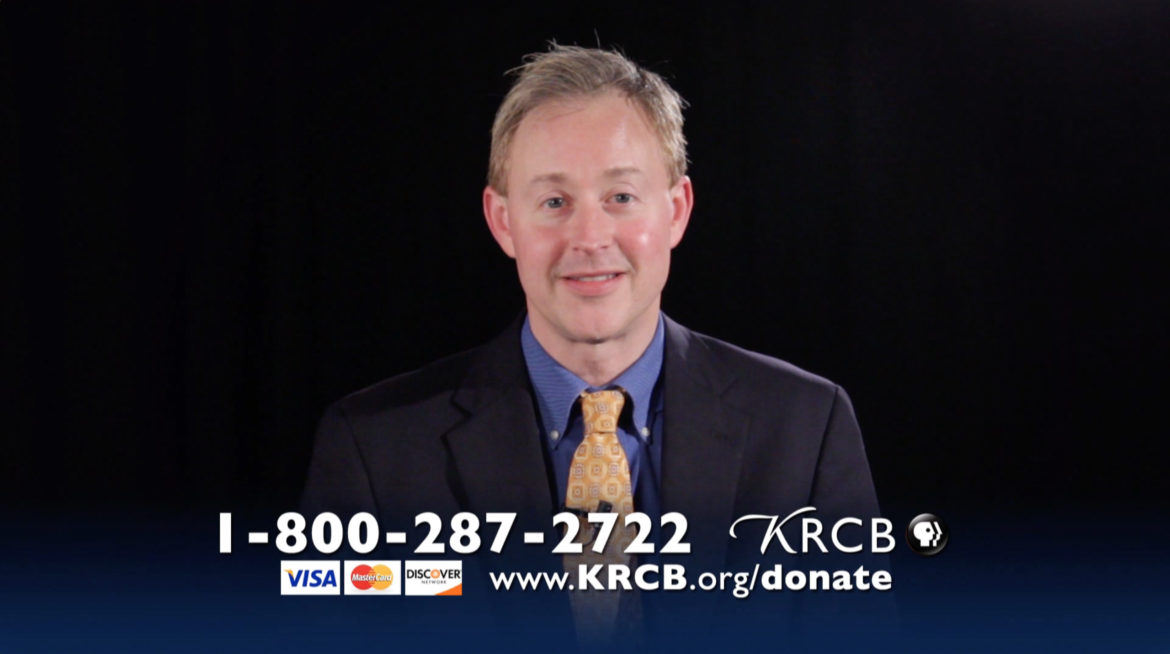 Public television’s spring fundraising rolled out in a heated high-stakes environment for clearly communicating the case for viewer and public support of local stations.

Beyond standard pitches for pledge shows, on-air fundraisers had to manage reactions to President Trump’s proposal to zero out CPB funding. In some cases they were called upon to explain why an infusion of spectrum auction cash won’t eliminate the need for local or federal financial support.

To address the political challenges, PBS and America’s Public Television Stations fired up social media and other digital platforms and began activating grassroots support for CPB funding. As advocates signed up with Protect My Public Media, the mobilization site managed by APTS, PBS fans added the “I ❤ PBS” badge to their Facebook profiles.

With nearly a half-million Facebook users adopting the badges, the viral campaign has generated 100 million impressions on the platform, according to Betsy Gerdeman, PBS senior VP of development services. The infographic “9 Reasons to ❤ PBS” has garnered more than 14 million impressions.

Don’t focus on the threat to CPB funding, PBS advised, “but rather include the situation as a subtext within a greater possible and passionate message about the mission, vision and value of your station.”

The guidance resonated with many local station execs. “You don’t want to be like Henny Penny when the sky is falling,” said Vickie Lawson, CEO of East Tennessee PBS in Knoxville. “If you call ‘woe is me’ and it doesn’t happen, it gets harder to ask for help the next time.”

At KQED in San Francisco, a pledge spot produced to air within PBS NewsHour March 16 boosted average donations during the show nearly ninefold. While a typical local fundraising break for NewsHour brings in donations of roughly $3,000, a pitch from CEO John Boland generated $27,000, said Brenda Tucker, executive director of marketing and communications.

“Today it was announced that federal support for public broadcasting has been targeted for elimination,” Boland said in the spot. “So it’s more important than ever to support quality journalism. No matter where you stand politically, viewers of the PBS NewsHour understand that uncovering the facts is crucial to understanding our world.” Boland pointedly offered no premiums in exchange for donations.

PBS NewsHour has been enjoying a national ratings bump, marking a 7 percent year-over-year increase in viewership in the first quarter of 2017, according to live plus same-day household ratings provided by TRAC Media Services. A fundraising pitch around the show is much more likely to raise awareness of the need for support, Tucker said. “And people who watch it really care deeply about how they receive their news,” she said. 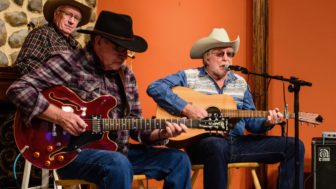 The Riders of the Silver Screen perform during a live pledge show March 18 on East Tennessee PBS. The threat to federal funding for public broadcasting helped the station set a fundraising record during the show’s time slot. (Photo: Bob Hutchinson)

“We opened up our studio, and folks came dressed as cowboys, all ages,” said Lawson. “Our telephone operators were the Oak Ridge Outlaws,” a “cowboy-action” shooting club. During pitch breaks, the overriding message was that local programs are the most difficult activities for the station to sustain on a reduced budget, she said. The live broadcast set a new $10,000 fundraising record for the show, making it a bright spot in a pledge drive that brought in about 10 percent less than last year.

Viewers were definitely reacting to the threat to CPB funding, a topic that “caused lots of conversation, even on the phone with people calling in,” Lawson said.

East Tennessee PBS is located in a red state, “right in the middle of the Bible Belt,” Lawson said. But local viewers see the value of public broadcasting.

At KRCB in Rohnert Park, Calif., a series of prerecorded fundraising breaks described the station as a trusted and essential community service.

“‘Independent’ was one of the key words we wanted to make sure we hit,” said Darren LaShelle, content manager, “to remind people that it is locally owned.”

The station, located in Sonoma County, was among the first to announce its coming spectrum windfall: $72 million to move from a UHF to VHF channel. Its pledge total this March was slightly above last year’s result, he said.

But across the public TV system, the diminishing returns from on-air pledge continued, according to Michal Heiplik, executive of the Contributor Development Partnership, which assists stations with fundraising. Based on his conversations with development leaders, Heiplik said March pledge income appears to be flat to down, on average, in March compared to the previous year.

As stations prepare for the FCC’s release of spectrum auction results, many public TV leaders expressed concerns that the inflow of potentially billions of dollars to a group of stations could become a PR liability as Congress works through its appropriations and budgeting process.

As the budget battle looms, the release of FCC spectrum auction results, expected any day now, will shower more than $10 billion on U.S. broadcasters that choose to relinquish spectrum usage rights, the FCC said. The final phase of the auction formally closed at the end of March.

KRCB and a handful of other participating stations have already announced results to their local communities. Their explanations of how the money will be invested have emphasized that auction proceeds are no substitute for public funding. The message has been well-received in individual local markets, executives said. But there’s a pervasive anxiety in the system that the windfall could become a useful club for public broadcasting foes. 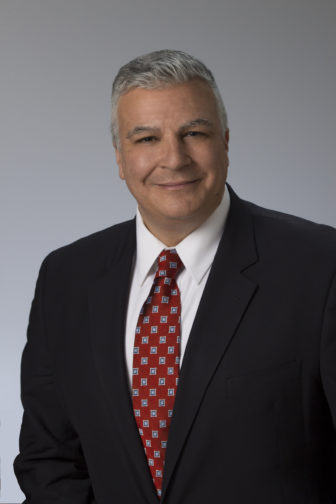 WVIA in Pittston, Pa., will receive nearly $26 million from a channel-sharing deal. President Tom Currá worries that when the total amount generated for public TV spectrum is released, the national press won’t know “how to report it, what it is, what it means,” he said. The fact that auction proceeds benefit only specific stations, or in some cases their licensees, will get lost.

WVIA plans to use its cash to build up its endowment, now worth about $700,000. The projected $800,000 generated in annual interest will benefit its community outreach programs. In emails to members and stories in local papers, Currá has been emphasizing that WVIA’s basic mission “still relies on public and federal support, which is critically important to cover its ongoing operating expenses.”

For university-owned stations, the explanations are even more complicated. Decisions about how auction proceeds are spent or invested won’t necessarily be made by station leaders.

The San Bernardino Community College District in California, for example, will receive $157 million to move KVCR to a UHF channel.

“We don’t want to give the impression that we won the lottery or that it will all go to the station,” said Angel Rodriguez, director of marketing, public affairs and government relations for the district. The college is in the process of hiring a financial advisor to help it allocate the cash, he said.

KRCB’s LaShelle also worries that national press coverage could “create confusion in the public mind” when the overall results come out. Announcements of major grants or gifts to public media — such as philanthropist Joan Kroc’s bequest to NPR — always raise questions about the need for public funding,

APTS President Pat Butler acknowledged the challenge. “Our critics are likely to want to use the results of the spectrum auction as another talking point for opposition to our funding,” he said. “We have been making very comprehensive representations on Capitol Hill that the results of the auction are in no way a substitute for federal funding.”

As APTS works the Hill, its grassroots political action on behalf of CPB funding is focused on ProtectMyPublicMedia.org, where supporters can sign a petition urging Congress to continue funding public media. Participation in the advocacy website has swelled to 600,000 supporters and is growing daily, Butler said. Some 200,000 new advocates signed within the first three weeks that the petition began circulating.

These are “grassroots advocates who are ready at a moment’s notice,” Butler said, adding, “We are hoping to get it into the millions.”

Late last month APTS added a “Take Action” button, making it easy for advocates to ask their lawmakers to go on the record supporting CPB’s appropriation in “Dear Colleague” letters to leaders of key appropriations committees.

Every fight over CPB funding has “its own character,” driven by a particular mix of ideology, partisan politics and budget constraints, said Tom Thomas, co-CEO of the Station Resource Group, a consortium that primarily advises public radio stations. This particular battle stands out, he said. “We probably have more bipartisan support for public broadcasting … than we have had in 10 to 15 years or more,” he said.

But on the downside, Thomas said, “We have an administration [that is] quite consciously trying to be a disruptive force,” creating chaos and uncertainty.

One argument for protecting CPB’s appropriation — that $445 million is a tiny fraction of the federal budget — may lose some of its potency as Congress and the White House rethink spending priorities. “The problem with being a small part is that sometimes you can get trampled as the elephant comes through the room,” Thomas said.

The White House’s skinny budget slashes funding for the Environmental Protection Agency, the State Department, the Department of Labor and the National Institutes of Health, along with dozens of smaller programs, Thomas said. These are “very big issues and big sums and gigantic budget bills, and somewhere in there is public broadcasting,” he said.

Correction: An earlier version of this article mistakenly said that PBS NewsHour on KQED saw a 7 percent year-over-year increase in viewership in the first quarter of 2017, according to live plus same-day household ratings provided by TRAC Media Services. That was the show’s performance across all stations during that time period, not on KQED alone.