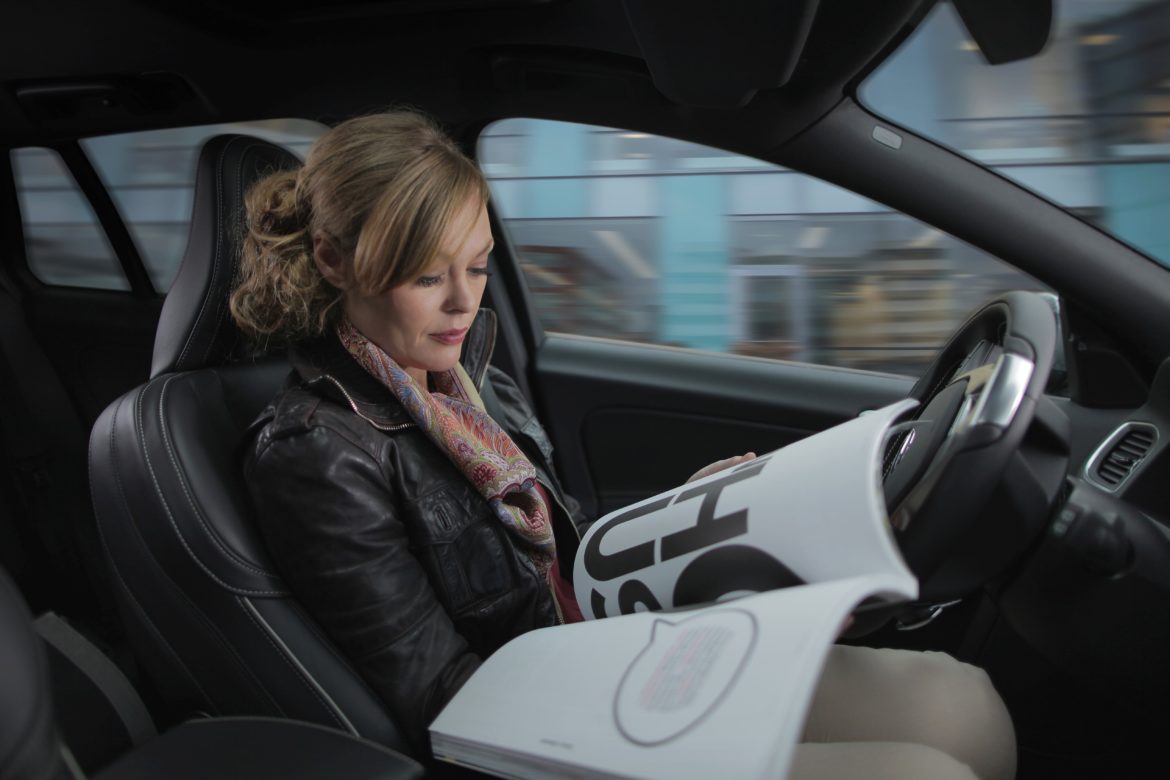 If you could do this in your driverless car, would you still be listening to the radio?

A team of public radio managers is setting out to explore the impact and opportunities for public media brought on by the advent of driverless cars.

“We’re trying to figure out, if driverless cars are coming soon … are they going to be disruptive to us?” said Umbreen Bhatti, manager of the innovation lab at KQED in San Francisco and a partner on the project. “If they are disruptive to us, are there opportunities in there that will help public media better achieve its mission?”

Bhatti said she’s been informally discussing the subject for about six months with NPR Creative Director Liz Danzico and Kristen Muller, head of content innovation at KPCC in Pasadena, Calif..

Those conversations became more formal this month with their winning of a $9,500 Jim Bettinger News Innovation Fund grant from Stanford University. Another grant is supporting Sarah Alvarez, founder of Outlier Media, who will develop a registry of home sales in Detroit in partnership with the Center for Investigative Reporting’s Reveal. Six projects were selected for grants.

Bhatti and Muller became interested in the subject after spending time in Silicon Valley, where driverless cars are being tested on public roads. That got them thinking about how much the public radio experience is “tied to the automotive experience,” Muller said.

“We’re both pretty passionate about the public media mission, so … when that fund was announced, we both saw that there was an opportunity to carve out space and time to attack the question in a more rigorous way,” she said.

Imagine getting into a car that has been designated “the Morning Edition car.”

Bhatti, Muller and Danzico are in the “super-early stages” of the project, Bhatti said. Over the next six months, they will talk with people in public media, content creation and driverless-car design who are thinking about the opportunities ahead. The team will then develop and test prototypes for different ways of presenting and experiencing content in driverless cars.

The team will also study possible opportunities “for us to dig in deeper into some of the other aspects of public media’s mission … like convening people across divides, building community, engaging citizens,” Bhatti said. “There’s so much in the mission of public media that makes it really special that we think there’s something there. What it is, we don’t know. We’re trying to figure that out.”

An “extreme example” of such a prototype could be a driverless car that picks up commuters who want to listen to Morning Edition, Muller said.

“When you think about rideshare today, we already through Uber and Lyft and other rideshare services willingly get into a car with strangers,” Muller said. “Imagine getting into a car that had been designated the Morning Edition car,” whose riders would share an interest in the latest news, she said.

“There’s an opportunity there to have interaction with other members of your community around topics, around civic engagement,” Muller said.

The group is also looking to hear from people in public media “obsessed with this topic or thinking about this topic” and who want to share ideas, Bhatti said. The group aims to provoke discussions and ideas.

“It’s sort of like ‘What’s going to happen with digital?’ a number of years ago,” Bhatti said. “That’s not really a question that people can answer. But what I think we can do is provoke a couple of conversations and continue to build on that.”

The team might also learn that driverless cars may not be a huge disruption to public media. “We aren’t walking into this with an assumption that it will be disruptive and that everyone should be scared,” Bhatti said. “It’s entirely possible that the experience in driverless cars isn’t that different from being on an airplane or a bus.”