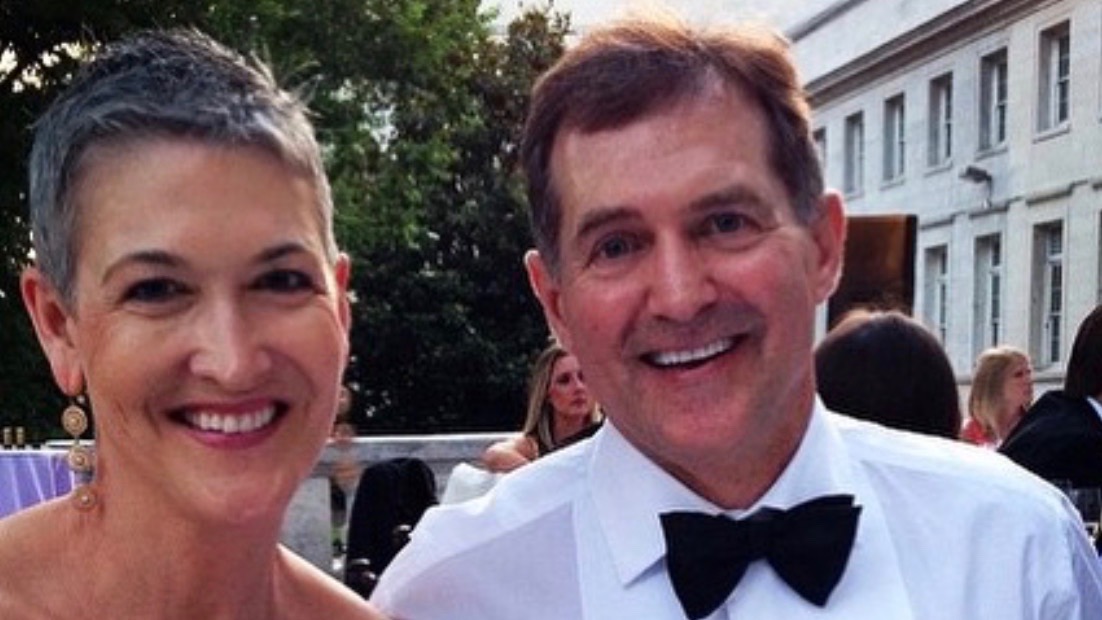 Griffin and Myre attend a friend's wedding in Washington, D.C., in 2015.

The love between Greg Myre and Jennifer Griffin took root more than 20 years ago when they were foreign correspondents in South Africa and grew as they moved on to conflict zones such as Somalia, Russia, Cyprus and Jerusalem.

Now, just in time for Valentine’s Day, the Washington, D.C.–based married couple is sharing another life experience. They’re on the same beat — national security — for competing outlets: Myre for NPR and Griffin for Fox News.

Myre joined Griffin on the beat last month with the start of the Trump administration after serving as NPR’s international editor. “It’s sort of getting back to what we’ve done in the past,” Myre said of the change. Working the same beat echoes their shared time as foreign correspondents, they say, when they learned to share information and protect sources even as they covered the same stories for rival outlets.

Myre and Griffin met in Soweto, South Africa, in 1989, covering an African National Congress rally during the waning years of apartheid. Griffin was a sophomore on leave from Harvard to report for The Sowetan, a black newspaper. Myre was a Yale University graduate and a young journalist with The Associated Press.

“If I have a scoop, I’ll tell him. I’ll even sometimes say to him, ‘Off the record …’” —Jennifer Griffin

The couple moved to other hot spots, such as Islamabad, where Myre was AP bureau chief in 1993. Sometimes they compared notes at the end of the day, and learned they had spoken to the same people. They married the following year and honeymooned in Kabul, Afghanistan.

“Even when we lived in Islamabad, we were competing,” Griffin said. “He was with AP, and I was stringing for news organizations that wanted to beat the AP. I probably wasn’t as mature then, and probably allowed the editors to drive a wedge between us.”

But no editor has been able to put asunder their union. There were trying moments, though. In the 1990s, they covered a presidential election in Tehran. Griffin, who was new to radio, was filing for NPR.

“I was very tense about doing my radio report from the hotel room, which we were sharing together,” Griffin recalled. “At that point, we had minders. You had people from government watching you, and I kicked [Myre] out of the room so I could file my report for NPR, not necessarily because there were secrets, but because I didn’t want background noise.”

Myre walked the streets of Tehran aimlessly. “He was so furious with me,” Griffin said, adding, “We’re a little more mature than we were 20 years ago.”

Griffin began reporting for Fox News in 1999, when the couple was based in Jerusalem where they started a family. NPR Deputy Managing Editor Gerry Holmes first met the couple in Jerusalem, where he was ABC bureau chief.

Myre and Griffin competed, Holmes said, but were also generous colleagues. “What struck me about them as a couple was their ability to juggle their personal life and their friendships with their colleagues, while doing this incredibly demanding thing,” Holmes said. “There was a lot of stress in their lives, and they played off of each other in that way. We were always having great get-togethers in the midst of everything.”

Myre and Griffin returned to the U.S. in 2007. Griffin stayed with Fox News, while Myre joined NPR.

“There are times when we certainly don’t share anything.” — Greg Myre

Though covering national security is competitive, the couple has been shaped by their years abroad, where they and other correspondents felt outnumbered and shared information. “Your colleague helped improve your stories, and you helped improve theirs,” Myre said. “You found cooperation improved your stories rather than competition.”

Griffin agrees. “I never compete with my husband,” she said. “I’ve often found that given the complexities of the world, and having him as a sounding board, we’re closer as a team than as competitors.”

They cover sensitive issues and know to protect their sources. Whoever lands a story won’t have it stolen. But a firewall helps.

“Yes, absolutely, there are times when we certainly don’t share anything,” Myre said.

Correction: This story has been edited to correctly identify the location of Kabul. It is in Afghanistan, not Pakistan.