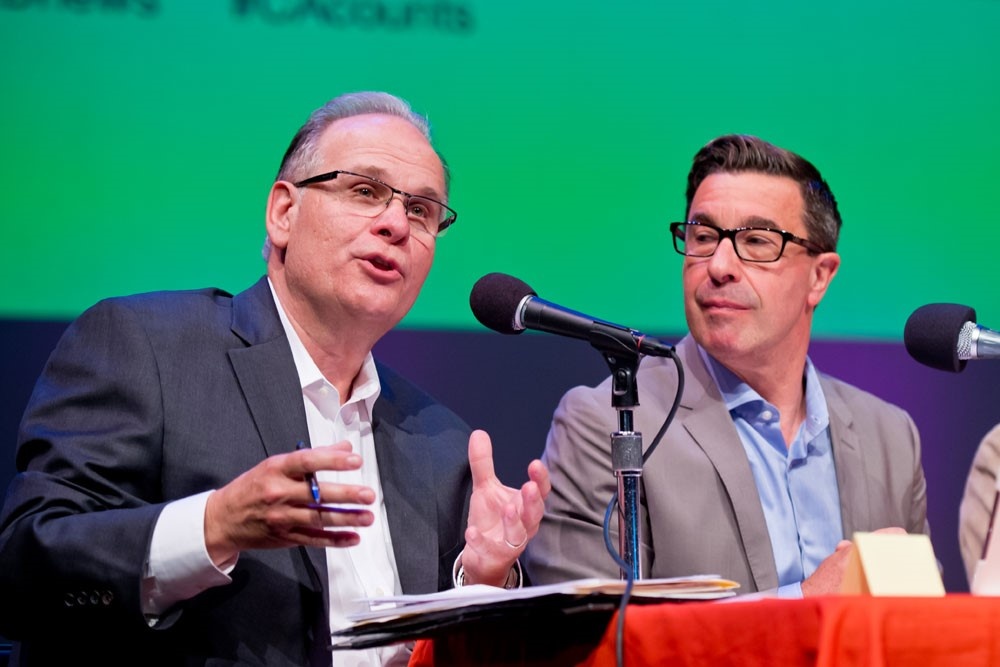 In addition to producing radio and web coverage, one of our objectives was to amplify voices from across the electorate through a series of live events. Internally, we called that portion of our multi-platform project California Voices.

First, you should know this

California’s 2016 ballot was long. There were 17 ballot measures, and those were just the statewide issues that voters needed to understand.

We wanted to break down the facts and explore the implications of these new potential laws. But we didn’t want to just talk at people; we wanted to talk with them, to listen to their concerns and answer their questions.

That’s why a town hall format made sense. KPCC’s daily public affairs show, AirTalk, and KPCC’s events and engagement team, KPCC In Person, had just wrapped up a series of regional live events that celebrated the show’s 30-year anniversary in 2015. Both teams were comfortable taking a live broadcast on the road. Plus, as a call-in show, Airtalk’s format lent itself to handling multiple guests and perspectives. KPCC agreed to take the lead with California Voices: AirTalk host Larry Mantle traveled to each of our partners’ markets and co-hosted a live town hall. The edited programs were broadcast to a statewide audience the following day. 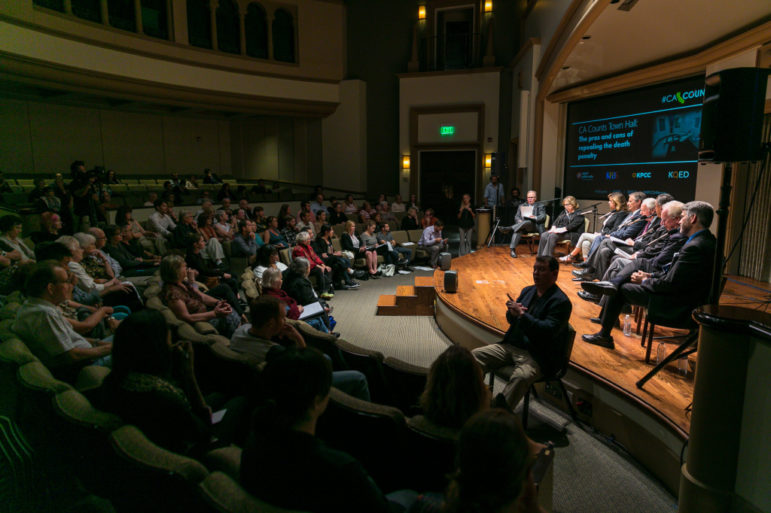 For each live-to-tape event, Larry co-hosted with talent from the local partner station. The KQED event, co-hosted by Scott Shafer focused on voter engagement. Beth Ruyak from CapRadio’s Insight teamed up with Larry to moderate a town hall on marijuana legalization. Maureen Cavanaugh of KPBS co-hosted a conversation about two competing death penalty measures. For our final town hall, KPCC hosted a voter cram session in Los Angeles the week before the election.

Each program was broken into three segments, which were split up by news breaks during the radio broadcast the following day. We created segments based on related questions: fiscal implications, social implications, etc. After every program, during a bonus Q&A portion, various attendees came to the mic to ask panelists questions.

Questions from the crowd

We began crowdsourcing questions from our listeners in the month leading up to each event because we wanted their feedback to shape our script. We did this in three different ways.

Producers read through all the comments and queries we received to find out what issues we should address in each town hall. We sprinkled the audio throughout the live broadcast so listeners in our multi-platform audience could get their questions answered. Plus, that sound made for a dynamic radio broadcast with different and unfiltered voices.

Getting people in the door

A big piece of the puzzle in coordinating production is marketing. Both stations contributed to audience cultivation and engagement, but the host station for each event did most of the on-air promotion. We also utilized existing newsletters to get loyal listeners in the door. (When we followed up with invites to people whom we met throughout the election season, they were happy to hear from us.)

We used paid social media marketing to attract people who aren’t hardcore public radio nerds. Our geo-targeted posts specifically focused on Facebook users interested in local news and politics. We wrote our posts in a way that would attract voters who needed more information about the California ballot.

If you don’t have a graphic designer on hand, use the graphic design site Canva to create invitations that can be shared on social media with brand consistency. (Here are examples of our Facebook, Twitter and Instagram posts.) We had as many as four producers live tweeting each event to create buzz using the same hashtag as our larger project: #CAcounts.

If you’re sharing content with other stations or publications, you’ll need to think about how to deliver it in a timely fashion. We used ContentDepot to distribute the town hall audio. I also wrote up web posts the night of each event, which were distributed via NPR’s Public Media Platform. We wanted our coverage to reach both urban and rural regions of California; that’s why we shared it with a broad group of smaller California stations beyond the four partners in the collaborative. Tip: Notify non-producing partners ahead of time about what special content is in the works. Ask for promotional support beforehand and for feedback once the content has been distributed. Sharing promos is an easy way to start the conversation.

It can be tough to come to a consensus about a major initiative when there are multiple cooks in the kitchen. Here are a handful of tips to help communicate. (Disclaimer: You must embrace the conference call.) 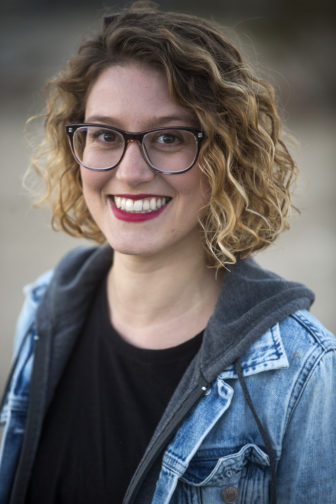 Before and after every town hall, we made a point of interviewing attendees in the lobby with “Big Mic,” KPCC’s mobile recording booth. We asked what issues mattered to them, how the election made them feel, what they would tell a friend who wasn’t voting. We broadcast that audio in promos and in our newscast on Election Day. It was really helpful to have their contact info, too, so we could continue the conversation and include their perspectives in our coverage, even after November.

In the wake of the election, there’s been a lot of talk about how to avoid groupthink, which may have limited the range of people whose voices and concerns were represented in news coverage of the 2016 campaign. Collaborations are one way to tackle that. They can be tricky, but they can also help broaden your bank of sources and the types of stories you cover. Ultimately, you’ll likely get to more people you wouldn’t normally include in your reporting.

We’re interested in hearing from you: How have you collaborated with other newsrooms? What worked? What didn’t? Tweet me: @KristenLepore.