Public radio’s strategies for building audience on digital audio platforms are at risk of falling behind emerging podcast networks, according to a new report from the Knight Foundation.

Among the key findings in “From Airwaves to Earbuds: Lessons From Knight Investments in Digital Audio and Podcasting,” is that “the public radio system, while having made progress, is not yet well positioned for audience-first, digital delivery.”

“Public radio has yet to fully scope, design and cost a scalable, shared digital infrastructure that can serve the system’s major market stations and its leading producers (including NPR).”

“The public media ecosystem has continually pushed to evolve the ways it can meet its mission,” according to the report. “But the migration of digital audio consumption to mobile means a new round of digital investment and digital strategizing is needed.”

The report, released Thursday, summarizes initial findings from the experiences of several recent grantees, including Project Carbon, a $4.4 million Knight investment that comprises grants to NPR and several stations to build public radio’s digital infrastructure. It resulted in the NPR One app, which Project Carbon is typically called.

Unlike emerging for-profit podcast networks such as Gimlet Media, legacy public radio organizations are struggling to adopt an audience-first orientation. Their established audiences represent clear paths to revenue from broadcast programming, making it difficult for them to build digital audiences and experiment with funding models. 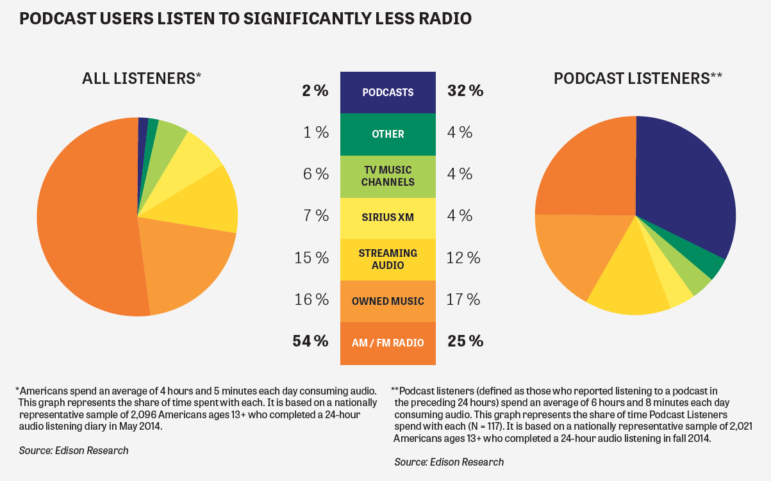 In addition, the limitations of audience data collection present a major challenge for legacy broadcasting systems. Podcast-first producers and networks are better equipped to capture audience data and apply it to improve their users’ experience, an advantage that has pushed public media organizations to develop their own apps. NPR One and WNYC’s Discover app both have new analytics tools that allow staff to derive insights from audience data, a sign of progress, the report says.

Although the field of podcasting and on-demand audio lack industry-wide standards for data measurement, efforts are underway to address the problem. The limitations create an industry-wide challenge to delivering audience insights that can help develop revenue on a broader scale.

The growth of nimble, for-profit enterprises like Gimlet, whose founders were groomed in public radio storytelling, presents competition and steep challenges for public media.

“Public radio has yet to fully scope, design and cost a scalable, shared digital infrastructure that can serve the system’s major market stations and its leading producers (including NPR),” the report reads. “Many of those interviewed acknowledge that the challenge of building an adequate digital infrastructure is, quite simply, both a more major undertaking and a more daunting challenge than they anticipated.”

Other key findings include:

Knight Foundation worked with Lutman & Associates and Dot Connector Studio on the study. It collected data in spring and summer 2016 through more than 60 face-to-face and phone interviews with grantees, public radio leaders and other key stakeholders.

Read the full report below: