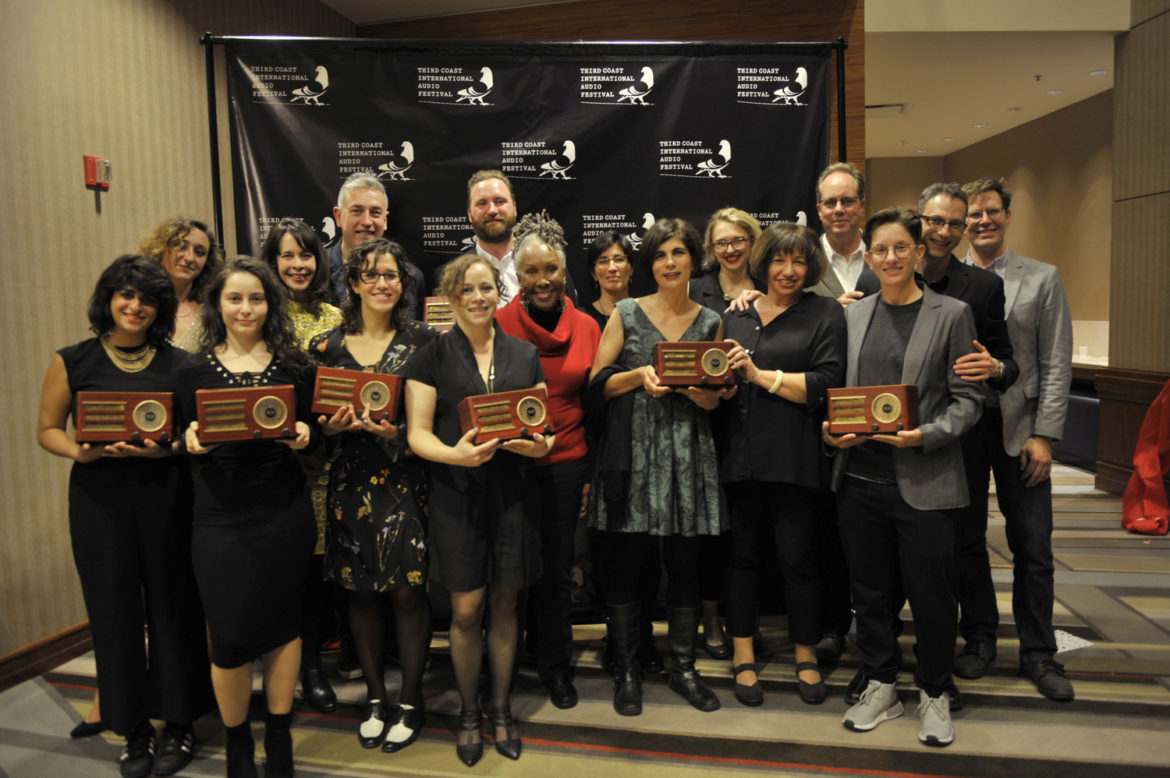 CHICAGO — Radio practitioners often cite the unique intimacy of their medium, and this year’s prizewinners at the Third Coast International Audio Festival conference proved the truth of that observation with their deeply personal stories about trauma, perseverance and, often, motherhood.

All three top honors for the Third Coast/Richard H. Driehaus Foundation Awards, presented Sunday at the conference’s concluding ceremony, went to producers of first-person narratives. Each came from a different source: a prominent podcast, an acclaimed radio training hub and an education initiative for teenagers.

The Gold Award went to “Mariya,” a personal narrative from Radiotopia podcast The Heart in which Pakistani writer Mariya Karimjee recounts how, after being subject to genital mutilation as a child, she confronted her mother as a teenager living in Texas to ask hard questions about the choice to put her through the procedure. The piece also aired on This American Life. Karimjee is one of three credited producers on the story, along with Kaitlin Prest and Mitra Kaboli.

“It’s just so great that a story about a woman and her vagina can win an award,” Kaboli said in her acceptance speech.

The Silver Award went to A Life Sentence: Victims, Offenders, Justice and My Mother, originally produced for Atlantic Public Media and Transom.org by Samantha Broun and Jay Allison. In it, Broun tells the harrowing story of her mother Jeremy, who survived a violent assault in her home in 1994, and traces the crime’s repercussions on Pennsylvania’s incarceration policy and the national political scene. Jeremy Broun appeared in person to accept the award alongside her daughter.

A WNYC Radio Rookies short, “Why Do I Stay?,” took home the Bronze. Produced by Rainy, a Radio Rookies member, along with WNYC producer Courtney Stein, the piece is a narrative of Rainy’s teenage struggles to escape an abusive relationship. Continuing the audio-memoir trend, the Best New Artist award went to Canadian Broadcasting Corp. journalist Rachel Matlow for “Dead Mom Talking,” a piece for CBC Radio One’s The Sunday Edition in which Matlow created new conversations with her mother by using audio recorded before she died.

In her acceptance speech, Matlow described her piece as “The Year of Magical Thinking meets Weekend at Bernie’s.”

Outside of the personal narratives, the award winners tackled big social topics and often affected real change. The series Precious Lives, a partnership between Milwaukee’s WUWM and commercial radio station WNOV that focuses on gun violence in Milwaukee, won Best News Feature for “A Sentencing Hearing,” which recreates the hearing for a carjacking case. It was produced by Emily Forman and edited by Celeste Wesson.

And Michigan Radio won the Radio Impact award for Not Safe to Drink, an investigation of the Flint water crisis by producer Lindsey Smith and editor Sarah Hulett. The program was the first in-depth media study of the high levels of lead in Flint’s drinking water. Smith tearfully noted during her acceptance speech that the city’s water is still not safe to drink.

The Director’s Choice award went to “Violación de un Sueño: Jornada Nocturna” (“Rape on the Night Shift”), the first-ever Spanish-language episode of the investigative public radio show Reveal. Produced as part of a five-way partnership among Reveal, KQED in San Francisco, PBS’s Frontline, the Investigative Reporting Program at the University of California-Berkeley and Univision, the piece was one of several multimedia stories that examined the sexual abuse of female immigrant janitors in California.

As a result of the story and a series of mass protests that included hunger strikes, California passed a law in September to grant more protections to janitorial workers. The press deemed it the “‘Rape on the Night Shift’ Bill.”

Two awards recognized pieces from overseas. Honorable Mention went to “The Journey,” a personal narrative by an Afghan refugee using the alias “Jamil” from a recently disbanded refugee camp in Calais, France. Jungala Radio, an audio training program for the camp’s residents, produced the piece. In conjunction with the award, Third Coast made a monetary donation to the organization.

And Third Coast’s first-ever award for Best Foreign Language Documentary went to “Dobbeltgaenger” (“The Double”), produced by Thomas Arent Andersen for the Danish radio program Third Ear X Politiken. In the piece, Andersen investigates a violent run-in he had as a teenager with a man who shared his name.

Most of the award winners dealt with weighty subjects, but this year was also the third to present the Skylarking Award, an honor for audio intended to be lighthearted. “W. Kamau Bell Asks His Mom About Sex,” from podcast network Earwolf’s parenting program The Longest Shortest Time, featured the comedian quizzing his mother, Janet, with frank questions about her sex life after having him. The piece was produced by series creator Hillary Frank and associate producer Abigail Keel, and Janet Bell also appeared in person to accept.

The awards ceremony was emceed by Anna Sale, host of WNYC’s Death, Sex & Money. While the previous year’s host, Mike Pesca, laced his remarks with irreverent humor, Sale opted for a more straightforward, hopeful tone. She compared the ceremony’s timing in the wake of the presidential election with the first Third Coast awards ceremony, held in 2001 shortly after Sept. 11, to make a case for radio’s importance in dark times.

Sale recalled Sonic Memorial, an audio archive project led by the Kitchen Sisters in the wake of the attacks to gather sounds from the World Trade Center. “Since the very beginning, Third Coast has pushed us to document our changing world,” she said.

The Robert Wildeboer Quartet provided live musical accompaniment for the ceremony. Wildeboer is senior editor of news at Chicago’s WBEZ.

Third Coast released a playlist of all the winners in alphabetical order ahead of the conference but waited for the awards ceremony to reveal who won what.