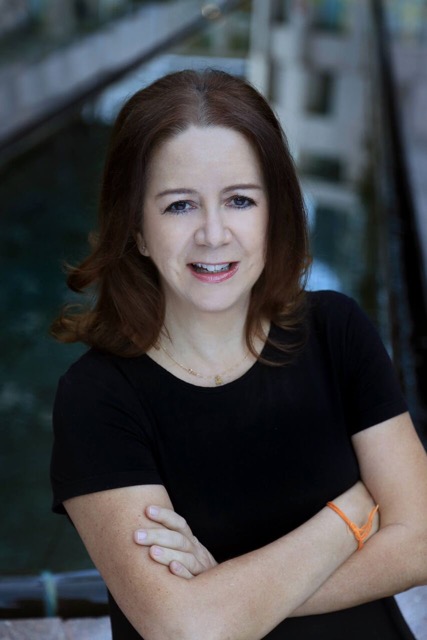 Who was Joan Kroc? Public radio listeners hear her name every day in funding credits on NPR, and some may know that she left the network a $225 million bequest that amounted to its largest gift ever. But they may not know much more about how she came to focus such generosity on the network. Public radio reporter Lisa Napoli digs into the story behind the donation in her new book Ray & Joan: The Man Who Made the McDonald’s Fortune and the Woman Who Gave It All Away, to be released Nov. 15. Napoli appeared on our podcast The Pub to discuss the book, and in this unpublished prologue to Ray & Joan, she describes how she came to write it.

Outside the Art Deco courthouse on Main Street in Santa Monica — two blocks from the historic pier where a twinkling Ferris wheel lights the sky and tourists jam the rafters — sits a 26-foot-tall gnarl of copper chain link and fiberglass formed into the unmistakable shape of a nuclear mushroom cloud. This looming grey-black mass is “Chain Reaction,” forged in 1991 at the direction of the artist Paul Conrad, a man renowned in his lifetime for his biting editorial cartoons — which won him the Pulitzer prize, three times — not for his sideline artistic pursuit in statuary. “This is a statement of peace,” reads the descriptive plate at the base of the work. “May it never be an epitaph.”

In 2012, after more than two decades spent marinating in a salty cocktail of Pacific Ocean air and auto emissions, the five-and-a-half–ton “Chain Reaction” was in danger of imploding. A city official had witnessed a child brazenly shimmying up its column, loosening a coil that fell perilously to the ground. Alarm bells rang regarding liability. A preliminary inquiry put the cost of restoring it in the neighborhood of $200,000 — a prohibitive sum, and only $50,000 less than the amount that had been donated to craft and install it in the first place. Typically for southern California, where obliteration is often chosen over conservation, the city council bandied about the idea of simply knocking the piece down.

Historic preservationists, who work hard around these parts to keep the urge to obliterate in check, erupted in anger at the mere suggestion that “Chain Reaction” might be “deaccessioned.” Peace activists stepped up too. (The progressive city of Santa Monica is rife with both, with some overlap.) The conspiracy theorists among them pointed across the street at the monolithic headquarters of the think tank, RAND, its history rooted in the military, and suggested that it was behind the move to destroy the work. (It was not.)

In my capacity as a part-time arts and culture reporter for the public radio station KCRW, located a mile east of the sculpture, I dispatched myself to Main Street to see “Chain Reaction” for myself. What reporter wouldn’t love a story rife with such tension? Activists crusading against the wrecking ball — art in peril. I wanted to see the work in person. Truth be told, if I’d ever noticed it before, I’d dismissed it as a cellphone tower.

“Who paid for this in the first place?” I asked well-known local Jerry Rubin (no relation to the famous ’70s Yippie of the same name), who had leapt in to spearhead the movement to save the sculpture. Jerry had run for City Council six times and was a fixture at the Saturday morning Farmers Market on the busy Third Street Promenade, where he’d sell peacenik paraphernalia like bumper stickers. He would fast for the cause of peace on a dime. Whatever the season, he always wore cargo shorts and a T-shirt, usually one that turned his chest into a billboard for his hopes for the world (“Let’s build a nuclear-free zone!”). Back in 1993, two years after the sculpture’s unveiling, he’d spread dry ice at the base of it, mimicking a nuclear explosion, to commemorate the 47th anniversary of the bombing of Hiroshima.

Before he could answer, I posed a follow-up, “Why not ask whoever funded it to finance the repairs?”

The normally orotund Jerry delivered the answer in hushed, reverent tones. “Well,” he said, sharing a secret, “we think it was Joan Kroc. But she gave the money to the city anonymously in the late 1980s. And of course, she’s dead now.” He paused. “She was very involved in the peace movement, you know.”

I didn’t. Given my job in public radio, Rubin assumed that I must have Joan Kroc’s biography imprinted on my DNA. She was nothing less than a hero to NPR for her mammoth gift of $250 million, the largest donation the network had ever received. The bequest had been announced in November 2003, just three weeks after her passing, and had posed a thorny PR challenge. NPR’s member stations relied on local pledge drives to pay the network for its programming, as well as the wages of local staff like me. Few listeners understood the difference between NPR — which produced many, but not all, of the nationally syndicated shows — and the stations that transmitted its content. This murkiness worked to both parties’ advantage, most of the time. Now that this windfall had materialized, stations feared their typically generous donors who felt obliged (and inspired) to support their favorite news source might be disinclined to open their pocketbooks. It was hard enough to bat down misinformed criticism that erupted from time to time that NPR got a significant percentage of its budget from the federal government.

Then, there was the source of the Mrs. Kroc’s fortune: McDonald’s — the nefarious poster corporation that for decades has embodied the twin scourges of processed food and globalization. The public radio audience skewed (to generalize) far more quinoa and kale than Quarter Pounder and fries. Given the network’s ongoing financial struggles, which imperiled its future, and the significance of this gift, most devotees seemed willing to overlook that. The grand dame of the medium had even quipped disbelievingly at the time the donation was announced, “I’m changing my name to McStamberg.” Though NPR types might not typically deign to eat McDonald’s burgers, employees brought in Big Macs for lunch the day of the announcement. No one could say no to Joan Kroc’s final wish. (Though I would later learn that PBS, also on her gift-list, never returned her calls.)

Despite the fact that I’d started working in public radio around the time all this had occurred, I’d never given Mrs. Kroc or the gift much thought, apart from my amusement at the irony. As for McDonald’s, I couldn’t count myself among their customers. Like the 20-plus–million listeners of public radio, I’d heard the name “Joan Kroc” trumpeted on the air several times each day for years now. I couldn’t help but wonder: Who was the woman behind this gift?

And now I learned that “Chain Reaction” — the structurally challenged public artwork created as a clarion call against the scourge of nuclear weapons, a paean to the interconnectivity of us all — might be linked to this same public radio benefactress. Suddenly, I found myself less interested in issues of preservation than in the mysterious provenance of this unwieldy sculpture. Much of Joan’s life, I would soon discover, had been cloaked in secrecy.

Standing under a palm tree across from the mushroom cloud, I pulled out my iPhone and Googled, in search of a biography to read. There was none, but there were snippets of information: Another posthumous gift she’d given — $2 billion, earmarked for the Salvation Army to build recreation centers in poor communities — was ten times larger than her NPR bequest. The only crazier thing than a fast-food heiress giving money to a whole-foods–infused media outlet was giving money to erect palaces to fitness! There was scant other information about this Mrs. Kroc readily available, beyond the obvious: that she’d inherited the San Diego Padres when her husband died, making her part of a small club of lady baseball team owners; that she was Ray Kroc’s third and, perhaps predictably, much younger wife.

The culture of celebrity and wealth held little interest for me. But in a world that venerated money and fame and the acquisition of both, I found myself increasingly intrigued by those who had both and also happened to be benevolent. I loved the idea that a person who acquired or possessed so much — who’d won life’s financial lotto — felt obliged to share their wealth. Sure, tax shelters and tax deductions impelled some personal philanthropy, but even I, the paid professional skeptic, wasn’t that cynical. Over the years, I’d reported (for the public radio show Marketplace) on “The Giving Pledge” — an association of mostly multimillionaires who’d agreed to donate at least half their wealth in their lifetime.

Maybe intrigue stemmed from my developing personal priorities. An opportunity to volunteer in the Kingdom of Bhutan years before had inspired me to leave the grind (and the steady paycheck) of the daily news business and to recalibrate my life’s priorities. The older I got, the more I wanted to give — that went for time, as well as money. Even for those of us whose finances were on a far more fractional scale than the average multibillionaire, the act of giving, not the sum — of seeing the larger world beyond your own needs — seemed the key to a fulfilling life. I’d proudly wrangled friends to cook at a women’s shelter on Skid Row in downtown Los Angeles and worked closely with refugees from Bhutan. I’d fallen in love with the man in my life when, during a conversation at a party, a friend asked him what he’d buy if a million dollars landed in his lap, and he’d answered without hesitation, “Buy? I’d give it away.”

This giant mushroom cloud that was “Chain Reaction” had, at least for this audience of one, accomplished what art, at its finest, should do: provoke. I found myself filled with questions: How did this hunk of metal come to be, and in this particular spot, and, who was this woman who’d underwritten its pointed irreverence? How did a fast-food heiress find her way toward an interest in peace? How did she collide with the artist Paul Conrad, who lived hours away from San Diego, her home base? And why, at the end, had she decided to fund recreation centers? Where else did her money go? What would her famously conservative husband have thought about these gifts? How was it that no one had written Joan’s biography?

Since McDonald’s made her philanthropy possible, how was it, exactly, that McDonald’s became McDonald’s? The fine book Fast Food Nation and the documentary Super Size Me did excellent jobs of explaining exactly why eating processed food is perilous. But I found myself wanting to understand how Ray Kroc became a heralded titan of 20th-century capitalism, studied still today in business schools, ranked on Time’s list of the 100 most important people of the 20th century. Kids at a junior high in San Diego had even tossed out their school’s name, Einstein, in favor of renaming it for Ray Kroc — the Henry Ford of the food business. And, braiding these questions together was the biggest one: How did this man intersect with a woman of such varied interests like Joan Kroc — the woman who inherited the fortune, who gave it away?

Standing under the chain-link nuclear mushroom cloud that McDonald’s built, I decided to find out about her, and him, and them. Somebody needed to tell the story. It might as well be me.