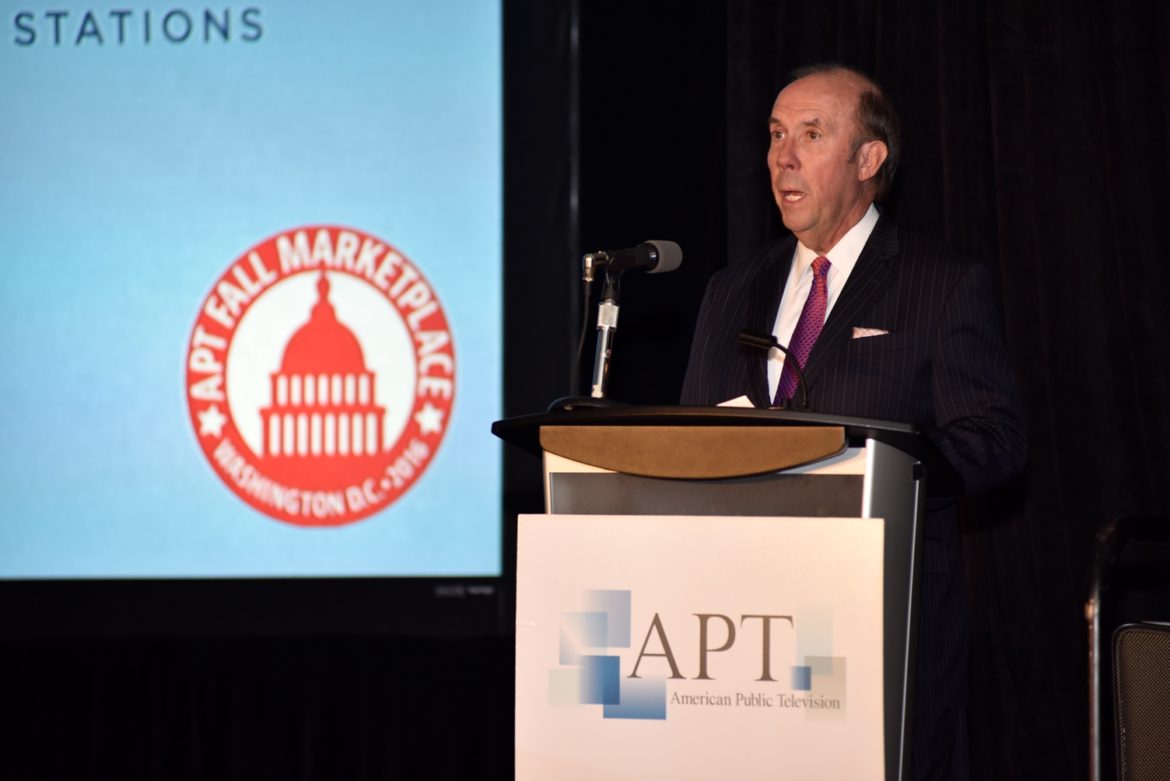 Patrick Butler, speaking at the annual Fall Marketplace sponsored by distributor American Public Television, predicted that Democrat Hillary Clinton will win and that the Senate will retain a slight Democratic majority. Meanwhile, he foresees the House remaining under Republican control, but with its majority shrinking.

In that scenario, President Clinton “would be a very good friend to public television,” Butler said, given her lifelong commitment to education. In 1997, when Clinton was first lady and Butler was an executive with the Washington Post Co., the two organized a White House conference on early childhood development to coincide with a special edition of Newsweek.

“Mrs. Clinton knows this subject very well,” Butler said. “As she herself has said, it is the animating issue of her entire public life — and we in public television could look forward to being productive partners with her in making high-quality preschool education a welcome fact of life for every child in America.”

If a Donald Trump administration moves into the White House, public broadcasters would literally have a “champion” there: Vice President Mike Pence, who received that honor from APTS in 2014. Pence, a critic of funding for public broadcasting when he served in the U.S. House from 2001–12, became a supporter and restored state funding as Indiana governor in 2012, the first time in eight years stations received that outlay.

Next session, a Democratic Senate would have a new majority leader, Sen. Chuck Schumer of New York. Democratic senators are “also likely to be sympathetic to our public service missions of education, public safety and civic leadership, as they have been in the past,” Butler said.

On the House side, Republicans have increasingly supported public broadcasting’s work over the past several years, and Butler expects that to continue.

Butler is pleased with the strides that pubcasting has made on the Hill since the 2011 funding crisis that led to CPB funding cutbacks the next year.

“Years ago there was a commercial featuring the jingle, ‘I love baseball, hot dogs, apple pie and Chevrolet.’ I want to add public television to that list of universally appealing American icons,” he said. “We’re far enough along that path that I don’t fear the outcome” of Tuesday’s election, Butler said, “whatever it is.”

Programmers also heard the outlook for the FCC, another Washington entity that affects public broadcasting, from Steve Schaffer of Schwartz, Woods & Miller. The five-person bipartisan regulatory panel is nominated by the president and approved by the Senate.

Two commissioners are past their term-end dates and are serving in overtime, Democrat Jessica Rosenworcel and Republican Ajit Pai. The chair, Tom Wheeler, “has not said exactly what he’s going to do after the president is elected,” Schaffer said. “He may stay on for some amount of time, which is unusual but has happened.”

Schaffer added that public broadcasting is “just barely” on the commission’s radar “because there are so many other big complicated issues,” he said, such as the broadcast spectrum auction and the upcoming ATSC 3.0 protocol change.

“The days of having a designated educational broadcasting commissioner are long gone and are just not coming back,” Schaffer said.