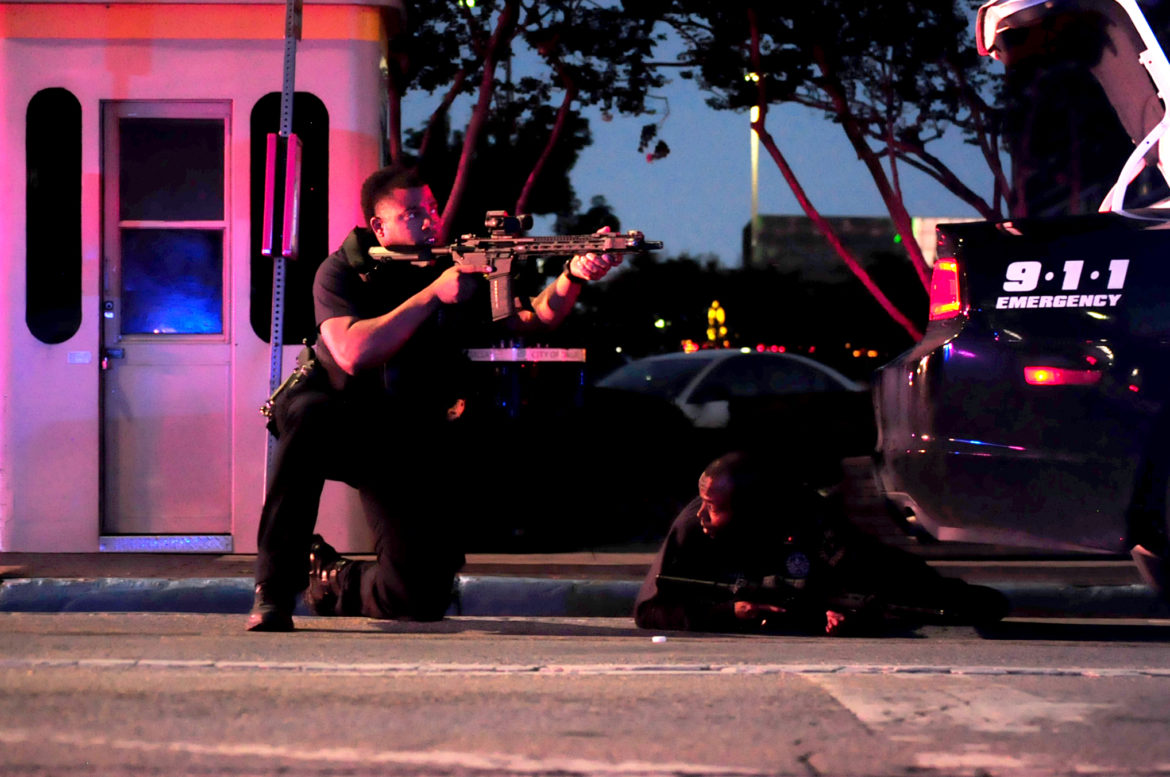 In the moments after the Dallas shooting July 7, police weren’t sure where the bullets were coming from. A KERA intern took this photo before taking cover in a TV van. (Photo: Javier Giribet, KERA)

In the moments after the Dallas shooting July 7, police weren’t sure where the bullets were coming from. A KERA intern took this photo before taking cover in a TV van. (Photo: Javier Giribet, KERA)

A station can never foresee a horrific day like July 7, when a gunman opened fire after a peaceful protest, killing five Dallas police officers and injuring 11 other people. When it does happens, we learn lessons. Here’s what KERA learned that day and in the weeks afterward.

Create a station disaster plan now. If you think violent events are not going to happen in your community, you might be very surprised one day. We all have preparedness plans for other aspects of our operations — when you are in that state of surprise, a solid plan can be a lifesaver.

At KERA, we began an expansion of our newsroom four years ago. Our strategic plan called for us to focus on the kind of in-depth reporting that public broadcasting is known for, on topics including education, the arts, politics, poverty, science and technology. But we were then hit by a series of breaking news events. First came a fertilizer plant explosion that devastated the nearby town of West, Texas. Next, the first person to be diagnosed with Ebola on U.S. soil put Dallas in the national and international spotlight. Then came the events this summer. So we have developed an expertise in an area that was not detailed in that original strategic plan.

Inside the organization, expect events like these to go beyond the news department. As the days and weeks go on, almost everyone at the station will get involved in one way or another — communications staff, technology, HR, digital, community-engagement staff.

When external requests arrive — and they will — be strategic. People and organizations want to be helpful, and they want public media to be involved. In our case, we heard from a group that wanted to use our phone banks for a fundraiser. Our General Manager had a direct request from a prominent donor who wanted the station to promote a fundraising dinner he was organizing to benefit the officers’ families. A major nonprofit launched a project, and we needed to evaluate the role we would play alongside the local newspaper and a high-profile community organization.  And there were requests for us to send representatives to events at churches, schools and other venues.

Don’t overcommit early on. And do have clear answers for why you’re saying “yes” or “no” to community leaders, board members and organizations who approach your station. One thing that helped: We had a written plan for how we decide to greenlight a partnership or community-engagement project so we can equitably evaluate every appeal that comes to us. As a public service organization, you want to play a role, but one that is appropriate to your organization. If you say “yes,” you don’t want to appear to be playing favorites; if you say “no” to a board member or donor, it’s good to have clear reasons you can articulate.

Make sure personnel roles are clear. In the last four years, we’ve increased the size of the news staff from 13 to 24. That includes hosts, reporters, editors, interns and audio, video and digital producers. And every one of those people played a key role in our coverage that began on the night of July 7. So it’s crucial that roles are defined clearly:

Someone in charge — to handle immediate coverage decisions, scheduling and higher-level communication with national and international media outlets. That was our vice president of news, working in the office.

Someone focused on immediate digital coverage — That was our managing editor, working from home. After that first night, the ME handled editing on digital and our twice-a-day local special reports in Morning Edition and All Things Considered.

Reporters in clear roles — We had one reporter at the site, feeding our digital editor and working on the big radio story for the morning; a second reporter assigned to feed national newscast and other network needs; a newscaster/board operator to host our special newscasts that night and into the wee hours; and four or so producers around downtown, collecting witness stories.

Don’t forget the interns! One of our interns was an accomplished photographer. Another intern was assigned to cover the initial rally. When the shooting broke out, he was in the middle of it. He had the presence of mind to lay his phone down and hit record, so we had sound of a lot of the action between the cops and the shooter. The intern dove into a TV news van where he and the other station’s photographer and reporter stayed for six hours until the suspect had been shot. The intern’s car was in the middle of the shooting zone. He didn’t get it back until five days later — and when he did, he had a bullet hole in his bumper.

Focus your digital and radio reporting. That night we did a live blog on our website with constant social media updates that all our people fed. On the radio, we did live newscasts starting at 11:04 p.m. and going to 2 in the morning. We prepared an 8-minute “special report” for our local news segment in Morning Edition, centered on witnesses talking about their experiences. We were determined to really focus on sound for the radio reporting, so we had a lengthy first-person narration from a man who was across the street.

Shift from immediate coverage to medium-range. We tried to keep the fundamentals in place the next few days — live blogs and up-to-the-moment updates on the website and social media; a strong, collaborative presence with NPR and other national and international outlets; and our local radio presence focused on voices and creative use of sound. The next evening, we put together a three-minute sound montage, “24 Hours in Dallas.”

Think local, regional and national. NPR regional editor Russell Lewis flew in and worked out of KERA’s newsroom for three or four days. Over a couple of weeks, we had six NPR reporters here — they participated in our news meetings, we coordinated event coverage and we swapped tape. Early on, we also decided to offer our daily 2-hour talk show Think to national audiences by posting it on ContentDepot. Over two weeks, we provided eight hours of coverage to stations across the country over two weeks or so. We did live coverage of President Obama’s appearance at a memorial service, followed by a live national call-in show. And the next week, we co-produced 12 Days in July: Our Shared Tragedy, a call-in show with stations in Baton Rouge, La., and New Orleans co-hosted by our talk show host here and the news director in New Orleans.

Build a digital archive. It pays off over the long term to create and curate one place where all your staff-produced content will live for months and years to come. It helps for grants, proof of performance and potential awards. Ours is a fairly simple Core Publisher topic page, “The Dallas Shootings: A Look Back.”

Stay calm! Leaders need to be the calm amid the storm. You also need to start thinking immediately about scheduling, giving people time off. Several of our people called in the night it happened, asking what they could do. Our VP/News said, “The best thing you can do is go to bed. We’re going to need you tomorrow morning and the days after that.”

Don’t be afraid to experiment. We did our first-ever Facebook Live of our news meeting the next day on a whim. It was a news meeting, and it got more than 4,000 views – which blew us away. We also tried to take the standard-issue funeral story and retool it into a series of profiles of the slain officers called “Remembering the Fallen.”

Don’t forget the essentials. We brought in food for almost a week for the staff and kept reminding folks to charge their cellphones.

The ultimate key: Have a plan and build enough muscle memory covering standard breaking-news events that you’re ready for the big one when it hits.

Mary Anne Alhadeff is president and c.e.o. of KERA, Sylvia Komatsu is chief content officer, and Rick Holter is v.p. of news.