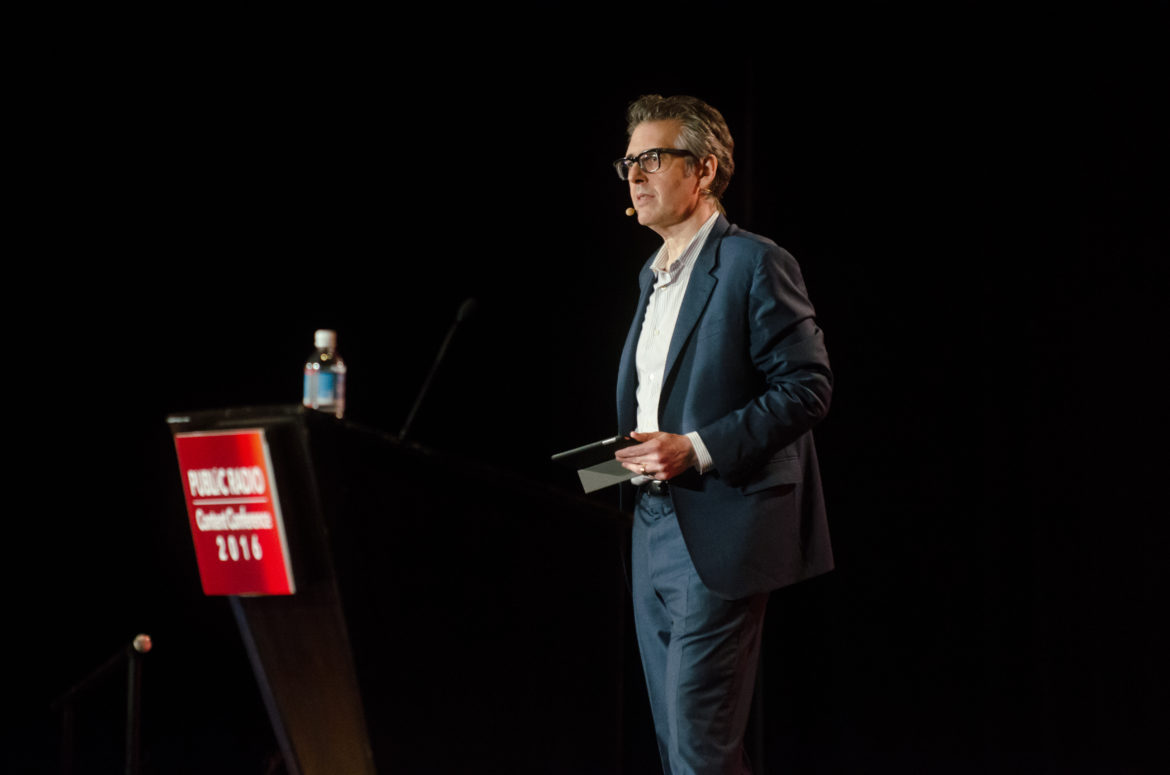 During his keynote, Glass told PRPD attendees that he's enthusiastic about the future for public radio stations. (Photo: Rich Orris/PRPD)

During his keynote, Glass told PRPD attendees that he’s enthusiastic about the future for public radio stations. (Photo: Rich Orris/PRPD)

Ira Glass’s assignment was to give a “pep talk” with his keynote at the 2016 Public Radio Program Directors conference in Phoenix, he explained at the outset of his remarks on Wednesday.

“Which is easy, because I feel very enthusiastic for the future of public radio and stations,” said the host and creator of This American Life, a program that started on public radio and went on to become arguably the most successful podcast in the world.

In acknowledging the source of station leaders’ anxieties, Glass relayed a story from 1994 (the year before TAL’s radio debut) about a man named Larry Keeley, who at the time was a board member for TAL’s home station of WBEZ in Chicago.

Keeley was (and still is) a consultant whom companies paid to produce long-term business forecasts for their industries, and he prepared such an analysis for WBEZ on a volunteer basis, Glass said.

“Basically what he foresaw [was] satellite radio — which he thought might be more powerful than it turned out to be — and the internet, and the fact that people would be able to bypass their local public radio stations and just get content,” Glass recalled.

Keeley predicted that over the next 20 years, stations would divide into two groups; those that produced original programming would thrive, while those that simply functioned as local distributors of other people’s content would be in trouble.

“I feel like I see a lot of that happening,” Glass said. The best way to fix that problem, he said, “is to just make original programs, which is — of course — our mandate anyway.”

Glass said he sometimes hears from leaders of small stations that they cannot afford to start new shows. “I don’t want to be too harsh,” he said, “but I just think that that’s ridiculous. I think anybody who says that actually is not looking at all their options.”

In particular, Glass encouraged stations to keep experimenting with podcasts. “The ad rates are still very high. There’s a bubble, and I feel like we should try to ride out that bubble as long as we can, because it’s going to go away,” he said.

The bulk of Glass’s talk was dedicated to highlighting This American Life’s recent achievements and experiments in new programming models, though he did highlight five smaller, station-produced podcasts as being successes in their own way.

1) But Why: A Podcast for Curious Kids

Glass’s first example was Vermont Public Radio’s But Why, “a podcast that answers kid’s questions,” he said, produced and hosted by VPR’s Jane Lindholm with additional production from Melody Bodette.

The clip Glass played was from an episode in which a 7-year-old boy named Dylan from Jericho, Vermont, asked if bumblebees have hearts. Lindholm answered the question (short answer: kind of) with the help of entomologists.

The show has attracted one national sponsor and questions from children in 28 states and seven countries, he said. It has 11,000 subscribers — a miniscule reach compared to TAL’s podcast audience of over two million people, however Glass emphasized that the program is produced as a part-time effort by VPR staff without any specific budget line.

When West Virginia coal magnate Don Blankenship went on trial for alleged safety violations that led to the deaths of 29 miners in a 2010 explosion, West Virginia Public Broadcasting launched a limited-run podcast series that followed the proceedings all the way through Blankenship’s sentencing in April.

WVPB CEO Scott Finn, a former news director, hosted most episodes of the show himself.

“From my point of view it was a huge success, even if the download numbers were not huge,” Finn wrote to Glass in an email. “The podcast itself only took a few hours [per episode] to produce, then we were left with content for our subscribers, for the web, for our radio air.”

3) Out of the Blocks

The series, called Out of the Blocks, is posted as a podcast but has also aired on the radio.

The clip Glass played, from the episode 2100 E Monument, featured a man telling Henkin matter-of-factly about the time he shot a man for talking disrespectfully to his mother.

“The numbers are low,” Glass said. “They haven’t figured out how to promote it yet as a podcast.” However, Henkin told Glass in an email that the series has earned much attention and goodwill from the community for the WYPR.

Each episode of Wyoming Public Radio’s HumaNature podcast “is just one story of somebody’s encounter with nature,” Glass said with a chuckle.

The clip Glass played — from episode 11, which Glass said he “really liked” — was the story of a man named Jon Dunham who backpacked around Latin America with a donkey after a family he was visiting in Mexico unexpectedly gifted him the animal, named “Judas.”

In an email to Glass, the producers of the show said it “gives Wyoming Public Media a product with Wyoming flavor that has an appeal beyond our borders. This broadens our reach and creates a new audience — particularly important because we’re the least populated state in the county.”

Total downloads of the show’s first season — which dealt with the broader issues raised by the 2014 protests in Ferguson, Mo. — stand at about 44,000. The in-progress second season zooms out to examine similar issues in cities across the country, and has gotten more than a 100,000 downloads so far.

The show has earned the station more than $300,000 in underwriting and grants, Glass said, now allowing its production team to work on the podcast full time. We Live Here steams on NPR One and the great majority of its audience lives beyond St. Louis.

Glass said that the show’s hosts, Tim Lloyd and Kameel Stanley, have “adopted the utterly super-casual tone we try to do” on TAL.

Glass offered an idea that will encourage creative talent to develop their ideas within public radio: Share legal and financial ownership of podcasts that they conceive and launch with their stations.

Glass said the 50/50 profit split between “talent” and “financier” is a “very standard deal for people who are making creative, original work,” such as filmmakers. Serial host Sarah Koenig and senior producer Julie Snyder own “a lot” of the program, which is produced by the TAL organization, he said.

“If somebody’s got a good idea for a show, you’re living in a market where they don’t have to do it with you,” Glass said. “If you want to keep them and keep them happy, you need to consider ownership. I think it’s fair.”

Glass’s company is currently developing three new shows, one of which he said could be a radio show in addition to a podcast. The understanding he has with each of the producers involved is that they will own a stake in their programs, should they come to fruition.

If 50 percent of profit seems like a lot, he said, “just remember that most things fail. . . . You’re talking about theoretical dollars that don’t [yet] exist.”

In defense of fun

“I just want to make a principled defense of fun on public radio, a mission-driven defense of fun,” Glass said to cheers from the audience. He pointed to TAL’s coverage of the refugee crisis in Greece as an example of how light anecdotes can hook an audience into listening to heavy stories that they might otherwise tune out.

In a later example of the value of fun, Glass played a clip from The Colin McEnroe Show from WNPR in Hartford, Conn. (Glass erroneously referred to the program’s host as “Chris McEnroe.”)

Each episode of the daily show starts with a comedy sketch. Glass played a sketch that parodied Serial as a prelude to an episode about breakfast cereal.

McEnroe — who is a newspaper columnist and came to public radio late in his career — wrote in an email to Glass, “My whole idea back in 2009 was to make a show that defied or pushed against as many public radio tropes and conventions as it could.”

“Fun was the single brightest pole star when we got lost in the fog,” McEnroe wrote, though he acknowledged that his program often stumbles as it does experimental content in the context of a daily show where his team cannot afford to kill many segments that don’t turn out well.

To that point, Glass added, “You have to try stuff and then understand some are going to fail. You’re not going to break public radio if a show fails. They fail all the time.”

“And that’s where you’ll find the future,” Glass said.

One thought on “Glass: Stations must create to survive”