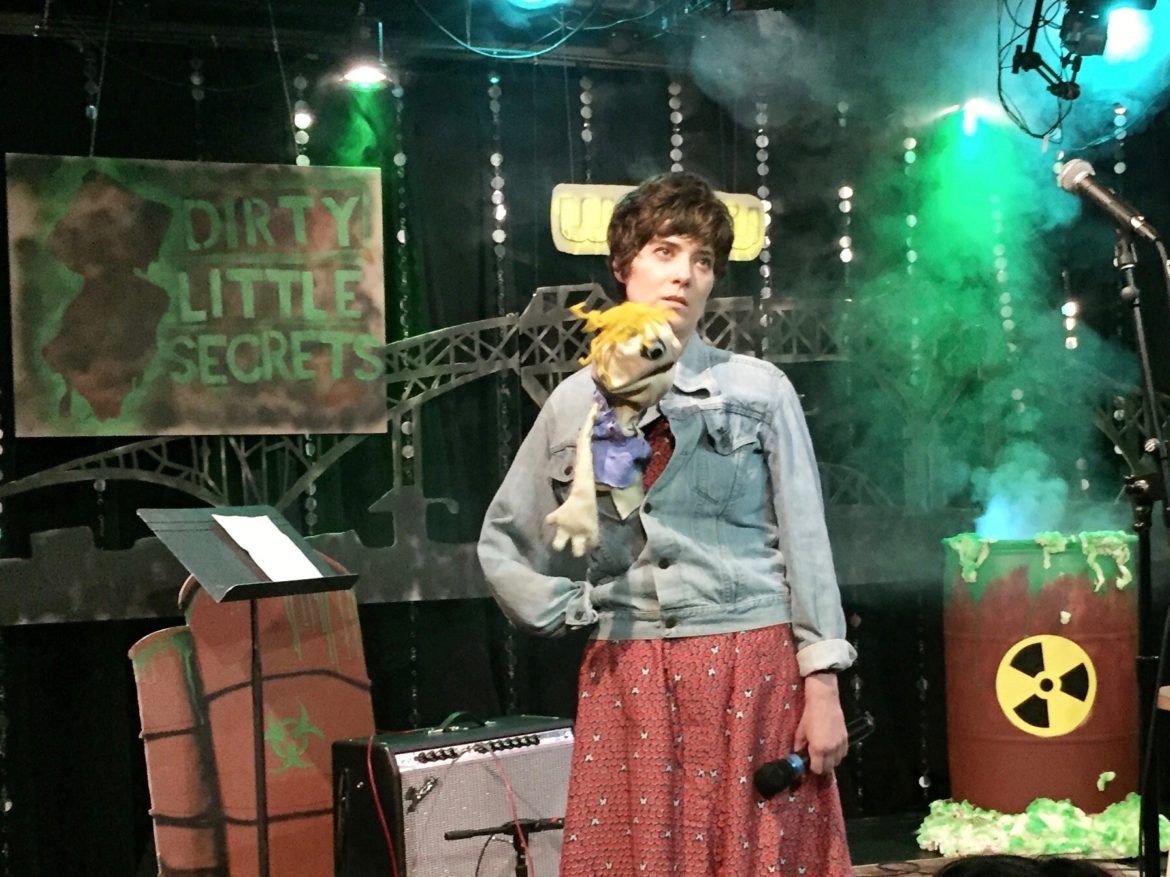 “I was finding out that there is a huge lead poisoning problem among children in New Jersey, which shouldn’t be any problem because it’s not 1975,” bespectacled comedian Jo Firestone told the audience inside Monty Hall, a performance venue next door to freeform radio station WFMU in Jersey City.

She spoke pleadingly, and in helpless starts and stops: “Well, what do you do when there’s something corrupt and terrible? What do you do?”

“You write an angry letter.”

Firestone handed out ready-made angry letters with WFMU envelopes that the audience would address to the governor, while leading the crowd in a chant, “Ang-Ry Let-Ter!”

There were several blanks in the text for the audience to fill in together. “It’s kind of going to be like Mad Libs,” she said.

“Did you know that New Jersey has more Superfund sites than any other state in America?”

She prompted the audience: “Now we need an expletive.”

“Fucking!” yelled a rowdy man near the front of the stage.

She continued: “‘Fucking money to prevent lead poisoning has been slowly disappearing, even though New Jersey children are still getting lead poisoning, and all the other organizations said it’s ‘not their fault’ so it looks like my only option is you, my _____?’”

“Dad?” Firestone said, repeating an audience suggestion in a tone that asked, Did you really mean to say that?

Another man offered “Führer,” German for “leader,” but often associated with Hitler.

Firestone continued: Since 2004, $53.7 million has been diverted from an anti–lead poisoning fund to the state’s general treasury. More than 3,000 children are lead poisoned. “‘You have it in your power to make it so that zero children suffer from lead poisoning in New Jersey,’” Firestone said.

The exercise continued, weaving in equal parts silliness and facts based on Dirty Little Secrets — a collaborative investigative reporting project whose partners include public, independent and nonprofit media — on the local impacts of New Jersey’s toxic legacy. Billed as the “Toxic Comedy World Tour,” even if one-night-only, the lineup of comedians drew from environmental reporting to marry journalism and comedy.

“I think Lenny Bruce said, ‘Comedy is tragedy plus time,’” said Ken Freedman, manager of WFMU, which organized the Sept. 10 event alongside the Center for Investigative Reporting. “Here we’ve just eliminated the time out of our equation.”

Or did Bruce say “satire”? Either way, comedy fits.

Some of the night’s recurring themes were uncomfortably present: 89 percent of New Jersey residents live within a mile of a toxic site. “You put them all on a map, and all of New Jersey is like one big red dot,” said New Jersey Public Radio reporter Sarah Gonzalez, who joined the comedians on stage for a 30-minute question-and-answer session that closed the show and added more context to the laughs.

Many of the comics drew from Gonzalez’s reporting, including coverage of the toxic fish exchange program — you read that right — organized by dozens of companies guilty of longtime pollution that has made the “Passaic River and its inhabitants a contaminated, carcinogenic stew,” Freedman said. Rather than clean up the river for $1.7 billion, the companies invite locals to bring their toxic catches to a tent in Lyndhurst, N.J. — “that should be a red flag right there,” Freedman said — in exchange for farm-fresh tilapia.

But when the tilapia didn’t grow to maturity fast enough, fisherman were given Costco frozen fish instead. The effort has collected 170 toxic fish at a cost of $1.1 million. “That’s $6,500 per fish,” Freedman said.

To compound matters, nobody knows how to dispose of the contaminated catch, which can’t be eaten, tossed or burned without creating a hazard. So they’ll be buried in New Mexico.

“There’s incredible absurdity when you start digging into this stuff,” Freedman said.

There’s also academic rigor. Caty Borum Chattoo, co-director of the Center for Media & Social Impact at American University’s School of Communication in Washington, D.C., is examining comedy as a vehicle for serious public engagement of social issues. She’ll release her findings, “The Laughter Effect: The [Serious] Role of Comedy in Social Change,” in coming months.

“What we learned, in a nutshell, is that comedy in social issues and social change is actually pretty precise, and a lot of times we’re getting it wrong,” Chattoo said. “Comedy works persuasively when it’s really funny because people are mentally engaged and deeply emotionally engaged. But the minute it’s only a little bit funny it doesn’t work.”

“You have to let the comedy go all the way.” — Caty Borum Chattoo, American University

Hence, comedy isn’t effective when it’s safe. “You have to let the comedy go all the way,” Chattoo said.

Being hands-off with the comedians caused a “tiny bit of friction between me and the CIR people,” Freedman said. “I think there were a couple of times when I said, ‘No, there’s no point in having a meeting with the comedians and lawyers. Nothing could be worse than that,’” Freedman said. “I kind of wanted to put a whole lot of information at their disposal and leave it to them to come up with it.”

Freedman was right to push back, said CIR’s Cole Goins, senior manager of engagement and community collaborations. In other creative partnerships, such as theater and poetry projects, CIR has taken an intensive approach to fact checking and lawyering the output, but hosting a stand-up comedy show was an entirely different experience and product. “We were learning about what kinds of oversight were best and appropriate as we designed this experiment in real time,” said Goins, who moderated the Q&A at the end of the show.

Comedy shows like The Daily Show, Last Week Tonight with John Oliver and Full Frontal with Samantha Bee blur the line between news and entertainment. Freedman argues that the popularization of fake news comedy has rewritten the rules of journalism — so much so that, right now, it’s where to go to find some of the best journalism.

“I think one of the biggest problems in journalism these days is faux objectivity,” Freedman said. “‘This side says this; that side says that. Who’s to know what really happened?’ That’s such bullshit, and that is the way a lot of mainstream news is.”

Comedy approaches the question of objectivity by focusing on facts. “I think comedy might be one of the last places in the media where facts still matter,” Freedman said.

Barriers to understanding issues are lowered for people who first experience a social issue through comedy in a faux news show, because the writers have to strip out all the wonky bits to make it funny, Chattoo said. People in the audience can become more interested in that issue over time and seek information from more serious resources.

“That points to the way that journalism and comedy have a symbiotic relationship that would be unexpected,” Chattoo said.

During Toxic Comedy, the comedians, all professionals, drew from the source material in varying degrees, and in less detail as the evening wore on.

“‘Did you know that New Jersey has more Superfund sites than any other state in America?’ Don asked the super-hot chick.”

“‘That’s horrible and we should do something about that. Now, why don’t you start by making a Superfund site out of this,’ she said, pointing at her crotch. Don was super-pumped.”

OK, maybe you had to be there.

Before leaving, attendees were asked to complete a survey that Chattoo and CIR will use to measure audience members’ attitudes and understanding of the issues as well as the comedy’s persuasiveness. The findings will be included in a separate report by CIR.

Comedy doesn’t work for every issue, and should be approached with caution, Chattoo said. It’s OK to poke fun at the powerful, but not the powerless. Some comedy is universal, while other forms are culturally specific. There isn’t evidence, yet, that comedy leads to overt behavior change, although it can raise awareness.

Prior to the show, Hill told Current that he was enlightened by the source material that CIR and WFMU provided.

“You always hear the jokes about New Jersey being a dump or a wasteland or whatever, and then you read this stuff and you’re like, ‘Oh, wow, there really is some truth to it,’” Hill said.

“We should clean up these messes,” he added.

And in a semi-serious moment, Hill perhaps touched on best hoot of the night: If we choose to be apathetic about New Jersey’s toxicity, the joke’s on us.