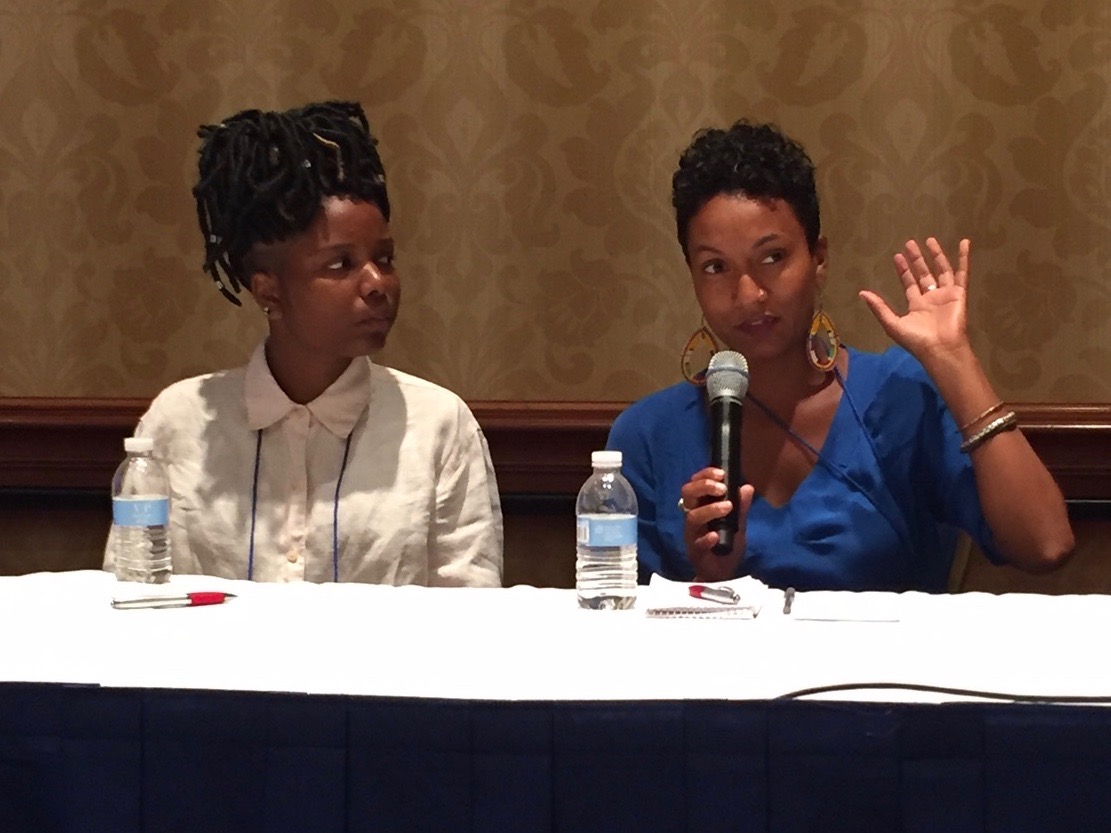 “I’ve noticed that the magic happens when the adults are not in the room,” said Nuala Cabral, manager of Philadelphia’s Poppyn. Cabral, right, and Poppyn alumna Stormy Kelsey took part in a panel about youth media Friday at the National Association of Black Journalists/National Association of Hispanic Journalists conference in Washington, D.C. (Photo courtesy of Poppyn)

Young reporters can energize stories. They need only the right balance of structure and freedom to brainstorm and create.

This was one piece of advice offered by young people participating in youth media programs and their mentors who shared tips for unleashing the “Power of the Youth Voice” during the National Association of Black Journalists/National Association of Hispanic Journalists conference in Washington, D.C., last week. Here are more tips for engaging youth and making the most of their skills and unfiltered perspectives.

Radio Rookies, a longtime New York Public Radio initiative that trains teenagers to tell their own stories, encourages participants to home in on what they know. Identifying story ideas often begins by asking, “What stories can you tell uniquely well?”

For example, Radio Rookie Edward Munoz told a story that was distinctly about life in New York by talking to people about the use of slang. Munoz said the story was pitched to him and that he was 100 percent up for it because he uses slang.

Young people need to have buy in

Mentors and young people need to find a balance between the stories young people come up with and those their mentors want them to cover. Regardless of what they pursue, they need to buy in and feel excited about their work, several panelists said.

High-school students deal with many competing responsibilities and interests. Radio Rookies and Poppyn, a youth news show on Philadelphia’s public access channel, provide students with small stipends. But ultimately the work has to be worth their investment.

Poppyn, which stands for “Presenting Our Perspective On Philly Youth News” and is slang for cool, encourages teens to cover topics that other youth care about, like education and the Black Lives Matter movement. Experiences of students in foster care inspired a recent episode.

Sometimes, the magic happens when adults leave the room

Supervisors, like editors, tend to focus on deadlines and what needs to happen in order to be productive. But when working with youth, sometimes adults need to step back.

“I’ve noticed that the magic happens when the adults are not in the room,” said Nuala Cabral, who manages Poppyn. Cabral’s students enjoy coming up with music and skits. “And if skits is what’s going to help them stay motivated when we’re feeling and talking about serious issues like corruption in the foster care system or youth homelessness, black youth being murdered by police, we’re going to make sure that they have time to have fun and come up with creative skits and rap songs and whatever else,” Cabral said.

Empower youth to own and create the means of production

As a program of WNYC, Radio Rookies is connected to a large, well-established news organization. The program aims to make participants feel like they can be a part of public radio while also empowering them to create something completely different.

“Young people today are not listening to NPR,” said Veralyn Williams, a Radio Rookies graduate and managing editor of the investigative news site Brooklyn Deep. “If they do, maybe they’re listening to it on a podcast, or some kind of streaming service. So having them be able to create what news can feel like and look like and how they can disseminate information, I think, is so important.”

Stormy Kelsey, a 19-year-old who participated in Poppyn as a high-school student, says she enjoys creating news and hearing how people feel about issues. But the highlights of Poppyn are screenings that draw the community, where “everyone is together,” Kelsey said. Community screenings, organizers say, can promote the students’ work and advocacy around a social issue.

Take advantage of the skills and knowledge young people already have

“This generation is intuitively growing up with technology in such a way that it’s part of their thinking process,” Jackson said. “It’s like riding a bike for some of them.”

Adults sometimes fail to take advantage of those skills or recognize students’ abilities. “A lot of times, adults want to be gatekeepers of how to do a thing,” Jackson said. Instead, they should encourage young people to use their skills for good.

“Young people know how to produce video; they’re already doing it,” said Sarah Gonzales, a WNYC and New Jersey Public Radio reporter who moderated the panel. She added, “Meanwhile, newsrooms are spending all this money trying to train us to do all these things, and we don’t fully learn how to do them well.”

Be a professional, not a teacher

Munoz said working with Andrew Mambo, associate producer of Radio Rookies, wasn’t like working with a teacher. The two bonded when Mambo taught him how to produce, edit and cut video. Munoz also appreciated that Mambo gave him food.

Professionals want to share everything they know and often have more hands-on experience than teachers do, Kelsey said. “They want you to be better than them,” Kelsey said. “Teachers want to do that, too, but I feel like as a professional, you have more to offer than a teacher. … And you can connect with [students] on a more personal level as well.”

But you’re not their friend

Cabral said she sees herself as an educator to her students, not a parent. “You can be a mentor, but you’re not their buddy,” Cabral said. “There have to be boundaries.”

Kelsey, a college student who trains youth not much younger than she is, agrees. If she needs the group to quiet down and prepare for a lesson, they must respect her, she said. “I care about them. I care about their well-being, but I wouldn’t consider us friends,” Kelsey said.