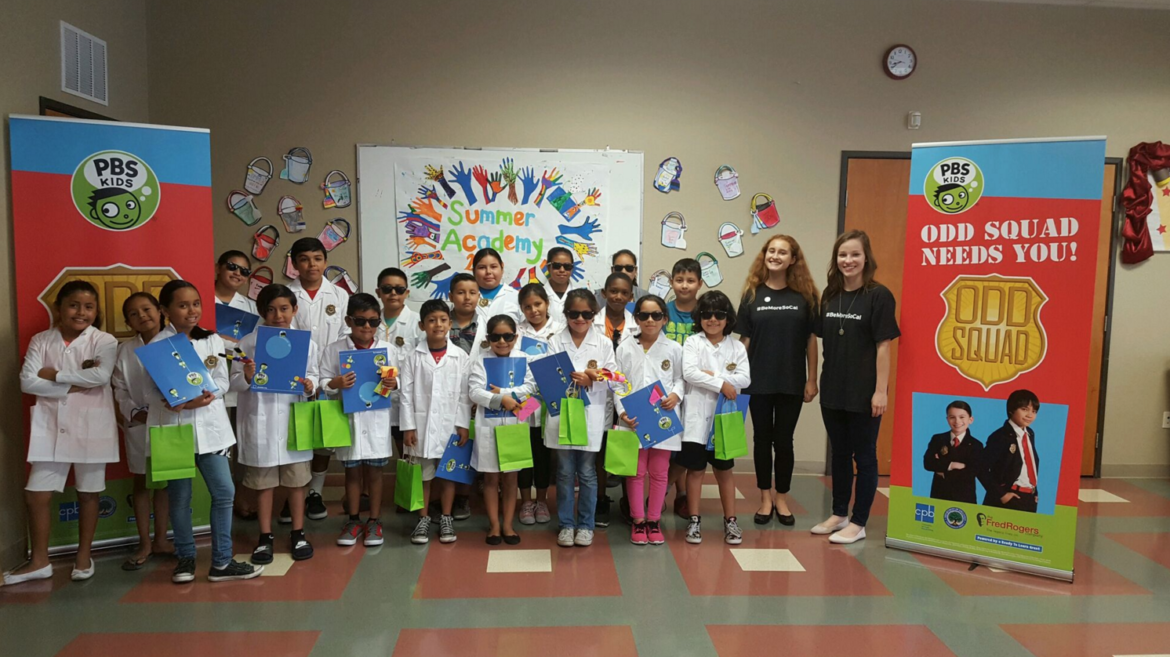 Public TV stations are gearing up for the release of Odd Squad: The Movie with screenings and events to promote the film.

Guest-starring 30 Rock’s Jack McBrayer and New Girl’s Hannah Simone, the movie debuts Monday on PBS Kids broadcast and digital platforms. Its release is part of a broader PBS promotional strategy to build audience for the live-action series, which is already popular with kids.

A Nielsen analysis for PBS reported that Odd Squad reached 10 million children during a one-year period beginning March 30, 2015, according to a news release announcing the movie premiere. Following the series’ debut in fall 2014, it attracted more than 600 million streams on digital platforms as of April 2016, according to Google Analytics.

Odd Squad is a live-action show that follows the adventures of Otto and Olive, two agents who use math concepts to solve unusual problems in their town. The show targets school-aged children aged 5 to 8 but also appeals to preschoolers.

The series has benefited from promotional support that PBS provides to stations as a part of its marketing strategy for select series. In addition to toolkits with on-air promos and artwork, the marketing team supports stations’ local engagement efforts by providing special promotional items — such as Odd Squad bookmarks, Ready Jet Go! frisbees and Nature Cat binoculars — to be distributed to members and viewers who attend community events.

“We are able to connect with a broader audience through social media and these community engagement events,” said Susie Grimm, early learning manager at PBS SoCaL in Los Angeles.“This is the type of outreach we see as important. We spread the word about programming while helping the community, which is a core part of our mission.”

In the hour-long movie, a rival group of adults called Weird Team runs Odd Squad out of business with a new gadget that appears to fix any odd problem. Odd Squad’s agents  return to life as regular kids until they learn what the gadget is really doing.

KTTZ started off early by bringing the film to the big screen early this month at the Alamo Drafthouse Cinema in Lubbock, Texas, as part of its ongoing partnership with the cinema. The station will use a $3000 Summer Learning grant to produce a second screening July 30 at the local Science Spectrum & Omni Theater. The event, which is free to the public, also will include interactive components such as activity booths and an animal show.

The events build on KTTZ’s engagement work through its Kids Club, which the station launched two years ago making full use of PBS’s promotional resources, said Marketing Director Becky Ivey. “ “We have over 1000 families as members of the club.” The club is free to the public and earns revenue through event sponsorships sold to local businesses.  Club members receive eblasts, invitations to events and a monthly newsletter.

The Community Idea stations based in Richmond, Va., are hosting a July 31 event that will include learning activities created by its Science Matters team, which produces multimedia science education content, and other community partners. The event mainly promotes science and math skills, but will also feature a reading area where children can practice reading.

“We try to connect folks to what we have on television,” said the station’s community engagement coordinator Brynn Markham.

Over 250 people have already registered to see Odd Squad: The Movie on the big screen in Richmond. Markham attributes this popularity to Odd Squad’s appeal to children of varying ages. “Eight and 9-year olds love this show just as much as the little ones. The fact that there are older children playing characters on the show instead of just animated characters makes it appealing to older kids.”

PBS SoCal teamed up with the Central American Resource Center for its August 1 event, which is a culmination of the station’s focus on Odd Squad for its summer outreach program. Kids attending will get to see Dalila Bela, the actress who plays Olive, and Odd Squad Co-creator  Tim McKeon, who will appear in person.

“Kids absolutely love Odd Squad and always tell us how they want to meet the agents and go to the headquarters,” said Grimm, “so we’re excited to have them as guests.”

One thought on “Stations engage local communities in lead-up to ‘Odd Squad: The Movie’”