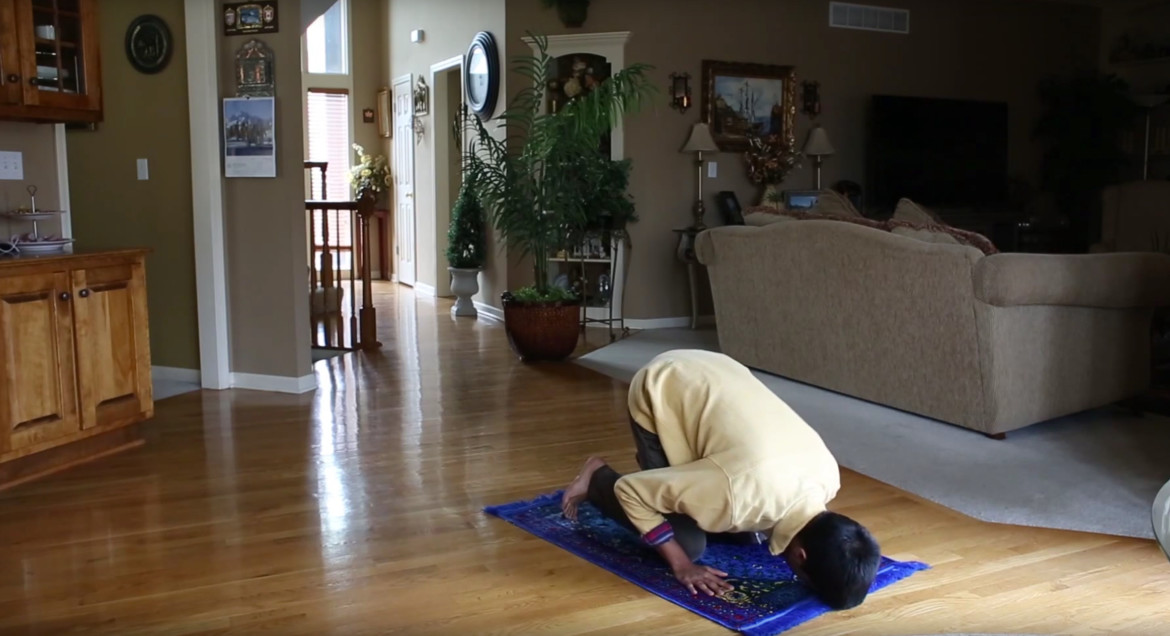 In a Beyond Belief video, local high school student Zaid Umar explains how he prays as a Muslim.

A nationwide outreach project is helping a public TV station tap into the deep roots of faith in its community.

KCPT in Kansas City, Mo., had previously covered religion only as news warranted, such as when three visitors were murdered at a suburban Jewish community center in 2014. But its project Beyond Belief is drawing the station into reflecting faith as it’s practiced among religious communities in its area.

The project is also amplifying and facilitating the work of congregants who are gathering across those faiths to tackle social problems.

Beyond Belief content and events run “From Easter to Eid” — April through June — marking Christian and Muslim holy days. But everyone involved is intent on the work continuing in some form at KCPT well after lead producer Steve Mencher has departed in July.

“This is laying the groundwork for us to cover religion in a more proactive way,” said KCPT President Kliff Kuehl.

As with past Localore projects, the Association of Independents in Radio has embedded independent producers within public stations to connect with diverse audiences that usually don’t access public media. Beyond Belief is one of 15 initiatives in Localore’s “Finding America,” which launched in November and runs through July 31.

AIR, backed by CPB, pays producers’ salaries and a basic budget for each project, with local stations contributing funding. Janet Saidi, KCPT news v.p., said AIR’s budget for Beyond Belief it $86,500, with KCPT adding $20,000. The station is also paying in-kind expenses such as promotions, freelance writers and staff time, she said.

Saidi has admired Localore’s in-depth storytelling and engagement. Working on a Localore project “has always kind of been on my dream list,” she said. Saidi oversees the station’s investigative Hale Center for Journalism, which contributes to KCPT’s robust schedule of local programs.

When Saidi mentioned Localore to Kuehl, he felt the same way; the initiative fit into his “mantra of connect, convene, collaborate,” he said.

So the station submitted a video for the Localore runway, in which stations present ideas for innovative approaches to audience engagement. KCPT produced a vibrant mash-up of local images over President Johnson’s remarks at the 1967 signing of Public Broadcasting Act, including the phrase, “What hath man wrought? And how will man use his invention?”

That triggered Mencher’s imagination. A former producer for NPR and Carnegie Hall, Mencher is also interested in social-justice issues. He remixed KCPT’s video with additions of his own and sent it back to the station. “That was the first step in the dialogue,” Mencher said.

“We knew that it would be a good fit,” Saidi said.

The two spent weeks brainstorming about what topic to tackle. Saidi approached departments within the station for suggestions, and found one strong theme: Staffers felt religion reporting was important but nonexistent.

“Everybody at every level, from Kliff to talk-show teams to digital designers, everyone loved that idea,” Saidi said. “And those early conversations got people talking about their own faith backgrounds. There was an interesting momentum around that topic immediately.”

‘Just get into that space’

The “traditional model” for religion journalism decades ago was feature stories relegated to “the back of the B section, not on the front page,” said Jerome Socolovsky, editor-in-chief of Religion News Service. The 80-year-old wire service provides in-depth, non-sectarian coverage to 100 news organizations and other clients worldwide.

But by the 1990s, journalists began to write about how religion and politics were intersecting, “so coverage became more about identity and culture, how Americans saw themselves and each other,” said Socolovsky, a former NPR correspondent.

Now, public media airs programs such as On Being and Religion & Ethics NewsWeekly, “but generally the feeling is that religion is over there, and our work in journalism is over here, and it’s in opposition to faith, religion and spirituality,” Mencher said.

One Beyond Belief video profiles Jaime Banyalmarjeh, who converted to Islam for her husband. (Photo: Lara Shipley)

Beyond Belief “is proof of concept that journalists can take religion seriously as an important voice for social action and change in ways that other institutions aren’t,” he said.

Saidi and Mencher wanted to explore and assist that social-action work within Kansas City’s spiritual communities. Mencher, who lives in suburban Washington, D.C., moved to Kansas City to get to know members of various religious groups.

Initially, “we thought, let’s get together people of different faiths to share a meal and talk,” Saidi said. “But when Steve dug deeper, we realized that people were already doing that. The interfaith dialogue was really exciting — but public media was left out. So we decided to help facilitate those discussions and put a microphone to them.”

“We’re finding ways to make KCPT the nexus for the connection that people have across religions,” Mencher said. “We don’t only do that only with television or audio, but by getting out into the community.”

Saidi was a bit startled when AIR suggested not filming or recording initial meetings with groups. “They advised us to just listen and engage,” she said. “Just get into that space. Think of it less as getting information and more as gaining an understanding.”

Mencher heard about a suburban Hebrew school planning a trip for black and white students to the Civil Rights Trail in Alabama; a local church supplying volunteers at a residential substance-abuse facility; and congregations coming together to brainstorm over fighting institutional racism.

He also heard that nonreligious people wanted to participate as well. “That’s why we don’t use the term ‘interfaith,’ because we want to include nonbelievers,” Mencher said. Oasis, a local group of secular humanists and atheists, wanted to be included. “They hadn’t always felt they had a place at the table,” he said.

Producers also discovered that religious groups were engaging around “some of the biggest issues” in the community, Saidi said, such as hate crimes, immigration and youth violence. “Not just religious topics,” she said.

Mencher also realized that the community’s reaction to terrorist attacks in Paris and San Bernardino, both linked to radical Islamists, “would be a key way into our project.” One of the first stories, a collaboration with KCUR-FM, covered former Mayor Emanuel Cleaver as he supported the local Muslim community by attending a holiday gathering.

A Beyond Belief panel interacts with the audience during Beyond Belief’s “Muslim in the Metro” event March 7. (Photo: Steve Mencher)

That grew into a series of profiles about being “Muslim Like Me” by local writer Inas Younis, a Muslim and interfaith activist, along with videos and photography creating a multimedia package.

The kickoff event for Beyond Belief was “Muslim in the Metro” on March 7, co-produced with American Public Square, a local organization promoting discussion “across boundaries and borders.” More than 240 people sold out the venue for the event, which focused on the lives of Muslims in the area. Kansas City Week in Review, the station’s weekly news magazine show, aired a one-hour special on the topic March 25.

But that’s just the start:

But drawing underserved audiences through faith coverage and interaction will continue after Mencher is gone. One of Kuehl’s first requests of Mencher was “to help us build muscles to do work in this area on a go-forward basis,” Kuehl said.

One of Saidi’s favorite aspects of Beyond Belief is the group of four community producers from diverse faith and cultural backgrounds that’s helping shape content. They provide a crucial insider’s perspective, she said.

Mencher thinks bringing more of those producers into KCPT is one good way to keep the initiative alive.

“What’s important to me is how the religious communities in town are working on division and inequality in Kansas City,” he said. “If I were here, I’d agitate for a multimedia production and training group” located east of Troost Avenue, the racial dividing line in the city.

“I know we’ll be doing work in this space after the initial project ends,” Kuehl said. “We’re having conversations now about fundraising and making sure we have the resources to put behind it.”

This post has been updated to include details about project funding for Finding America and Beyond Belief.