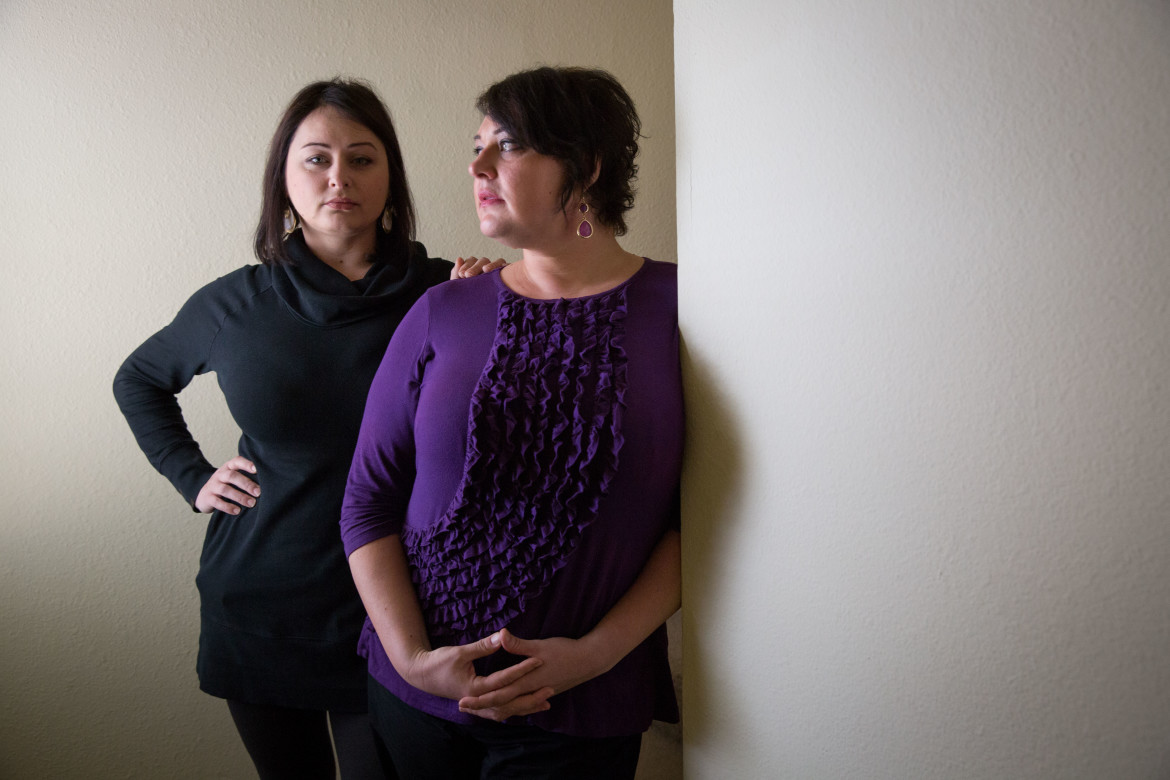 Portraits of Anastasya (black sweater) and Oksana Isthmian (purple), both sisters, in their apartment in Chattanooga, Tenn., on Monday, Dec. 21, 2015. Photo by Kevin D. Liles for The Center for Investigative Reporting

Oksana and Anastasya Istomin worked at a staffing company where they say they were asked to hire people based on race. Their story is part of a Jan. 9 episode of Reveal about discrimination in the temp industry. (Photo: Kevin D. Liles, CIR)

Public media has a critical role to play in balancing the enormous deficit in public service journalism since the collapse of the legacy news business.

The field has made progress towards this through new national initiatives, such as NPR’s Political Reporting Partnership and an expansion of local news capacity at many radio stations. These changes are laudable, but they are not enough.

To truly close the gap in enterprise reporting and meaningfully cover the most important issues in our communities, public media must invest in journalism that shines a light in the darkest and most difficult places.

On Jan. 9, Reveal, a public radio series from The Center for Investigative Reporting and Public Radio Exchange, begins life as a weekly national show. It has been built on collaborations with investigative reporting newsrooms around the country. Reveal is one way the journalism gap will be filled, offering a consistent platform for original public service journalism on critical issues facing communities and the nation.

There has never before been a public radio show and podcast wholly dedicated to investigative reporting. And it’s easy to understand why. Investigative reporting is hard work. It takes time, experience and resources. It takes determination and creativity to translate data and document-heavy reports into compelling narrative storytelling. It takes courage to stand up to the powerful, and leadership to stand up for that most essential right of a free press. In an age when newsrooms continue to be decimated by click-bait economics and shortsighted vision, most of our communities have lost local news organizations that are capable of producing investigative reporting that shines light on injustices.

Against this backdrop, there are signs that a second golden age of investigative reporting is in the making. The nonprofit investigative reporting model, which CIR helped pioneer in the 1970s, has been embraced in recent years by a proliferation of news startups, from the Investigative Reporting Workshop to MinnPost and NJ Spotlight. Some of the most popular news websites have built impressive investigative teams. In public media, stations such as Minnesota Public Radio and New York’s WNYC have invested in investigative reporting. But much of the excellent reporting created by these news organizations doesn’t reach public radio listeners on a consistent basis. That’s where Reveal comes in.

Reveal was born out of a dynamic collaboration between CIR and PRX. CIR has a 38-year history of producing groundbreaking multiplatform investigative reporting that has exposed injustices and improved communities across the U.S. As the leading digital platform for public media audio and applications, PRX is the disruptive force for good in public media. CIR’s and PRX’s commitment to creating Reveal is rooted in our shared responsibility to sustain the critical role of public service journalism in our democratic society, and to build capacity for more public media organizations to produce and engage audiences through that reporting.

We see Reveal’s expansion as an opportunity to build a tentpole series that stations and partners can leverage as they develop their own capacity to go after stories and engage their audiences. And we believe communities will respond by supporting stations that are committed to covering stories that matter and make a difference. Our thesis is that by delivering great investigative reporting, stations can achieve sustainability by becoming the essential news source in their own communities, which will lead to increased membership and philanthropic support.

When we made the decision in July 2013 to develop Reveal, we knew we needed to move quickly. In a rapidly changing media environment, we recognized that our ability to capture a new public radio audience attuned to original investigations had a limited time frame.

We launched the first pilot episode in September 2013 and produced two more in 2014. In 2015 we expanded production into monthly episodes and tested some basic ideas. How could we support station newsrooms to produce more investigative reporting on their own communities that would be compelling to the national audience reached through Reveal? How could we marry character-driven narrative storytelling with deeply researched, often data-centered, investigative reporting? Could we help drive a national conversation, and ultimately societal impact, from these stories? Could we use Reveal to consistently bring new and diverse voices to the national stage? And what kind of production team and network of collaborators did we need to attract to pull this whole thing off? Finally, would there be funders that shared our bold vision?

Over the course of the past two years, we have begun to answer many of these questions.

In our first pilots, we worked with Chicago’s WBEZ on its investigation into the heroin highway, St. Louis Public Radio on Missouri’s controversial source for execution drugs, and Michigan Radio as it did extraordinary work to localize a Center for Public Integrity investigation of unsafe arsenic levels in drinking water. More recently, WAMU in Washington, D.C., contributed a major investigation on the racial disparities in policing in the nation’s capital. The reporting by Patrick Madden was done in collaboration with the Investigative Reporting Workshop based at American University, WAMU’s licensee. We worked with the Investigative Reporting Program at U.C. Berkeley and San Francisco’s KQED to tell the story of sexual abuse and exploitation of female janitorial workers, part of a collaboration that also resulted in television documentaries for Frontline and Univision. And, most recently, we partnered with New Hampshire Public Radio’s health and science reporter Jack Rodolico last November to unveil 40 years of alleged abuse and neglect of people with disabilities at specialty rehab centers across the U.S.

In addition to public radio stations, we have developed partnerships and co-productions with the Center for Public Integrity, Texas Tribune, Frontline, the Investigative Fund, the Houston Chronicle, Bloomberg Markets magazine, the Seattle Times, among many others, to bring their best reporting to public radio audiences.

We are constantly working with partners to take their deeply reported stories, which are often based on data and documents, to find the underlying universal human stories that Reveal’s listeners can connect with. This approach is leading to impact and results. This past year, reporting featured on Reveal has prompted congressional hearings on the over-prescription of opiates to military veterans by the Veterans Administration medical system, increased accountability of oil companies for worker safety and the introduction of potentially sweeping school police reforms in Virginia.

Many of these stories are bringing voices to the airwaves that are not often heard on public radio. Reveal is hosted by Al Letson, formerly of State of the Re:Union, who has a long track record of bringing community voices to public radio. The Reveal team is made up of young producers working alongside veteran radio editors and reporters. The diversity of the team can be heard in the stories we choose to tell, the ways we tell them and the characters and sources we feature on the show. For Reveal, diversity is not a marketing slogan or a lament; it is a strategic advantage. It allows us to find, report and deliver stories from diverse communities often left out of the reporting cycle. Through our direct engagement in communities, it provides us with the sensibilities and sources to produce Reveal for audiences typically missed by public media.

Over the course of the last two years, as we’ve proved that there is an appetite for this kind of reporting among stations and their listeners, we found a handful of key funders who shared our vision. The Reva and David Logan Family Foundation, Ford Foundation, John S. and James L. Knight Foundation, Ethics and Excellence in Journalism Foundation, Wyncote Foundation and a small group of major donors have all invested in bringing the show to life. The John D. and Catherine T. MacArthur Foundation provided the seed grant for the first pilot episode and continues to provide major support to CIR and PRX. Our funders share our mission to make Reveal a showcase for the value of journalism in the public interest.

For the show to succeed weekly, and for newsrooms across the country to increase investigative reporting that is critical to democracy, this kind of reporting will need greater philanthropic support and diversified revenue streams.

As the nation’s first nonprofit investigative newsroom, CIR understands the financial challenges of nonprofit investigative journalism, and we are committed to supporting stations in their fundraising strategies to support their own investigative reporting. We are partnering with Michigan Radio and KCPT in Kansas City, for example, to explore new audience engagement and development strategies that will raise funding for their investigative work. We have seen that stations do want to invest resources in public service journalism, and when they get the resources and support they need to do it, deliver quality, high-impact work. We are counting on their contributions to closing the gap in public service journalism by bringing their voices and reporting to Reveal.

As we have climbed towards the launch of Reveal as a weekly show, one idea has remained in sharpest relief: the requirement that our journalism positively impact the communities we report from, about and for.

Investigative reporting is hard. Weekly production is hard. The challenges and risks in our path are real, but so are the many tough issues facing our country. If we’re going to make progress together, we need fact-based, unbiased reporting to provide context and insights that help shape solutions to the problems we identify.

CIR and PRX have made a commitment to put everything we can into Reveal’s success. We need our public media community to make this commitment with us. Let’s get started.

As c.e.o. of the California-based Center for Investigative Reporting, Joaquin Alvarado has helped lead development of Reveal and the co-production partnerships that support its expansion into a weekly series. Before joining CIR in 2012, Alvarado developed innovation initiatives as a senior executive for the American Public Media Group and CPB. Earlier in his career, Alvarado founded CoCo Studios, which promotes media collaboration and game development for fiber and mobile networks, and served as the founding director of the Institute for Next Generation Internet.

Christa Scharfenberg is head of studio for CIR. She helped launch Reveal and now oversees the show’s long-term growth and business goals. She is part of the team that is currently developing a Reveal documentary film strategy.

John Barth is the chief content officer at PRX. He has helped create many successful public radio programs, including Marketplace and The Moth Radio Hour, and has been in senior roles at Audible and AOL.

Correction: An earlier version of this story incorrectly described the staffing company that is the subject of Reveal’s Jan. 9 report on the temp industry.