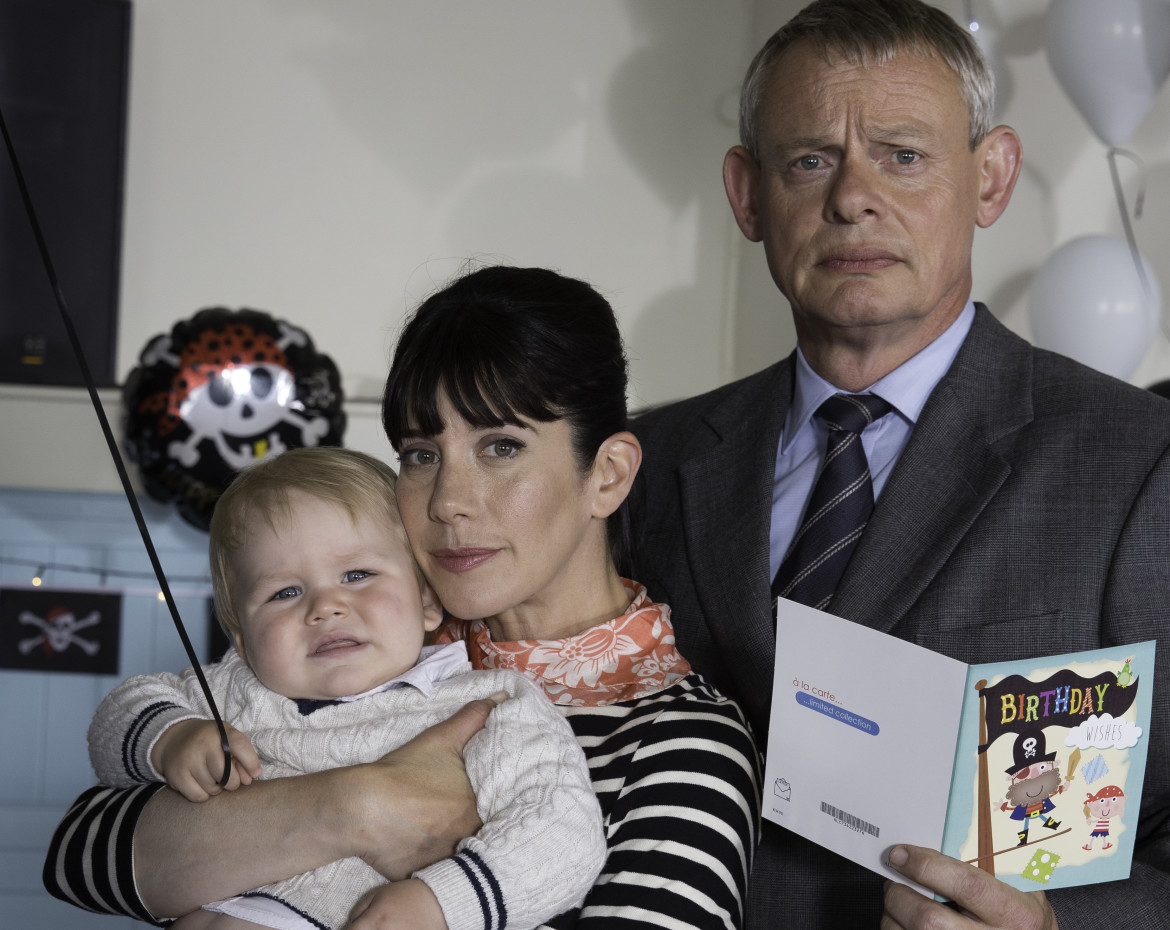 Louisa (Caroline Catz, center) tries to give son James a pirate-themed birthday party, but Doc (Martin Clunes) just can't get into the spirit on this season of Doc Martin. (Photos: APT)

“There are lots of stories we want to explore, and we want to do them well,” series producer Philippa Braithwaite, wife of star Martin Clunes, told Current. “I think we’ll know when it’s time to end the show.”

That’s great news for fans, so crazy for the hit Britcom that they call themselves “Clunatics.”

Their passion for the quirky characters that populate the fictional English fishing village of Portwenn has catapulted the title to multiple adaptations worldwide: In Austria, there’s Der Bergdoktor; the Netherlands, Dokter Tinus.

A U.S. version for commercial TV is now in the works, from Executive Producer Marta Kauffman (Friends, Grace and Frankie).

But fans — as well as the cast and crew — are constantly playing a nervous guessing game as to when the original British series could end.

Portwenn is played by Port Isaac in Cornwall, England.

New episodes are filmed every other year from March through July in scenic Port Isaac, a sleepy burg in Cornwall. On its home network of ITV, Doc Martin remains the highest-rated Monday show outside of longtime soap operas.

Braithwaite said each season is created so that it could be the last. “We never know when we finish if we will make another” season, she said, “so we finish deliberately so we could leave it right there.”

She admitted that Season 6 was the exception. Viewers were left with an emotional cliffhanger: Martin’s frustrated wife Louisa (played by Caroline Catz) had retreated to Spain with their infant son James to visit her mother, with no planned return date. Martin was left to wonder if, given his personality quirks, he should be married at all.

The new season finds the couple in counseling to salvage their shaky union. The ongoing story of their romance is at the heart of Doc Martin, and this plot development is Braithwaite’s favorite part of the new episodes. “I loved the therapy sessions and how we managed to spin those off into storylines,” she said.

Louisa and Martin in a rare, almost-content moment.

At the end of Season 6, “Martin needed to do work on himself. But we thought that might be dull, if he just went alone” to a therapist, Braithwaite said.

Braithwaite sought advice from an actual counselor, who replied that in her practice, she wants to meet both parties. The therapist “gave me a sheet of exercises for couples,” which Braithwaite wove into the plot with predictably hilarious outcomes. Martin must embrace Louisa three times a day; when one hug goes on a bit too long, he sternly admits, “I can’t let go, my watch is snagged on your cardigan.”

Braithwaite is especially proud of the scenes of Martin and Louisa interacting with the counselor. “Those played really well,” she said. “We tried to keep it real. But, for our show, it’s always just a step to the left.”

Through the counseling sessions, “we were able to peel a few layers away for both of them,” enabling viewers to get to know the main characters and their motivations more deeply, she said.

Allowing each character in the ensemble cast to grow yet retain the unique personality traits that fans have come to love is an ongoing challenge, Braithwaite admitted.

“We try to give the cast enough to do that’s different, but let that evolve in a natural way,” she said. Part of success of the show, Braithwaite believes, is that fans feel comfortable with the characters, “so we don’t want to make huge changes.”

Perhaps the role that has undergone the biggest change is that of Louisa, “who went from being single and a bit uptight to married with a baby,” Braithwaite said. “So she’s having to learn to let go a little bit.”

Another fan favorite is the rotund Bert Large, the entrepreneurial plumber-turned-restaurateur whose dream of huge financial success is always just one scheme away. One difference viewers will notice: Actor Ian McNeice lost 80 lbs, which he discussed in the new pledge special Doc Martin: Seven Grumpy Seasons, now airing on stations through distributor American Public Television. McNeice said he met his goal of finally being able to squeeze through the extraordinarily narrow passageways in the tiny village.

And in Season 7 his character Bert may finally have hit on a viable idea. New episodes find him in yet another get-rich scheme — this one in a rickety trailer in the woods wearing a gas mask — that actually leaves him poised on the brink of a potentially lucrative career. “This time I think I’ve found my pot of gold!” Bert proclaims.

“That’s quite possible,” Braithwaite said. “We left him in a good place. I’ve been thinking about that: Everything always goes wrong for Bert, so maybe it’s time for things to go right for him.”

Bert’s son, Al (Joe Absolom), is chasing his own dream, fixing up a bed-and-breakfast he wants to call “Salmon Enchanted Place.” Financially backing him is Martin’s Aunt Ruth (Dame Eileen June Atkins), who faces her own medical conundrum. The hapless Police Constable Penhale (John Marquez) gets a Taser — and, yes, that plays out about as well as fans might expect. Guest stars include Sigourney Weaver, typecast as an American.

Buddy the dog (played by a scruffy mutt named Dodger) returns and even gets his own storyline. Braithwaite said that Dodger’s trainer, Sonja Turner, is working with another photogenic little dog, Paddy, “so Buddy may just get a pal” next time around.

Love both lost and found is an ongoing theme this season. The premiere opens with Bert nursing a heartache that propels his life in a new direction. Pharmacist Mrs. Tishell, her neck still swaddled in her trademark brace, gets a surprise visitor who prompts her to reconsider her ever-present crush on Doc Martin. Penhale goes gaga over Janice, baby James’ new nanny (Robyn Addison). The doc’s receptionist Morwenna (Jessica Ransom) finally builds up the courage to approach someone special for a date. Even Louisa ends up confronting romantic overtures from an unexpected source.

Some fans got an early jump on the season through on-demand screenings. Acorn TV, a streaming service offering British content, began offering the show a month after its debut on ITV. “Since its premiere in October, Doc Martin has been the most popular show on Acorn TV,” said Matt Graham, Acorn v.p.

APT has also allowed client stations to air episode 701 this month as a sneak peek of the new season. So far this month, the show has premiered in 62 markets. And 84 have signed on to air the pledge special Seven Grumpy Seasons, according to APT spokesperson Jamie Haines.

“I do have to say that the pledge break with the pooch just stole my heart!” she added. That includes a smartphone video that Turner filmed of Clunes, a huge dog-lover in real life, cavorting happily with Dodger on the beach.