Women who lead public media organizations, or those trying to attain top jobs with equitable salaries, find the same glass ceiling and pay gap that limit career growth for females in the larger workforce.

Women hold roughly 39 percent of the top jobs at television and radio stations in the 25 largest markets, according to Current’s first-ever study of executive pay and financial reporting by local stations. Though Laura Walker of New York’s WNYC tops the list of the highest-paid local pubcasting executives, she and a handful of other female leaders are exceptions to the much larger trend.

On average, women public media executives are paid about 83 cents for every dollar their male peers earned. The gap is wider when compared at the median, or midpoint of the highest and lowest salaries, at which women earned 73 percent of male executives.

Current found disparities in gender representation and compensation among public media executives by analyzing the most recent financial documents of 85 CPB-qualified stations located in the top 25 designated market areas. Most stations disclosed salaries of their highest-paid executives, such as the general manager, president, chief executive officer or executive director, on their annual tax documents, audited financial statements or equivalency statements required by CPB’s Community Service Grants. Eleven stations either did not post salary information to their websites or declined to provide information.

“It definitely mimics what we see in the workforce at large,” Milli said of the Current study. “It’s even more interesting because it’s looking at people doing the same job and yet seeing a pay gap that, while smaller, is still significant.” 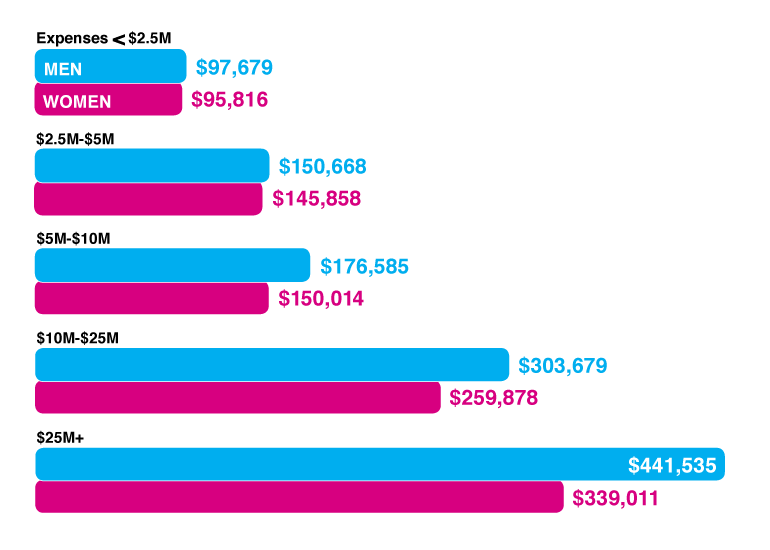 The gender pay gap narrows as station budget size drops and almost vanishes among stations with budgets of $5 million and below. (Chart: Kelly Martin)

These calculations lack data from the 11 stations that declined to provide financial documents. Two of the stations that didn’t participate are university-licensed radio stations that produce national content for NPR — WBUR in Boston and WAMU in Washington, D.C.

Among the executives leading the seven national organizations in our survey, PBS President Paula Kerger earned the biggest salary. Her compensation of $779,954 in 2012, reported in the network’s most recent Form 990, outranked the $756,575 that Gary Knell earned as NPR president in 2013, according to the organization’s 2013 Form 990.

The gender pay gap in the U.S. workforce has been well-documented in numerous studies, but the research rarely provides useful benchmarks for the nonprofit sector that includes public media. One recent study looked at nonprofit workplaces in southwestern Pennsylvania, near Pittsburgh.

The research, conducted by the Bayer Center for Nonprofit Management at Robert Morris University, was part of an advocacy project called “74%.” The analysis found that 74 percent of the employees at regional nonprofits were women, yet they held only a quarter of the top positions.

Many nonprofits lack strong human-resource oversight in setting compensation, said Peggy Outon, executive director of the center, who spearheaded the study. Without the influence of HR professionals, many nonprofits don’t follow structured processes to set employee pay standards, she said. Compensation decisions are often driven by feelings and personal connections, she said.

Decisions about salaries “are usually highly emotional,” Outon said. “A whole lot of it is based on personality or relationships with board members, so you have stuff all over the map when it comes to salaries. It’s often just kind of whatever the practice is within that entity.”

That approach is risky for nonprofits, which can come under glaring scrutiny for compensation decisions. Tim Delaney of the National Council of Nonprofits advises nonprofits to make sure they can defend their employee compensation. Nonprofits aren’t set up for personal enrichment, he said, but they are allowed to pay people for the value of their services.

As for decisions about how much to pay executive-level employees of either gender, he recommends adhering to a simple rule.

Under-represented at the top

Current’s analysis found fewer women in top management jobs at public media stations than the 52 percent in the professional ranks of the U.S. workforce reported in the Center for American Progress study. Among the 85 licensees included in the study, men held top jobs at 52 stations — representing about 61 percent of the executive workforce at major-market stations.

At Baltimore-based Livingston Associates, which assists stations in recruiting, about half of the searches the firm conducts place women or people of color in the jobs, according to Tom Livingston, chief executive. After reviewing data from the Current study, he concluded that there’s more work to be done to address the imbalance.

“Diversity is critically important to the system,” Livingston said. “It appears clear that we have a gender problem at the top job, and we should continue to address it.”

With women leaders at PBS, CPB and big stations like WNYC and KERA in Dallas, public broadcasting appears to have made progress in moving more women into executive positions. A look back at Current’s archives reveals how much effort it has taken. In a 2003 op-ed for Current, the late Cindy Browne pointed to changes in public television’s leadership over the previous 30 years.

“As a whole, the industry doesn’t have a good program or explanation of steps, for men or women, about what the path is to executive positions.”

“Yes, we’ve come a long way since the days when there were only three or four women g.m.’s in the room at public TV conferences,” Browne wrote. “When you look at it that way, the system has seen 700 percent growth in the number of female g.m.’s over the past 30-some years of its history. Impressive. On the other hand, these 31 women represent just 17 percent of the 178 g.m. positions in the system.”

At that time, one public TV station among those in the top 10 markets was run by a woman, Browne wrote. The next female manager she found was running a station in the 32nd largest market.

As of 2014, women were running 25 percent of the public television stations in the system, according to a study by CPB and PBS.

The public media career path for aspiring executives usually involves moving up from small-market stations, said Deanna Mackey, executive director of the Major Market Group, an affinity organization for PBS stations in the largest television markets. Sometimes they move into executive jobs by taking charge of organizations that are struggling financially.

“They’re getting that opportunity,” she said of female executives, “but it’s difficult.”

“As a whole, the industry doesn’t have a good program or explanation of steps, for men or women, about what the path is to executive positions,” she said.

Mackey took steps to address this in January by co-founding Public Media Women in Leadership, a CPB-funded program providing support and mentorships for women seeking executive positions within public media. After participating in a 2013 panel discussion with other women about diversity in the system, she recognized the need to open paths for more women to move into public media’s executive suites.

“There is definitely a stillness in our industry, a sort of holding of the breath, as the older workers figure out what their third act is going to be. And that leaves the workers behind them stuck.”

“I hit a tipping point where I said, ‘I’m tired of talking about this, and we need to do something about it,’” Mackey said. Through a closed Facebook group, the program provides a virtual meeting place for women to post job leads, talk with mentors and arrange webinars. Its membership has grown to 1,000 since its launch, she said.

“I think public media is one of the most important services in America,” Mackey said. “What we need to do is make it a place where women want to come for a career.”

The initiative addresses one of the frustrations of many mid-career women, who often find that their career trajectory stalls before they make it into an executive job. Or, in other words, hit the glass ceiling.

In her research for the “74%” project on nonprofits in southwestern Pennsylvania, Outon was struck by how many of the women she interviewed described a career plateau. Their accounts followed a similar pattern, she said: Executives who delay their retirement, typically described as baby boomers, limit opportunities for younger aspiring executives to advance.

“I was really struck by the women in their late 30s and early 40s who said they just felt stuck,” Outon said. “There is definitely a stillness in our industry, a sort of holding of the breath, as the older workers figure out what their third act is going to be. And that leaves the workers behind them stuck.”

Researchers who study pay discrepancies expressed muted optimism that the gender gap will close anytime soon, especially given the slow pace of change in today’s workplace.

According to IWPR’s projection, if efforts toward pay parity continue at the same rate as they have for the past five decades, the U.S. workforce will achieve pay equity by gender in 2059.

The significant strides that employers made to increase women’s pay in the 1960s and 1970s “started kind of fizzling out” in the 1990s, said IWPR’s Milli. “We really haven’t made substantial progress since then.”

But the upcoming generation of female workers could be poised to change that. Within the Public Media Women in Leadership group, Mackey has observed stark generational differences in how members react to pay disparity.

This dynamic is not unique to public media, Milli agreed.

“We’ve definitely seen that millennial women care a lot about these issues and can’t understand why they even exist,” Milli said. “Hopefully, that will be a driver of action going forward.”

Having a vocal part of the workforce pushing for change might just lead to a rapid resolution, Outon said. She hopes issues related to women’s pay and representation will resolve as they receive increased attention.

“I’m 65, and this hasn’t gotten any better,” she said. “I just don’t want my daughters to be having these kinds of conversations 15 years from now.”