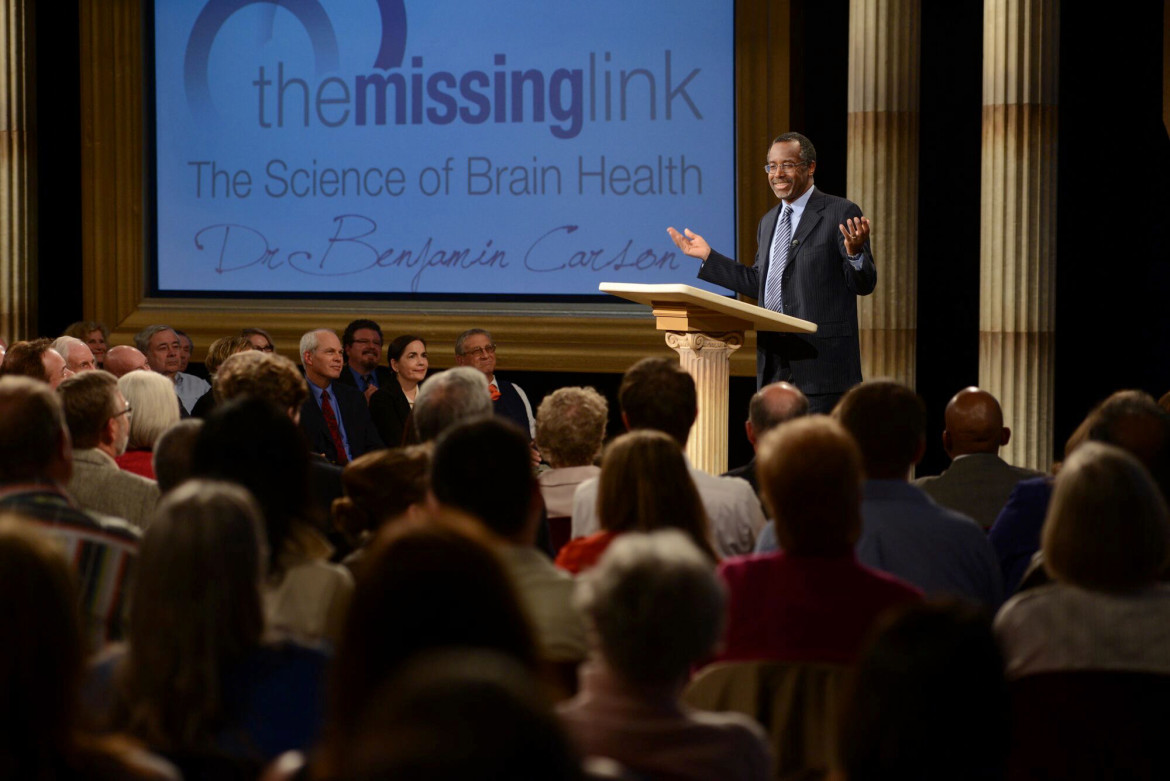 Carson speaks to the audience during the taping of the pledge program The Missing Link: The Science of Brain Health.

It’s not often that a public television pledge program ends up in press coverage of a presidential campaign.

The Missing Link: The Science of Brain Health, a 2014 show featuring neurosurgeon Ben Carson and distributed by Arizona PBS, came under scrutiny when reporters discovered that Carson, now a leading Republican presidential hopeful, suggested that viewers might find “glyconutrients” helpful.

The word is used in advertising by Mannatech, a supplement company. Mannatech paid $5 million in fines in 2009, according to the Texas Attorney General’s office, to settle a false advertising lawsuit after claiming its glyconutrient products cure cancer and other ailments.

Carson uses and has publicly praised Mannatech’s glyconutrient supplements, although the pledge special, presented by Arizona PBS, does not name the company. He also discusses glyconutrients in an interview on a related pledge premium DVD, Healthy Brain Tips with Dr. Ben Carson.

The sponsor of The Missing Link is The Platinum Group, a collection of independent distributors that sell Mannatech products.

A National Review story in January made the link between Carson and the controversial supplement company. Carson “spoke at Mannatech conferences in 2011 and 2013, and spoke about ‘glyconutrients’” in the Arizona PBS special “as recently as last year,” wrote Jim Geraghty, a regular contributor to the conservative magazine. The piece noted that Mannatech had a “long, checkered past” and in November 2004 the mother of a child with Tay-Sachs disease who died after being treated with Mannatech products sued the firm. The headline: “Ben Carson’s Troubling Connection.”

But Arizona PBS executives and the program’s producer see nothing troubling. “The program is about brain health, and there is only one mention of supplements and only in passing — it is not integral to the content of the program, nor is Mannatech ever mentioned,” GM Kelly McCullough told Current.

Nancy Southgate, associate g.m., content at the Phoenix station, said she vetted the program. “We were comfortable enough to offer the program to other stations,” she said. “I had no qualms with it.”

The Missing Link ultimately aired on at least 18 stations, an estimate based on premium requests because the station doesn’t track carriage, according to Henry Brodersen, e.p., development, at Arizona PBS.

“You just show up” 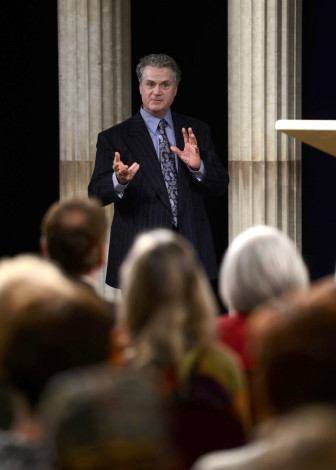 Taylor on the Missing Link set.

Taylor has been working with Arizona PBS since around 2006. He pitches pledge programs and often rents space at the station to produce them.

“I went to Channel 8 [Arizona PBS] and said, ‘What if I got a world-class neurosurgeon for a program?’ They said, ‘Absolutely,’” Taylor recalled. That was in 2013, when Carson, retired director of pediatric neurosurgery at Johns Hopkins Hospital, was starting to appear in the media promoting his new book, America the Beautiful: Rediscovering What Made This Nation Great.

Taylor cold-called Carson. “We talked for about two hours,” Taylor said. The producer suggested that a program on Carson’s approach to brain health could be popular with public television audiences; Carson agreed. “He felt good that it was for public TV, and decided to do it,” Taylor said.

“I told him, ‘I’ll set everything up, you send me an outline of your speech, I’ll incorporate it into a show, and you just show up,’” Taylor said.

Taylor’s firm, Taylor Media Group International, specializes in “mass media marketing communications,” according to its website. “I’ve been doing this for 40 years,” Taylor said in an interview. “I do marketing and promotion using media as my tool. The content is always going to be the talent. I just put creative around it.” Several years ago Taylor worked with another Republican hopeful, frontrunner Donald Trump, on a book tour.

Taylor also finds sponsors to pay for the pledge productions. For Carson’s program, Taylor initially approached Mannatech. Taylor was familiar with the company because a Mannatech associate had asked for assistance with television spots about four years earlier, he said. That time, “I visited with them, but we never did anything,” Taylor said.

Taylor also felt Mannatech would be a logical sponsor as Carson used its products. Carson had previously made several appearances at Mannatech conferences and appeared in videos online touting the supplements.

But Mannatech declined to sponsor The Missing Link due to “financial reasons,” Taylor said.

Michael Crouch, communications director at Mannatech headquarters in Coppell, Texas, told Current, “We certainly did not sponsor that show.” However, “I have no ability to characterize that situation, as anyone involved with the decision has since left Mannatech,” he added.

The Platinum Group of Mannatech distributors was interested, Taylor said. “Finding any sponsor or underwriter is always a challenge,” he said. “When The Platinum Group stepped up I was thankful. Little did I know that would be controversial.”

Creating the show and premiums

In January 2014, on the day of The Missing Link taping at Arizona PBS, a snowstorm delayed the arrival of Carson’s flight until 4 a.m. — with shooting due to begin just four hours later.

Taylor said the two created pledge breaks first. Then they taped Taylor interviewing Carson. “He’d never really spoken to public audiences, he’d always talked to his own peers about brain health,” Taylor said. “So we had to create premiums. He had no inventory” other than his 1996 book, Gifted Hands: The Ben Carson Story.

During Taylor’s interview with Carson for the premium DVD, the neurosurgeon mentions the importance of nutritional supplements due to the processing of foods. Taylor asks him to explain “what exactly” glyconutrients are. Carson discusses the topic for about three minutes, detailing how “sugars get a bad name” but “none of us could survive without sugars” because glucose “is the fuel for many cells.” 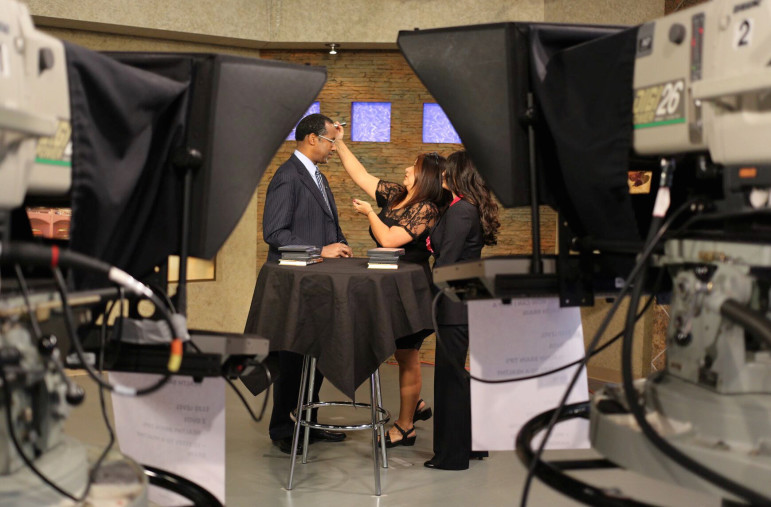 Ben Carson gets made up before his appearance on the pledge program.

An informational page on the Memorial Sloan Kettering Medical Center, a top research and cancer treatment facility, defines glyconutrients as “a group of sugars extracted from plants and thought to be essential for the body by helping cell-to-cell communication.” It adds: “Although sugars such as glucose are essential for normal functioning of the body, true deficiencies are rare except in malnourished patients” — which renders supplements unnecessary for most people.

About an hour into his speech before the studio audience, Carson also brought up glyconutrients. “These things are in apples and your bananas and your beets and in everything, you know, that’s growing,” he said. “But by the time we get them, they frequently are gone, and I discovered that you can actually concentrate them in powders and pills and things like that. There are a number of different types of vitamins and supplements that are there. I advise people to actually look into this.”

Despite the links between Mannatech, The Platinum Group and the word “glyconutrients,” Taylor didn’t see an ethical problem. “The show is completely compliant” with PBS production guidelines, “and the sponsor had no influence in the content,” he said.

Taylor said that after production wrapped, he approached Mannatech to promote the program. “I’m trying to get viewers,” he said. “But for some reason, I don’t know why, they were adamant about not wanting any involvement.”

Taylor said he finally convinced the company to mention the show. “They said, ‘Because Dr. Carson is a friend, we’ll point people to the show.’ But they did that very reluctantly.”

Mannatech posted an invitation on its website to a viewing party at its headquarters March 11, 2014, for the premiere of The Missing Link. “Dr. Ben Carson speaks on PBS [sic] . . . during which he will reference glyconutrients,” the invitation said.

McCullough, Arizona PBS g.m., said he did not know about that tie-in with the program. “We have no control over the Mannatech website, nor were we aware they were mentioning the program in any way,” he told Current.

After the National Review story appeared, reporters began peppering Carson with questions about his links to Mannatech — including during an Oct. 28 GOP debate. “I didn’t have an involvement” with Mannatech, Carson replied to a question from CNBC moderator Carl Quintanilla.

“I did a couple speeches for them, I do speeches for other people,” Carson said. “They were paid speeches. It is absolutely absurd to say that I had any kind of relationship with them.”

Taylor was also approached by several media outlets asking about Carson’s link to Mannatech. “I don’t like being the center of attention,” he said. “I prefer being behind the camera.”

Taylor spoke to Breitbart News earlier this month in what the conservative website identified as an exclusive interview. Taylor told Breitbart that Carson was not compensated for his appearance. He also admitted that of some 300 audience members, “I would say that maybe about 10” were Mannatech distributors.

Taylor told Current he didn’t anticipate any controversy. On that January production day, he recalled, he and Carson were chatting. Taylor asked Carson if the rumors were true: Was he considering running for president?

“His answer was that he was not sure, and only if the people wanted him to,” Taylor said.

“My personal feeling overall was him running for president would be good for PBS and the show, and would cause many people to view and support their local public television station,” Taylor said. “My intention was pure and wanting everything to be the best for all parties.”

What Taylor didn’t foresee, he said, “was that many public television stations did not like his political slant and chose not to air the show” for that reason. He heard that from a few programmers himself. “I said, ‘What does that have to do with brain health? He’s a world-class brain surgeon.’”