ONA cited both as grand prize winners of support from its Challenge Fund for Innovation in Journalism Education, which over two years has provided grants of $35,000 each to 24 projects testing new approaches to teaching college journalism. The New Mexico News Port is one of several projects that collaborated with public media stations.

ONA announced the winners Sept. 24 during the opening session of its annual conference.

The largest prize — a $65,000 grant — goes to Georgia News Lab, a collaborative investigative journalism program involving five universities and two news organizations, the Atlanta Journal Constitution and WSB-TV, Atlanta’s ABC affiliate. Directed by David Armstrong at Georgia State University, the program “recruited for diversity and made sure that the students had access to the same resources,” Armstrong said during a conference session featuring presentations from seven Challenge Fund grantees.

Georgia News Lab’s students worked alongside experienced reporters on an investigative series and “turned up stories of how Fulton County squandered millions in federal HIV grants,” Armstrong said. The coverage prompted an investigation by a state ethics commission and the ouster of a county official.

New Mexico News Port, an online publishing platform for journalism students at the University of New Mexico, will receive $10,000 in grand prize money. Michael Marcotte, a former public radio news director and consultant who now is a professor of practice in UNM’s journalism program, supervises the News Port, which operates as an online news service and an “innovation space” for testing new approaches to news coverage.

Students in Marcotte’s intermediate and advanced reporting classes are required to produce coverage for the News Port as part of their coursework. They also produce video and audio segments for the university’s public television and radio stations. In the project’s first year, 75 students contributed reporting and seven faculty members participated in the project in some way, Marcotte said.

The launch of New Mexico News Port reflects an “acceleration of news thinking” within UNM’s journalism department, Marcotte said, which was the charge he took on in 2014 when he joined the faculty. Though students initially objected to the course requirements, “two-thirds of the way through, they were starting to persist and succeed,” Marcotte said. “At the end, they thanked us for challenging them.”

“Challenging these students is what they need,” Marcotte said.

The ONA session also featured presentations from Challenge Fund grantees at the CUNY Graduate School of Journalism, which collaborated with the New York Daily News in producing a three-part series on mold in public housing; Howard University in Washington, D.C., which is launching a fact-checking program to re-examine often-repeated stories about African-American communities; and West Virginia University, which is producing a sensor-journalism project on water quality in partnership with West Virginia Public Broadcasting and the Charleston Gazette. John Keefe, senior editor of the data news team at New York’s WNYC, is an advisor to West Virginia’s “Stream Lab.” 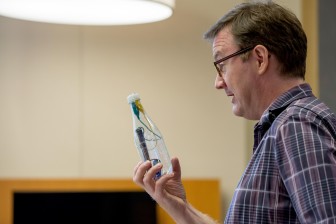 In an illustration of the experimental nature of the Challenge Fund projects, Keefe held up a sensor created to measure the water quality of the Monongahela River. “We’re using technology that didn’t exist until earlier this summer,” he said. The sensors are encased in plastic water bottles that the West Virginia students tied to concrete blocks and dropped into the river.

ONA partnered with the Excellence and Ethics in Journalism Foundation, the Robert R. McCormick Foundation, the John S. and James L. Knight Foundation, the Democracy Fund and the Rita Allen Foundation to launch the two-year, $1 million Challenge Fund program, which announced its second round of grantees in April.