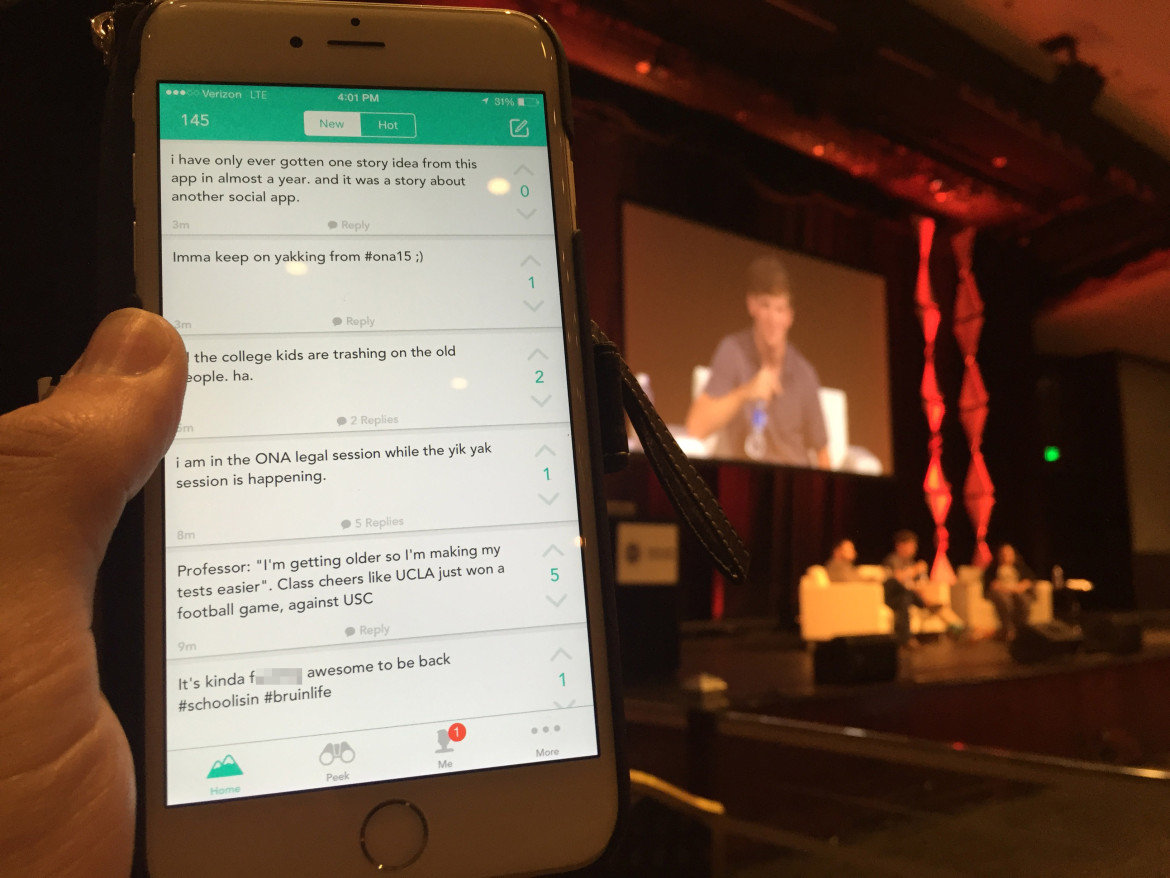 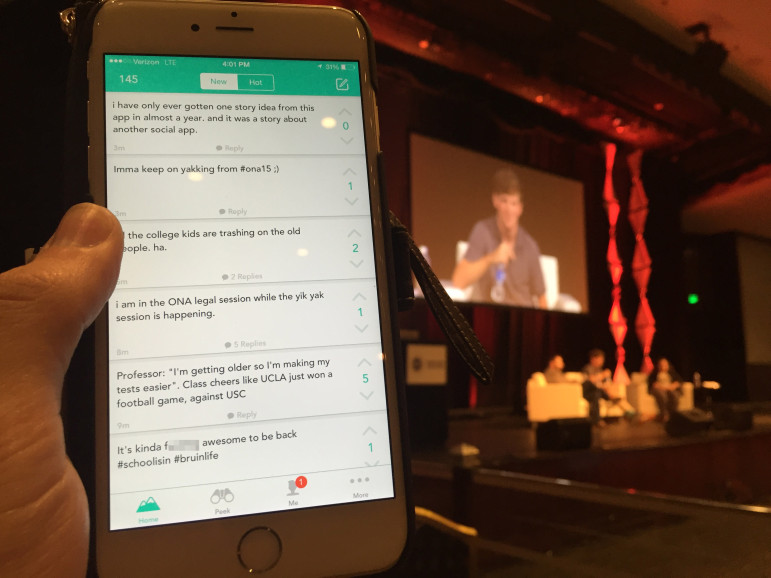 A lot of my students at Mercer University in Macon, Ga., use Yik Yak. If you’re blissfully unaware of Yik Yak, it’s a mobile social media app — most popular in the Southeast, where it originated — that organizes Twitter-like feeds of anonymous messages based on location. It’s perfect for seeing what other people on the same college campus are saying. I don’t think my students realize I look at it too.

I have described the experience of reading Mercer’s Yik Yak feed as gazing into the black, seething id of the student body. Posts tend to hit on one of three common themes: 1) I don’t like school; 2) I don’t like the cafeteria; 3) I wish someone would have intimate relations with me.

On its face, Yik Yak seems like an unlikely candidate for a collaboration on local coverage with the University of Florida’s Innovation News Center (which includes the university’s joint-licensee public broadcaster WUFT). But such a collaboration got under way in April, with reporters posting UF student–oriented news to the app.

Indeed, it has become an axiom of digital journalism that news organizations have to meet audiences where they are, and I would argue that public media orgs have a special obligation to do so. They are public service agencies, and you’ve got to bring the service to the people.

Imagine if the only way to get help from law enforcement was to go to a police station in a town an hour away that you never visit. That’s what public media is doing when it asks college students — many of whom don’t listen to the radio, or watch broadcast TV, or even use desktop websites or email much anymore — to tune in, or sign up for an email newsletter, or visit a website in order to have their information needs met.

So, if public media wants to serve college students better, it should think more about providing content — notice that I said “providing,” not “promoting,” content — in the places where college students actually are. College students in my part of the country, for better or worse (I’m gonna say worse), are on Yik Yak.

Based on their comments, here are some lessons that public media could learn from Yik Yak.

1) The popularity of Yik Yak itself proves that college students want to have a shared local experience and are hungry for local information, even if it doesn’t conform to traditional definitions of local news.

“I think people kind of got tired of how big things were getting,” Buffington said of his generation’s reaction to the globalization of information and commerce. “Ninety-nine percent of the news that concerns me is happening, you know, within a few mile radius of me.”

Even though college students can get strawberries from Mexico any day of the year (and they do), they like to get them in June from their local farmers’ market. Likewise, even though they can see what people from all over the world are up to on other social networks (and they do), they like to see what people who are within 1.5–5 miles from their location are saying on Yik Yak. (The precise geographic radius of your Yik Yak feed grows and shrinks within that range to keep it from being over- or underpopulated.)

2) There’s a lot of potential for public media to work in social apps that don’t require you to be followed to be seen.

If I’m a Mercer student and Georgia Public Broadcasting just isn’t on my radar, I’m not going to follow it on Twitter. That means I’m not going to see any of GPB’s tweets unless someone I’m following retweets them.

But if GPB’s Macon bureau were to post on Yik Yak, those posts would appear in the feeds of every Yik Yak user in the area (and the bureau is on campus). You don’t “follow” or “friend” people on Yik Yak, you simply see the posts of all the users around you. This offers a very rare opportunity for any organization to horn in on a conversation to which it hasn’t been invited.

But be aware: Any post on Yik Yak that gets five down votes from other users will disappear. So if you come to the party uninvited, you’d better bring something that other people actually want.

3) Don’t underestimate the ability of something like Yik Yak to disseminate important information.

For example, Buffington points to the November 2014 shooting incident at Florida State University’s library. “People out there found out about the shooting through Yik Yak nine minutes before their campus alert system alerted them,” he said.

Of course, one person’s vital news item is another person’s frivolous fluff. Hernandez said a news item that worked particularly well during her time with UF’s Yik Yak project was a message informing students that a popular fancy restaurant in Gainesville would be closed during graduation. It’s not life or death, but it’s definitely actionable information for the intended audience.

4) News orgs must always learn, and conform to, the vernacular of new media. 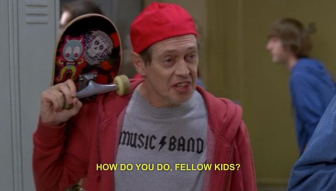 “We first approached [Yik Yak] with a voice that matched with the other products that we put out from the newsroom,” Sheehan said. “We operate the NPR, the PBS and the ESPN affiliates for north-central Florida, 19 counties there. That voice doesn’t resonate on a platform like Yik Yak.”

Instead, Hernandez said, short, informal messages about things of immediate interest to college students yielded the most engagement (as measured by up votes).

“‘The Taco Tuesday line is super short, you know, you might want to head there now,’” she gave as an example. “To a college student that’s, like, important news. You know, it’s not something we’re going to put on the 6 p.m. news for north-central Florida.”

Since everyone is anonymous on Yik Yak, there is no way for a new organization to control its brand. Sure, you can sign your messages with your identity so that your news org gets the credit, but what’s to stop a random prankster from doing the same with your brand?

Yik Yak originally addressed this problem for UF by giving the Innovation News Center its own “peek” section — a feed with limited posting privileges. Sheehan said they have since put that section (called “Swamp Juice”) on hiatus because users haven’t taken to that function in sufficient numbers.

The fact that the users themselves are also anonymous causes other problems that are familiar to any news org that allows anonymous commenting: an atrocious lack of basic human decency and restraint.

However, Buffington defended the anonymity of his platform.

The aim of not having a sign-up process was to lower the barrier to entry for anyone wanting to join the conversation, Buffington said. No doubt that low barrier explains much of the lack of decorum on Yik Yak.

But for us in the news business, we generally like it when users can easily access what we do. And boy, we definitely like it when people tell secrets.