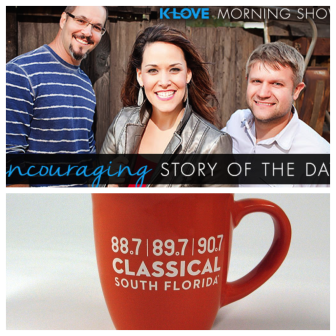 Religious broadcaster Educational Media Foundation, whose networks include K-Love, is purchasing the Classical South Florida network from APMG for $21.7 million.

American Public Media Group announced Tuesday that it sold its Classical South Florida network to a religious broadcaster because “efforts to build a sustainable classical music radio service in South Florida have not succeeded.”

The classical music service will move online to YourClassical.org, APMG said. Educational Media Foundation will begin airing Christian programming on the three-station network and one translator this week.

“We are proud of the classical music service we’ve provided to hundreds of thousands of South Floridians on FM radio,” said Jon McTaggart, c.e.o. of APMG, in a statement. “As audience expectations and needs have changed, along with changes in media technology and the music economy, it’s clear we must change the ways we deliver and sustain our services. We’ve been working to build Classical South Florida since 2007, and we’ve not succeeded in providing the distinctive value that motivates a sustainable level of support.”

APMG “had not been actively looking to sell its CSF stations,” according to the press release, but “received an unsolicited offer to purchase the CSF network.”

Current reported last week that APMG would sell the CSF stations for $21.7 million after spending nearly $30 million building the regional network over the past eight years. APMG bought Miami’s WKCP-FM for $20 million from Trinity International Foundation in 2007. It later added WPBI-FM in West Palm Beach, acquired in 2011 from Barry University for $4 million, and WNPS-FM in Fort Myers, bought for $4.3 million from Way Media in 2012.

Richard Rampell, a trustee on CSF’s board, said last week that EMF initially agreed to purchase the stations from APMG in May, without feedback from the Florida-based board. The initial offer to purchase came with a 24-hour deadline for a response and stipulated that APMG could not shop for a better deal. It also included a confidentiality clause.

In addition to silencing the classical broadcasts, the sale leaves the West Palm Beach area without public radio news and talk programming, which had aired on a WPBI translator.