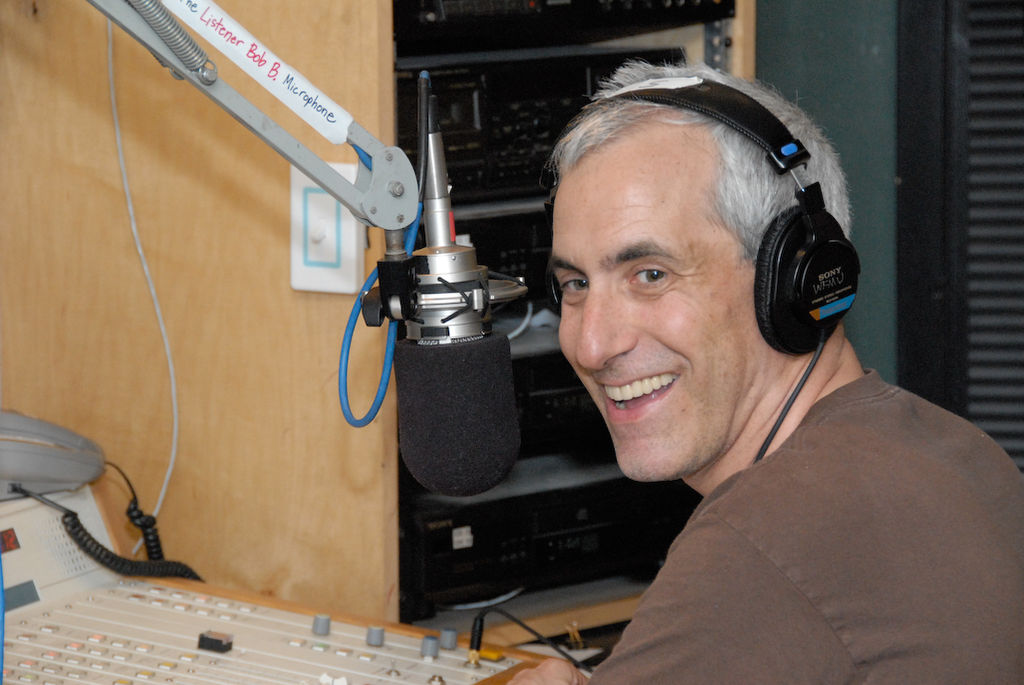 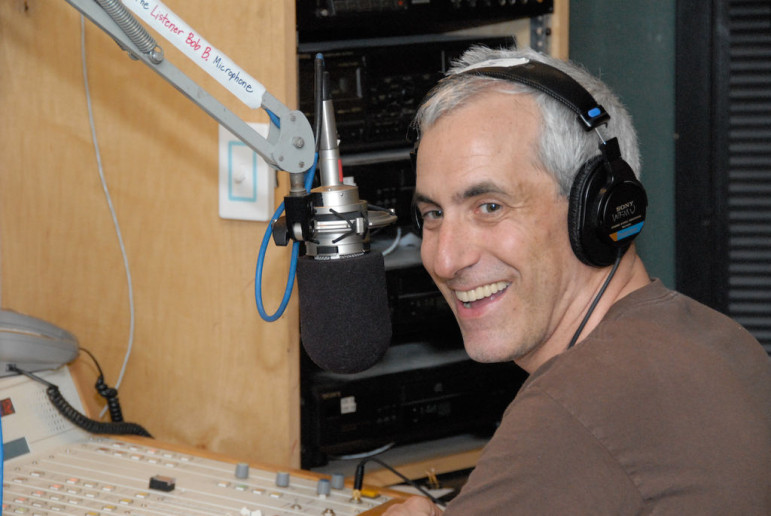 A public radio station whose livelihood has depended on fundraising and community-building is preparing to share its tools with the rest of public media.

“Nothing even remotely like [Audience Engine] does exist,” said Ken Devine, a longtime media executive and engineer who is advising WFMU on the project. “It’s meant to let publishers use content to build community and marshal communities’ enthusiasm and love to fundraise and become self-sustainable.”

With its wildly eclectic mix of all kinds of musical genres and often obscure selections, WFMU has developed a worldwide following. Simpsons creator Matt Groening is a fan, and the U.K. Daily Telegraph has called WFMU “possibly the world’s coolest radio station.”

The station brings in almost all of its $2 million annual budget from listener contributions, 70 percent of which are raised online. That’s the highest percentage of the overall budget for any public radio station in the United States, according to station manager Ken Freedman.

WFMU’s site boasts a robust online community in which users can donate to the station, “friend” each other, comment on threads alongside live-updating playlists, and mark songs, programs and show episodes as favorites. Every content creator should employ such engagement tools, Freedman said.

“I’ve received inquiries from college, community and commercial radio stations from around the world about how to utilize the software strategies we use at WFMU,” Freedman said. “I know there’s huge demand.”

But WFMU uses a proprietary CMS. So about five years ago the station began developing a free, scalable, open-source CMS focused on improving audience engagement and helping with digital fundraising. Their solution was Audience Engine.

“WFMU has an existing platform that is doing what Audience Engine is going to and starting to do,” Devine said. “The money comes in from a worldwide audience. This is not a theory. This is what they’ve done.”

Devine and Freedman think Audience Engine will appeal to small and medium-sized institutions, rather than larger organizations that have already invested millions of dollars into developing their own proprietary systems. They envision not just radio stations adopting the platform but news outlets, digital libraries, bands, filmmakers and other content creators.

“Everyone’s got the need to transition to a digital fundraising model,” Freedman said. “We think this is something that has to happen for [small] stations to survive. And we also see this as an issue for centers for nonprofit journalism that are key to keeping democracy alive as print dies off.”

To help stations fundraise, Audience Engine gives individual programs and hosts their own fundraising widgets and goals. Audiences can also create their own campaigns using their social networks, even embedding fundraising widgets on social media sites. Contributors are then rewarded with merchandise or community clout.

“The unique part of our system is the crowdfunding technology underneath and interactive technology that allows content producers to connect and fundraise with their fan base,” Freedman said. “We haven’t found that this exists.”

WFMU is developing Audience Engine with Bocoup, a developer of open-source web technologies that has collaborated with Google, Microsoft and Apple.

In particular, the Dodge Foundation sees Audience Engine as an important tool for local journalists, especially in New Jersey, where New York and Philadelphia outlets have traditionally dominated the news market.

“New Jersey has long suffered from not having enough local information,” said Molly de Aguiar, director of media and communications at the Dodge Foundation. “Audience Engine can serve smaller news sites that can’t afford the bells and whistles of something beyond WordPress.”

WFMU has been looking into relationships with nonprofit journalism centers, an effort helped by the involvement of Hamilton Fish, the former publisher of The Nation magazine and current publisher of The Washington Spectator. Devine said WFMU will be announcing key nonprofit adopters of Audience Engine in the coming months.

“[Fish] has begun to open a lot of doors for us,” Devine said. “A lot of problems these centers for nonprofit journalism are facing have already been met and solved in the public media realm. We see that as an important constituency, and [Fish] is well-suited to build bridges with those folks.”

Previous Dodge grants supported software development, but further funding would help with communications and marketing for Audience Engine, according to de Aguiar.

“They need to start attracting early adopters and get the word out about why this system is so important for publishers and media of all sizes,” de Aguiar said. “We want to start helping them do the storytelling about how [Audience Engine] is so unique and game changing for smaller publishers.”

In addition to seeking charitable grants, WFMU created a for-profit benefit corporation, Congera, that is raising private capital as investments in Audience Engine through a convertible note offering. The first closing of convertible debt will be next month.

The project’s first module, a crowdfunding app, is scheduled to launch within the next couple months. The crowdfunding widget is free, but organizations that lack IT staff to get it going can pay for implementation on their sites. Congera would then take a 3 percent cut of donations raised on sites using the app.

The launch will also bring an updated look to WFMU’s website, which is expected to be completed in the next two months, shortly before the crowdfunding module is implemented.

WFMU is in talks with potential early adopters of Audience Engine, including WWOZ, a public radio station in New Orleans. WFMU and two other New Jersey radio stations, WPRB and WSOU, plan to launch a prototype of the platform this year.

“People may love our content, but the way they’re interacting with content is going to change because the world is changing,” said Mark Maben, g.m. of WSOU, a college station that airs mainly rock music. “We see [Audience Engine] as a way to really broaden the connection we have with our listeners, with our audience, the people who care about the music we’re doing.”

WFMU was aiming to release the Audience Engine prototype last year, but obstacles in the coding process caused delays. “Software development at this level is extremely complicated, particularly when we’re working so hard to document and modularize the whole thing,” Devine said. “We’re trying to really do this as true open-source that’s incredibly well-documented so other groups can build their own templates and improvements on it.”

But for those involved with the project, getting Audience Engine right on the first try is more important than rushing to release an unpolished product.

“We live in a world where we want everything yesterday, but some things are worth the wait,” Maben said. “I think this is one of those things that will prove to be worth the wait.”

WFMU has spent about $500,000 on Audience Engine so far and will require $5 million over the first five years to become a self-sustaining business, according to Freedman. The station is optimistic about Audience Engine’s long-term financial viability. According to business projections, anticipated revenue will increase from just under $170,000 in fiscal year 2016 to over $34 million in FY2019.

Over half of that revenue, or about $17.8 million, would be generated by subscription fees paid by small organizations that can’t afford to host and operate Audience Engine themselves. Their fees would pay for Audience Engine hosting on Amazon through Congera. Fees from donations generated by Audience Engine would account for another $10.7 million.

Freedman worked closely with a business consultant on the projections, which he called “reality-based.” Devine added that the projections used a “conservative penetration number of stations.” WFMU projects that 2,500 publishers will be paying for Audience Engine hosting by the end of 2019, the first year that it would become profitable and self-sustaining.

Delays and high early costs will be well worth it for content creators if Audience Engine can make good on those encouraging projections, say Freedman and Devine.

“We think this is very doable,” Devine said. “It’s hard, but it’s doable. And it fills a need for helping media organizations of all flavors achieve sustainability.” 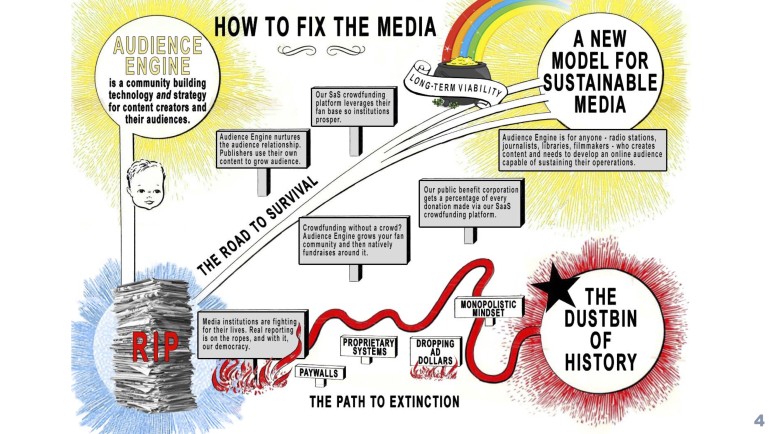 WFMU plans to “fix the media” with its Audience Engine platform (Photo: WFMU)