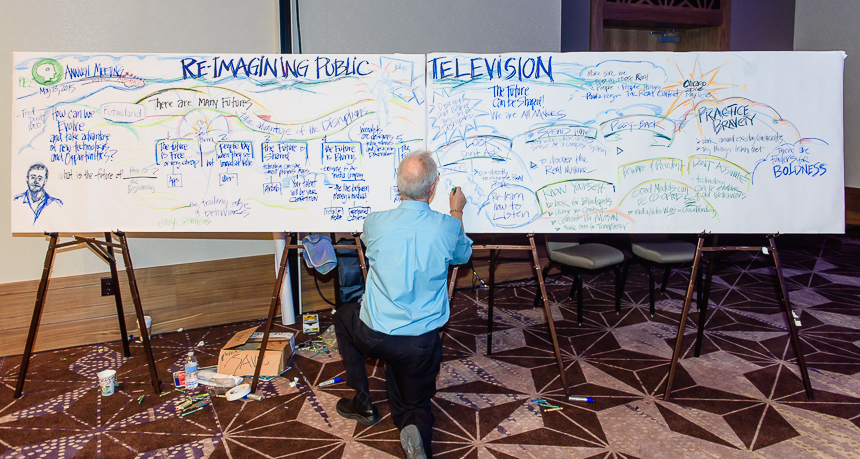 An artists works to capture the theme of a session at the PBS Annual Meeting in Austin, Texas. (Photo: John Pesina, PBS) 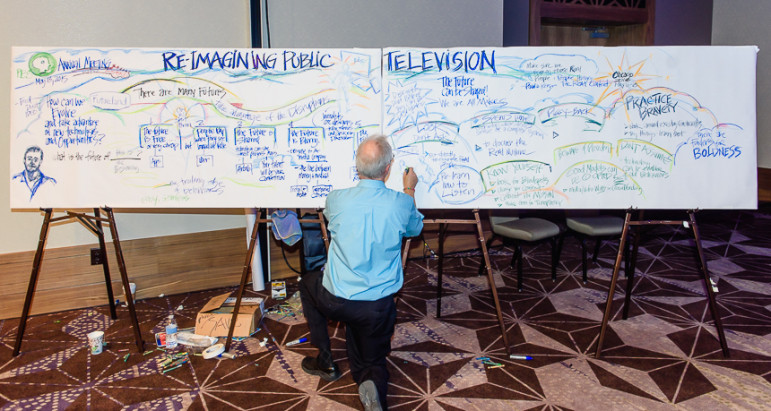 AUSTIN, Texas — PBS is reconsidering its place as an educational leader in a complex “new age of digital learning,” its top education executive told attendees at the PBS Annual Meeting here Wednesday.

The public broadcaster is “reimagining the very core of our educational value proposition,” said Alicia Levi, v.p. of education.

A “flood of educational content” from other providers, Levi said, challenges PBS to differentiate itself and its educational offerings, which are widely seen as vital to its public-service mission.

The kindergarten-through-college educational marketplace is fiercely competitive, Levi said. PBS faces “powerful incumbents who dominate sales to the classroom. The market is filling with venture-capital backed innovators to the tune of $640 million funneled into the ed-tech market last year.”

“We are examining foundational market questions and exploring our position in the space,” Levi said.

Increasing focus on teachers through the online classroom resource PBS LearningMedia “is a foundational opportunity,” she noted. More than 500,000 unique users visit the site each month, and educators are some of PBS’s “most loyal viewers, lovers of our brand and donors.”

A recent series of PBS webinars for teachers attracted 8,000 participants, “an impressive number by any standard if you consider that other organizations struggle to command a figure one-tenth as big,” Levi said.

“Our goal is not to fight our way into a fiercely competitive landscape by trying to be a direct force in the classroom,” she said, “but to become a trusted ally to teachers. We can and will influence those who instruct.”

Another request from stations for materials to better relate to Spanish-speaking viewers led to a toolkit for engaging Latino families, with promotional resources and bilingual outreach materials.

The annual meeting’s theme of “Reimagining Public Media” continued with updates on changes in news and public affairs programming.

“We’re tightening up the pacing, stepping up the production values, broadening the range of topics and narrative styles and experimenting and innovating online every day,” Just said.

For the 2016 election, the program “will go new directions,” collaborating with Frontline and public radio’s Marketplace on a “yearlong, multiplatform look at the economy through the lens of the election.” NewsHour is also talking with NPR about partnering on coverage, Just said.

Frontline also had a major announcement of its own. “I’ve stood up here in front of you many times over the years, but this is a special moment,” program creator David Fanning told the audience. “After 33 seasons, I’m stepping down as executive producer of Frontline.” 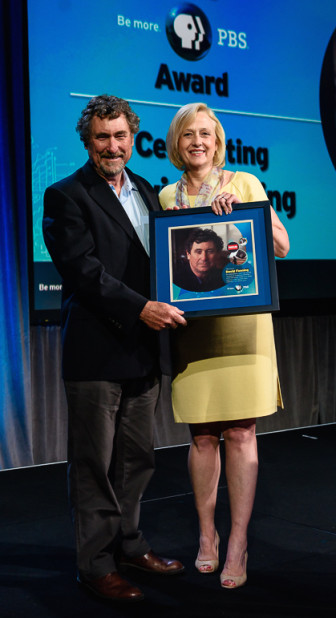 Fanning said he will “stay within the wider tent of public media” as executive producer at large for WGBH and Frontline. “This is my moment to get out of the business of fixing other people’s films and get back to making some of my own,” he said. Plans include creating content to complement the Frontline schedule as well as breakout special events.

“Meanwhile, I’m going to take a break this summer and do some thinking and some painting,” Fanning said. “I may even catch a fish or two.”

Taking over the acclaimed investigative news program is Raney Aronson, whom Fanning appointed as his deputy e.p. three years ago in anticipation of his retirement.

“My mission is to continue that legacy at Frontline, that intellectual DNA will always travel with us,” Aronson said. “That is my promise to all of you — that important and profound ideas matter. We’ll continue to tell tough investigative stories while extending our reach and our impact.”

In other news at the conference, which concluded Wednesday: