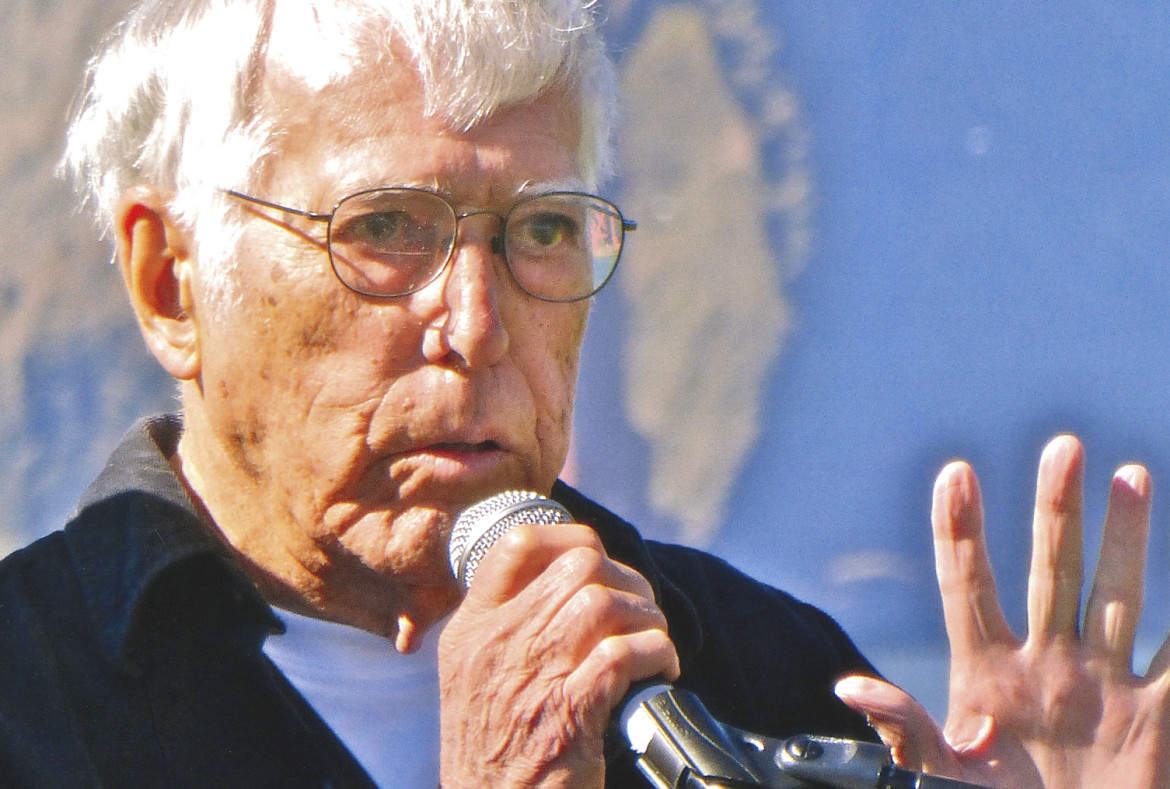 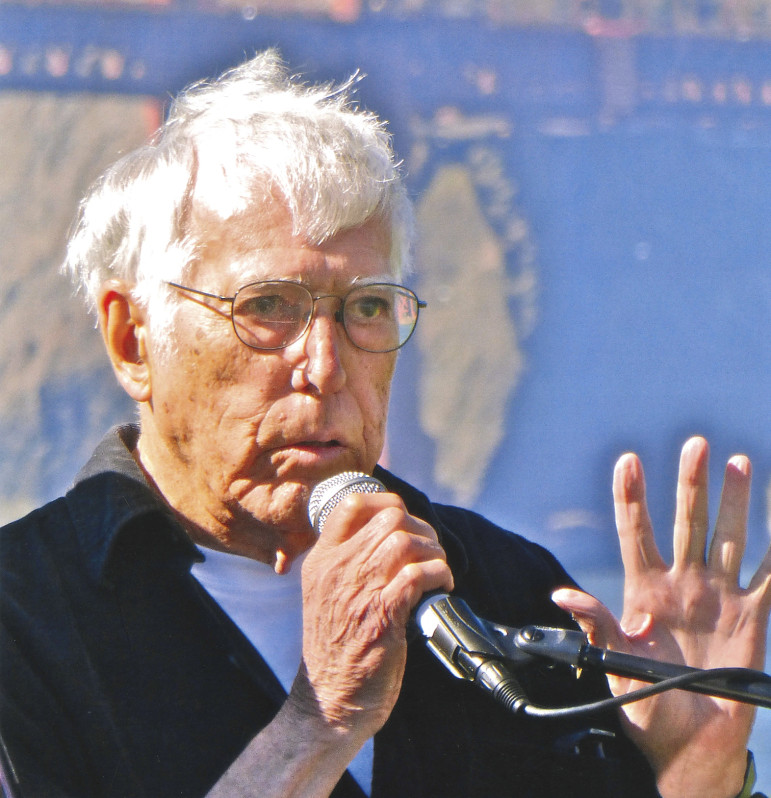 Moore recites one of his poems in May 2013 during a San Francisco Museum of Modern Art event at the Golden Gate National Recreation Area in San Francisco. (Photo: Phil Greene)

Richard Moore, an influential public broadcasting pioneer in California and Minnesota, died March 25 at his home in The Redwoods retirement community in Mill Valley, Calif. He was 95.

Although widely known as a veteran public broadcaster and respected filmmaker, Moore was also a poet. He died a week before publication of his final book of poetry, Particulars of Place.

Moore’s long and eclectic career began in 1949 when he cofounded KPFA-FM in Berkeley, Calif., with his future wife Eleanor McKinney and fellow pacifist Lewis Hill. KPFA was the first station in what became the Pacifica Radio network.

By 1954 Moore was hired as one of the original employees of KQED in San Francisco, where he began his tenure as membership director. He went on to become an accomplished television producer at the station, founding its documentary unit and eventually creating more than 110 films distributed by PBS’s predecessor, National Educational Television. Titles included an exploration of racism, Take This Hammer, with author and activist James Baldwin; Love You Madly, a profile of Duke Ellington; and Losing Just the Same, which chronicled life in an Oakland ghetto.

Moore also produced an outdoor ballet in the city’s Ghirardelli Square, Assemblage, choreographed by Merce Cunningham and set to a soundtrack of “the cackle of taxi radios” arranged by John Cage, according to a 1997 story in Current.

Catherine Allen, senior executive producer at Twin Cities Public Television, first met Moore at KQED’s documentary unit in 1969. “I was lucky to be the department secretary, gofer and just out of college,” Allen said in an email. “Dick’s projects were exciting, cutting edge, and eclectic. He was one of the first to make a cinéma vérité documentary about Cuba and Castro after the Revolution and I remember hanging around the editing room as he assembled scenes of Fidel playing baseball.”

He eventually succeeded James Day to become KQED’s second president — which surprised Allen. To her, Moore “had always seemed like the consummate artist and intellectual.”

“But obviously he was also someone with organizational and leadership skills,” she noted. “And more important, he could move easily from one world to the other.”

Moore left KQED in 1972 and formed an independent production company, PTV Inc., with Lawrence Grossman, later a PBS president. Moore focused on literary themes with his 1975 series The Writer in America, profiling such authors as Toni Morrison and Eudora Welty. 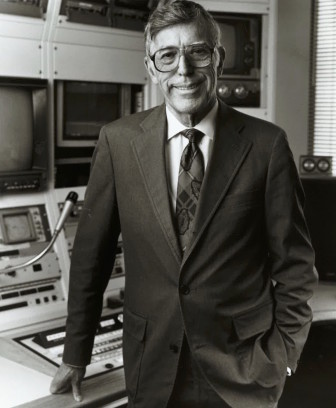 In 1981 Moore became head of national programming at KTCA, later Twin Cities Public Television. By 1983, he was TPT’s third g.m. The next year he began a campaign to fund new headquarters and studios in downtown St. Paul. Those facilities, which still house TPT, “were Dick’s lasting legacy,” said station President Jim Pagliarini in an email to staffers. Moore retired from TPT soon after the building was completed in 1989.

In the Current article, Moore reflected on public TV, program production and his tenure at all three stations. “There’s a big difference between breadth of vision and running a public television station,” he said. “KPFA, and to a lesser extent KQED, were simply a means of exercising one’s interest in many things, the arts and public affairs particularly. That’s a very different attitude from most managers who don’t think in programming terms, or are not qualified, frankly, not having the educational or intellectual background, to say nothing of the openness of mind or curiosity. Translating broad visions into programming was very much a presence at KPFA and KQED in its early days.”

Moore retired to northern California, where he continued to write and publish poetry. His work appeared in literary journals including Poetry, Volt, Redwood Coast Review and Amerarcana. He privately published several chapbooks including A Selection for Ruth (1997), China Diary (2012), Outcry (2014) and In Passing (2015).

He was born in 1920 in Ohio. By the early 1930s, his mother died of tuberculosis, and he was left in foster care in Los Angeles while his father looked for work during the Depression. He attended the University of California, Berkeley, in 1939 but was expelled for his participation in antiwar protests. He later completed his bachelor’s degree there.

He was a member of the original circle of avant-garde poets that came to be known as the San Francisco Renaissance. Moore was also a ballet dancer for several years.

Here is Moore’s poem “Lately Removed” from his last book, Particulars of Place. He wrote in an introduction to his collection of “Blindness Sonnets” that he had been “acutely aware” of his failing vision over the years but was “unprepared to face the emotional devastation” of a letter he received in the summer of 2013 confirming that he was legally blind.

Correction: An earlier version of this story had an incorrect location for KPFA-FM.