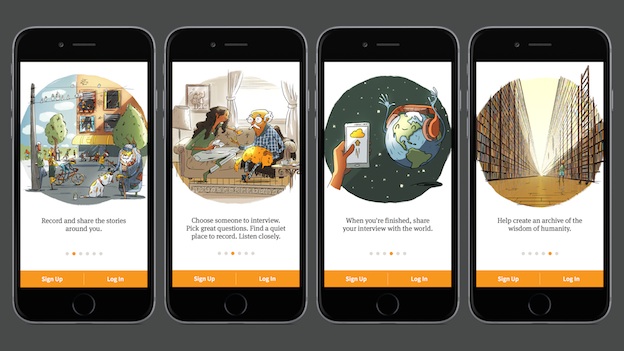 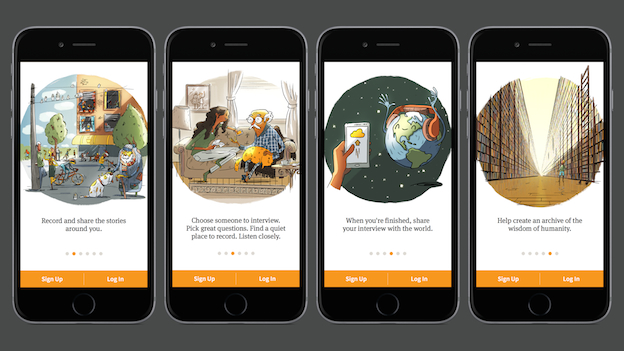 A new StoryCorps app released on Tuesday gives everyone with a smartphone the ability to record and share an interview.

Dave Isay, the founder and president of the nonprofit that collects interviews and personal stories of Americans from different backgrounds, unveiled the StoryCorps app March 17 at the TED Conference in Vancouver, B.C., where he spoke as the recipient of the 2015 TED Prize. The award, which provides $1 million to fulfill the recipient’s “wish,” was announced last November.

In an interview with Current, Isay described the app as “the biggest experiment since launching StoryCorps.”

StoryCorps launched in 2003 with its goal of providing people from all walks of life the opportunity to tell their stories; it has since archived more than 50,000 interviews with more than 100,000 participants. But “there is way more demand for our services than we can meet,” Isay said. Interviews are adapted for broadcast as weekly segments on NPR’s Morning Edition and as animated shorts presented on PBS by POV. A copy of every interview is archived at the U.S. Library of Congress’ American Folklife Center.

With the app, Isay hopes to expand the reach of StoryCorps, make the process of recording an interview accessible to more people and increase the number of stories recorded.

Isay described the app as “StoryCorps Lite.” Available for free download by iPhone and Android users, it is designed to work like a social network for sharing audio stories. Users can follow their friends and see when they post stories.

The app also helps users prepare for interviews with family members and close friends, providing tips for conducting an interview. Users who complete interviews can opt to share the audio with the U.S. Library of Congress, on the website StoryCorps.me and on social media sites such as Facebook and SoundCloud.

Isay invested all of his prize money in the app, but StoryCorps plans to raise at least $2.5 million more to hire staff to keep it going and build partnerships over the next three years. For example, Isay envisions a spin-off of StoryCorps’ National Day of Listening, promoted as an alternative to shopping each Friday after Thanksgiving. His “national homework assignment” would ask high school students to use the app to interview an older person in their family over Thanksgiving, capturing numerous stories in a single weekend.

“This has a chance to be a transformative moment for StoryCorps,” he said.

Since the TED Prize is presented annually to recognize an individual “with a creative, bold vision to spark global change,” Isay’s aspiration for the app is fitting.

To decide how to spend the $1 million prize, Isay said he gathered a small group of “very smart people who I trusted.” The idea for an app took “seconds” to take shape.

Actual development of the app wasn’t as easy, but it too had a relatively quick turnaround. Isay hired a team of developers from Maya, a firm based in Pittsburgh. “What we created in eight weeks usually takes a year and a half,” he said.

When asked if he worries that people will use the app to post inappropriate content that will live on in the Library of Congress, Isay said, “We have our fingers crossed that people will continue to treat this with respect.” App users do have the ability to flag content.

When StoryCorps first launched, “I was worried about Jerry Springer moments . . . and it never happened,” Isay said. Unlike what you might read on online comment sections, “People are basically good and decent and kind,” he said.

Unlike the original conception of StoryCorps, which provides recording booths and professional equipment to participants, interviews from the app will not be considered for broadcast.

“I guess anything’s possible, but it’s very improbable,” he said.

When producing a segment for NPR, StoryCorps can pick only three minutes out of every 200-300 interviews recorded in its booths, according to Isay.