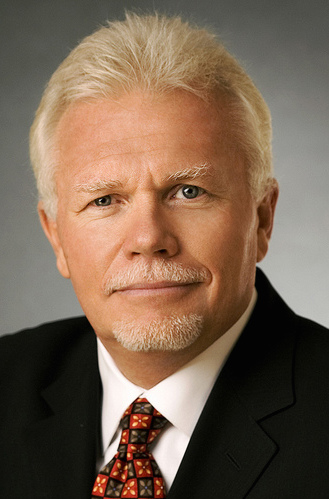 Rogers, only the second president in PBS SoCal’s history, has held the job for 18 years. Among his accomplishments was expanding the station’s broadcast reach throughout the Los Angeles market in 2003. The next year, he directed the KOCE-TV Foundation’s effort to purchase the station’s broadcast license from its previous owner, the Coast Community College District.

Russell arrived at the station two years ago after 20 years in public broadcasting. Most recently he had served as s.v.p. for strategy and research at PBS and s.v.p. of media at CPB. During his career he shaped PBS’s primetime strategy and helped create Ready to Learn for preschool children.

“When I hired Andy to join PBS SoCaL as c.o.o., I did so with the intention of putting in place a likely succession plan for the station,” Rogers said in a Feb. 5 statement.

Todd Mundt starts work March 16 in Seattle as KUOW’s managing producer, a new position. He will oversee producers and hosts creating content for KUOW’s continuous block of newsmagazine programming airing from 5 a.m. to 7 p.m. Most recently, Mundt managed content at Louisville Public Media, where he had previously served as v.p. and chief content officer as well as program director of WFPL News in Louisville. He also worked as editorial director for NPR Digital Services.

The new general manager of WNKU-FM, the Triple A public radio station in Highland Heights, Ky., is Sean O’Mealy. He has been in radio since 1989, most recently managing three Shamrock Communications stations in Scranton, Pa. Valerie Abbott, interim g.m., said in a Feb. 9 statement that O’Mealy’s commercial Triple A background “means he’ll bring a fresh perspective to a public radio model that has, by and large, been driven by the more traditional NPR news formats.”

American Public Media Group in St. Paul, Minn., has selected Vikram Bhagat as senior counsel. He is responsible for negotiating and drafting production agreements, administering guild agreements, and providing advice and counsel to business units across APMG regarding talent, production, licensing and nonprofit business activities. Bhagat most recently served as corporate counsel for The Associated Press in Washington, D.C.