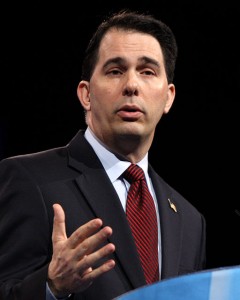 Wisconsin Public Radio and Wisconsin Public Television face a reduction in state funding under a new budget put forward by Gov. Scott Walker, raising questions about the possible impact on their services.

Walker, in his second term as governor, is eyeing candidacy in the 2016 presidential election. His proposed budget, released last week, includes a 34 percent reduction in direct funding to Wisconsin Public Radio and Wisconsin Public Television.

“This was clearly directed at public radio and public television,” said James Steinbach, director of television at Wisconsin Public Television.

Both organizations are funded by the Educational Communications Board, an independent state agency, as well as through the University of Wisconsin system and friends’ groups. The ECB has a total budget of around $19 million, providing nearly 40 percent of the pubcasters’ total budget.

“We don’t know what the likelihood is the budget will pass in its current form,” said Gene Purcell, ECB executive director. “But it’s likely enough that we have to take it seriously.”

“It was a complete surprise,” Steinbach said. “We, to put it bluntly, expected to do our part with state cuts of like 10 or 15 percent. But we did not expect it to be 34 percent.”

The proposed budget calls on pubcasters to make up the state funding shortfall by increasing membership revenue. “We estimate that the ECB will be able to make up the difference in program revenue through grants, gifts and private donations,” Walker spokeswoman Laurel Patrick told the Wisconsin State Journal.

Given that the budget is expected to be implemented July 1, the broadcasters have little time to cover the shortfall, Purcell said.

“The governor is saying they can take that away and listeners will make it up,” Purcell said. “But it’s an awfully big increase to make up in a short amount of time. This is a very serious issue for us.”

“University funding as a whole has been targeted in this budget,” Purcell said. “How that effects public broadcasting is unknown. It’s hard to know what those cuts will look like once they trickle down.”

Purcell could not yet predict how reductions would trickle down to the broadcasters or what cuts would have to be made to personnel or programming if the budget passes. Wisconsin Public Radio, which turns 100 in 2017, has 34 stations across the state and three nationally syndicated shows: Michael Feldman’s Whad’ Ya Know?, To The Best Of Our Knowledge and Zorba Paster On Your Health.

The 60-year old Wisconsin Public Television has six stations throughout the state and a regional news program, Here and Now. WPT also airs locally themed series such as Around the Farm Table, Wisconsin Hometown Stories and Wisconsin Life.

The broadcasters have started contacting legislators to make their case as the proposed budget makes its way through legislative committees and toward a vote, Purcell said. He said the ECB and the university system would also begin determining priorities for WPT and WPR as the July deadline approaches.

“We have a long way to go and a hard road ahead of us,” Purcell said. “But we are a part of the fabric of Wisconsin and we have a great story to tell, and I’m optimistic we’ll be able to get some of this back.”