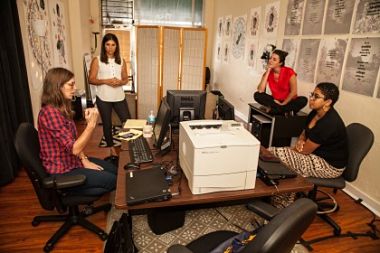 One of the hottest real estate markets in the U.S. is the northeast Los Angeles neighborhood of Highland Park, a community that had been largely populated by working-class Hispanics until rapid rising property values began reshaping the demographic makeup of its 60,000 residents.

Marketplace recently turned its focus on the economic forces and societal changes that have made Highland Park a case study in gentrification. Property values have increased more than 200 percent since 2001, according to RealtyTrac. The reporting series explored how working-class families, artists and small-business owners who live there are increasingly being displaced by real estate investors, wealthier homeowners and new lifestyle-oriented businesses such as yoga studios, coffee shops and a vegan bakery. One family the team spoke with had bought a house in the neighborhood in 1978 for $78,000, and sold it for $520,000 in 2014.

The coverage aired during the first week of December as a special package of radio stories and a multimedia website exploring the mechanics and impact of gentrification on the neighborhood. Audience reactions were so strong that Marketplace’s producers plan to develop more reporting on gentrification and to adapt this approach for other subjects.

To produce the series, the desk’s four members — reporters Krissy Clark and Noel King, and producers Lindsay Thomas and Caitlin Esch — moved into a temporary news bureau on one of the neighborhood’s major intersections, reporting from the community over a two-month period. The results were boiled down to a week’s worth of stories for American Public Media’s flagship news series, which is based in Los Angeles, as well as the BBC NewsHour.

The decision to embed the reporting team in the “pop-up bureau” stemmed from a goal to immerse journalists on the desk in a community where the many different facets of economic and demographic change are part of everyday life. By working in Highland Park, the reporters and producers gained a broader, deeper perspective on what it means when a neighborhood goes upscale.

“The idea of being able to go deep and follow stories wherever they go is not something we normally have the luxury of doing,” said Marketplace Executive Producer Deborah Clark. “But the team was able to use the time to create some innovative storytelling that was really fantastic.”

In addition to feature stories on how long-term and new residents view gentrification of the community, the series included reporting on the business players who are shaping the change. King and Krissy Clark interviewed real estate brokers and property management representatives, bringing to air candid discussions about how money is made transitioning a neighborhood from middle to upper class.

“As reporters, we all have the fantasy that we can do a really deep dive into a story,” King said. “And it was all true, being able to spend such a long period of time immersed in the neighborhood elicited these kinds of stories.”

The whole project took nearly a year to plan and produce. The team on the Wealth & Poverty Desk began discussing topics for a major reporting series in early 2014.

“We always said we wanted to work on a project where all of us were involved,” King said. When the topic of gentrification was proposed, “It was something we could all identify with. People like to talk about it, and they have strong opinions about it.”

From there, discussions about which communities to cover quickly turned to Highland Park. Both Clark and Esch, a producer on the desk, live in the neighborhood and saw it as a good example of gentrification at work. After further discussion, the team agreed to focus the entire package on the L.A. neighborhood.

“We batted around a bunch of neighborhoods, but once we settled on Highland Park we liked it for a number of reasons,” King said. “And there’s a kind of classic gentrification model in place in Highland Park.”

The pop-up bureau was located in a retail space on Figueroa Boulevard, one of two main streets in Highland Park that inspired the series’ title, “York & Fig: At the Intersection of Change.”

The team relocated to the office last July and spent the first month canvassing the neighborhood, knocking on doors and introducing themselves to residents and businesspeople of Highland Park. They began producing stories in August and September, King said.

They tried to open the bureau up as a community space by displaying artwork from local artists and convening meetings to discuss the future of Highland Park. They also hired a local photographer to shoot still photos for the project’s website and partnered with nearby Occidental College to secure old maps and photos of the neighborhood.

When Marketplace’s pop-up bureau was tagged with graffiti, members of the reporting team realized that they had become part of the story they were covering. (Photo: Marketplace)

About six weeks into Marketplace’s residency, the bureau became part of the story. Graffiti scrawled in yellow paint on the bureau’s front door marked the office as “Gentrifiers!” Another newcomer business in the neighborhood was also tagged. A story about the graffiti became the lead report in the story package.

The entire series comprised five daily audio stories aired by Marketplace, accompanied by a standalone website, Yorkandfig.com, that expanded on the radio coverage with multimedia components, including a map of the neighborhood and charts showing census and demographic data as well as additional audio and video interviews.

The team also used Twitter, Facebook and Instagram to start a social media dialogue about gentrification in Highland Park and other communities across the U.S. The responses from listeners and followers provided a wealth of ideas about where to go next with the coverage, according to Clark and King.

“We thought the end would be the Friday we wrapped up the stories,” King said. “But we keep getting responses and people telling us stories about gentrification in their areas.”

“It got phenomenal reactions from people,” Clark said. “It wasn’t just emails saying they liked it as much as it was people telling stories about their own experiences. I think we really struck a nerve.” Given the reaction, she’s looking to develop follow-up reports on gentrification.

A grant from the Ford Foundation supports reporting produced by the three-year old Wealth & Poverty Desk and covered the costs of the York & Fig project. Marketplace was planning to tackle other subjects with a similar deep dive, Clark said, but now she is reevaluating how to build on the success of this new approach.

“I’m looking at, is there a way to do this but on an even bigger scale,” Clark said. “Not scaling back, but taking it forward and making it bigger.”