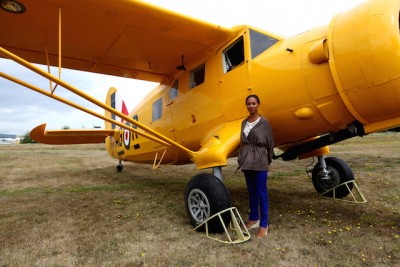 History Detectives: Special Investigations researcher Kaiama Glover poses in front of a Norseman bush plane, the same kind that bandleader Glenn Miller boarded before his disappearance in 1944. HD:SI probed that mystery and others in its last season. (Photo: OPB)

Production has ended for History Detectives: Special Investigations, the latest incarnation of the 11-year-old public television show that features a team of sleuths tackling unsolved mysteries.

The program, produced by Oregon Public Broadcasting with partner Lion TV, had dwindled from 11 episodes per summer run to just four last season. It was also revamped last year in an attempt to goose sagging ratings as it competed with many similar programs such as Pawn Stars popping up on commercial television.

The revamp did boost viewership, according to Executive Producer David Davis, television v.p. at OPB. The new HD:SI, as it was dubbed, had a smaller on-air team, a new investigator and deep explorations of cold cases in history instead of objects submitted by viewers.

But the ratings boost wasn’t substantial. According to TRAC Media, the original History Detectives was scoring a .97 rating in the 2011-12 season before it went on hiatus for the format change; last summer, when it returned as HD:SI, that inched up to 1.11.

PBS was the sole underwriter during the show’s entire run. “In the absence of support from underwriters or co-producers, PBS decided not to commission more episodes of History Detectives at this time,” PBS spokesperson Jan McNamara said in a prepared statement.

The lack of outside funding was an ongoing issue, Davis said. In addition to production costs, the budget paid for a website, promotion and marketing. “We always prided ourselves at being at the low end of what a PBS hour costs,” he said, “but if there’s only one funder, that makes it pretty expensive on a per-hour basis. Most shows have other funding sources.”

PBS doesn’t publicly discuss its production contracts, and McNamara declined to say whether PBS is the sole funder of any other programs.

The Oregon station searched for sponsors for History Detectives throughout its run, as did PBS. “And over the years we had other organizations try as well,” Davis said. “I have no idea why we never found an underwriter, as the show was popular.” Despite its modest ratings, the program had an enthusiastic fan base, with nearly 137,000 Facebook fans. When one of the show’s researchers, Wes Cowan, announced on that page Jan. 7 the end of the show, nearly 2,000 people commented to register their dismay.

The program remains so popular, in fact, that OPB still receives five or six emails from viewers each day — even after the format change and producers posting on the show’s website that investigations had ended. “We respond to each one, and that takes a lot of staff time,” Davis said. Despite the announcement on Facebook that production has shut down, the emails keep coming.

Davis would like to approach potential funders, but now “it’s a difficult chicken-and-egg problem,” with no future episodes. McNamara said that “the door is open” to PBS commissioning more episodes if an underwriter does step forward.

Steve Bass, OPB president, sees the show’s ending as emblematic of the general falloff in public television national production at many stations. He said the system had “probably 12 or 14 national producing stations” when he was director of development and national corporate support at PBS from 1982-91; most are no longer involved.

“Over the last 15 years, national production has also become a smaller focus at OPB,” he said. “In the late 1990s, it was half our annual budget. Now, maybe 15 percent. I worry about public television’s domestic capacity to create content.”

The station’s national production department also creates educational media for classrooms and professional development content for teachers, for clients including the National Science Foundation and the U.S. Department of Education, Davis said.