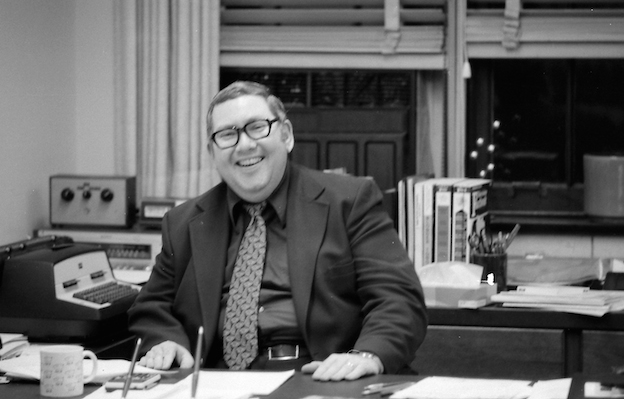 Mullally began his career in public media in 1973, at WILL in Urbana, Ill., and retired from there in 2005. (Photo: Jack Brighton)

Donald Mullally, a former general manager at WILL in Urbana, Ill., and former chair of the NPR Board credited with helping navigate NPR through a financial crisis in 1983, died Jan. 20 at his home. He was 77.

Mullally began his career in public media in 1973, when WILL-AM/FM/TV in Urbana, Ill., tapped Mullally to be the station’s director of broadcasting and g.m. He continued in that position until he retired from the station in 2005. Previously, in 1969, he accepted a teaching position in the department of radio and television at the University of Illinois’ College of Communications, after completing a doctorate in mass communications at Michigan State University.

“Don’s passing is truly a loss not just for WILL, but for public media,” said Jack Brighton, director of new media and innovation at WILL. “He was a key leader among the generation of public broadcasters who transformed the loose federation of educational radio and television stations into the professional network of NPR and PBS affiliates and strong national program services that we know today.”

In 1983, Mullally led NPR out of a major financial crisis when he was appointed as chair of NPR’s board of directors. President Frank Mankiewicz and other top managers were toppled and some 60 staffers laid off. NPR, then largely dependent on federal aid through CPB, had expanded activities to generate nonfederal money, but those efforts contributed to NPR’s near-collapse. The U.S. Government Accounting Office found that revenues lagged behind budget, expenditures exceeded budget and management lacked systems to monitor the situation, resulting in a $6.4 million deficit in fiscal year 1983.

According to a story on WILL:

In one of his first acts as board chair, Mullally recruited Ron Bornstein to serve as NPR’s acting president. Bornstein says he only took the job because of Mullally; He knew he was walking into a dire situation.

“We had to borrow reporter’s notebooks from CBS across the street because we couldn’t afford them,” Bornstein remembered.

Patty Wente, president of the Wente Group nonprofit consulting firm and a friend of Mullally’s, described him as a “man of few words, but when he spoke you listened.” She also described him as a “peacemaker,” which was important during his time on the NPR Board.

“Don came in as kind of the Henry Kissinger of his day and melded the public radio groups together,” Wente said.

“Mullally’s early vision for a symbiotic relationship between NPR and its member stations remains a pivotal turning point for the nonprofit media organization,” NPR said in a statement.