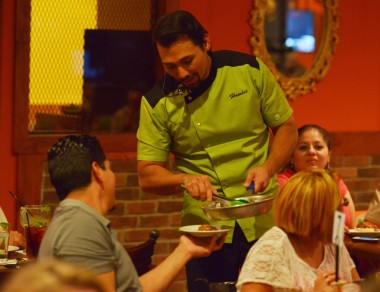 When Vme brought star chef Hamlet Garcia to San Antonio this summer for a dinner hosted by KLRN, some 200 fans turned out. (Photo: Vme)

Vme TV, the Spanish-language multichannel for public broadcasters, is in the midst of a complete revamp aimed at cultivating more underwriting support for a program lineup focused on lifestyle programming.

Over the past year, a new group of investors has poured more than $1 million into the restructuring, which has provided for more acquisitions and production of original series.

Victor Cerda, Vme’s s.v.p. of corporate strategy, sees promising potential for Vme to thrive. Hispanics are a growing TV audience, he said, and sponsors will soon realize that Spanish-language broadcasting consists of more than cheesy telenovelas, the short-run soap operas that are popular on the other two major commercial Hispanic networks, Telemundo and Univision.

So far, Cerda said, Spanish-language media “aren’t touching” quality, informative lifestyle content. Most of the currently available programming, he said, “is like junk food. And if you eat the same stuff over and over, it may not be good for you.”

The difference between Vme and the two commercial Spanish broadcasters “is very stark, just like the distinction between PBS and commercial TV,” he said. Corporate sponsors “can associate their brands with telenovelas, or with Vme content and its good image for the community.”

Vme is one of three multicast channels packaged for public TV. The others, Create and World, are distributed by American Public Television. National ratings for all three services are up an average of 18 percent over the past four seasons, according to Craig Reed, audience analyst for TRAC Media. The ratings data is compiled from a small sample of stations that subscribe to Nielsen data for their subchannels, he said, but it does indicate that the PTV’s multicast viewership is growing.

According to Rentrak, a media measurement service, Vme ranks 19th in viewership among 34 Spanish-language networks and 16th in primetime, up from 20th in 2010.

The group of Florida-based Venezuelan investors that took over a controlling interest in Vme, a for-profit public-private partnership, in April 2013 sees potential to expand on that growth. Previous owners — investment firm Baeza Group, venture capitalist Syncom Funds and Grupo PRISA, a Spanish- and Portuguese-language media company — remain on the board as minority partners, as does WNET in New York. Leading Vme is President Eligio Cedeño, a banker who is also backing Canadian Hispanic TV network Nuevo Mundo Television.

The Venezuelan majority shareholders make Vme the only Hispanic-owned and -operated Spanish-language network in the country, Cerda notes. Telemundo is owned by NBCUniversal, and Univision by a group of U.S. equity investors.

Last month Vme unveiled a long-term programming partnership with BRB Internacional — an international production, distribution and licensing firm — that starts with five animated series for preschoolers to air either on Vme Kids with ads or during Vme Niños, the noncommercial morning preschool block on the main channel.

Over the past year, Vme has focused on “getting costs aligned with revenue and investment,” Cerda said. It relocated headquarters from New York to Miami and purchased a dubbing company to save money on translating content. It also established an advisory council featuring high-profile names in business, entertainment, broadcasting and education to provide insight on issues of interest to Hispanics.

When the sale to the Venezuelan investors was announced last year, investor and media executive Eduardo Hauser told a Hispanic business website that he hoped the infusion of cash would transition the privately held Vme from “a financially strapped company to one that is properly capitalized.” Hauser is a former member of the NPR board.

Vme is also “a lot more educational” than Univision or Telemundo, said Federico Subervi, a researcher and scholar on Latino media and audiences at Kent State University in Ohio. He pointed to a $24 million fine that Univision paid in 2007 for not meeting the FCC’s minimum standard of airing three hours of educational children’s programming per week. In its defense, the network insisted that a telenovela following twin 11-year-olds switched at birth qualified as educational. Univision now carries commercial kids’ programs, such as Mickey Mouse Clubhouse.

But Vme isn’t the only educational Spanish-language network, Subervi noted. The Hispanic Information and Telecommunications Network, launched in 1983 as a private, nonprofit organization, is distributed to some 40 million households on several satellite and cable networks. It received a $30 million Ready To Learn grant from the U.S Department of Education in 2010, the last round awarding federal funds for educational children’s content.

Vme is funded entirely on private investment money and earned revenues, and the latest infusion of cash backs a program strategy reflecting PTV’s values, Cerda said. It is building on pillars that reflect PBS content — lifestyle, cooking, education, nutrition and health — and can be supported through sponsorships.

“All those issues are important to Latinos,” Cerda said. “Like nutrition — you just don’t see that covered on other Spanish networks. But health has always been a challenge in this community, so we can push that message.”

One of the first major underwriters to buy in to the new approach is Better Homes and Gardens Real Estate, which sponsored 15 short “Vme Hogar” (“Vme Home”) segments. The three-minute interstitials, now on air and online, feature hosts that Vme recruited through its partnership with Casa Latina, a home-improvement website and annual expo targeting Hispanics. The short videos address topics such as storage ideas, creating space for exercise, organizing a laundry room, tips for selling a house and working with contractors.

Hispanic homeowners are an underserved audience and an important target, Cerda said. The National Association of Hispanic Real Estate Professionals has projected that half of all new homebuyers in 2020 will be Hispanic.

Garcia is becoming a bit of a Vme celebrity. When he appeared at an August special event hosted by KLRN in San Antonio, a crowd of some 200 turned out, said Katrina Kehoe, station spokesperson. Attendees chatted with the chef and nibbled on a six-course dinner he prepared, including tropical shrimp ceviche, tequila lemon and rosewater sorbet, pabellón criollo (a shredded beef dish) and caramel flan.

Vme “paid for his travel, took care of a lot of the logistics — they basically made it possible for him to be there,” Kehoe said.

KLRN — serving a population that’s more than 50 percent Hispanic — has carried Vme since its launch and has collaborated on special programming, such as Spanish-language coverage of the city’s annual fiesta parades.

“I think they’ve nailed it, being the quality Spanish-language station,” Kehoe said. “They’ve got a great product. And people appreciate it.” Although KLRN doesn’t get ratings information from Nielsen, “when we’re out in the community, people often mention Vme.”

‘Something the country needs’

Acquiring quality Spanish-language content can be expensive, Cerda said. Most programming produced in Mexico and South America doesn’t meet Vme’s standards. “We end up buying from Europe, like the BBC, or from PBS, and then dubbing it.”

In the past, Vme budgeted “in the seven figures” annually to cover the costs of translations and dubbing, he said. Last year it purchased Sonoclips, a dubbing business based in Caracas, Venezuela, and brought the work in-house. “That has allowed us to save a lot of money,” he said.

Maryland Public Television is using the dubbing service for two of its shows, said Steven Schupak, c.o.o. at the state network based in Owings Mills.

Motor Week, its nationally distributed automotive series, is one of them. Several years ago, the show’s underwriters began asking MPT about reaching a national Hispanic audience, Schupak said. MPT, which carried Vme on multicast since its launch, worked out a deal to adapt Motor Week for Spanish-language viewers and distribute it on Vme.

The University of Maryland agreed to use language students, supervised by experts, to dub 52 episodes for about $100,000, Schupak said. “But about a year into it, we were getting comments about the quality of the translation. Some students didn’t have experience in translating the automotive genre.” One episode noted that a car was “edgy,” which ended up translated as “nervous.”

So Vme took on the task, he said, which has worked well. MPT is also exploring licensing the program in Spanish internationally through Vme. “We’re excited about that,” Schupak said. “They have those relationships, and we’re interested to see if this can generate revenue. We’ve proposed a revenue split.”

MPT’s Space Racers, an animated kids’ show produced with input from NASA, is also running on Vme. It translated 26 Space Racers episodes (in Spanish, Exploradores Espaciales) and added the program to its weekday-morning children’s block in July.

This fall, Moreno taped a public service announcement to get out the vote for November’s midterm elections in association with the U.S. Election Assistance Commission. In conjunction with the White House Initiative on Educational Excellence for Hispanics, Vme has also produced PSAs to encourage Latino students to become teachers.

So far, all the work over the past year has pleased investors, Cerda added. “They’re seeing a good direction,” he said. “We’re working long hours to accomplish all this, but it’s something that the country needs.”