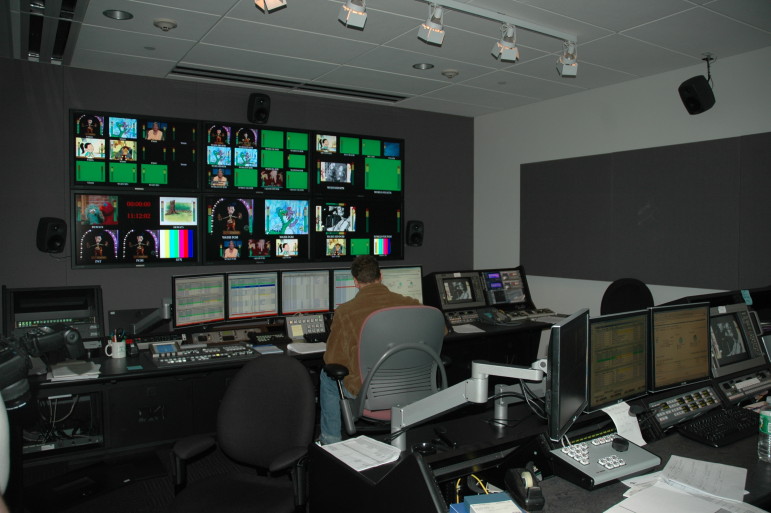 Boston’s WGBH and WGBX share a master control room, but the future of the broadcaster’s second license is in doubt with changes in technology coming. (Photo: Scott Fybush)

Broadcast TV in the U.S. will undergo two big changes in the next few years, and a clash in the timeline for those shifts promises big headaches for pubTV stations.

In an ideal world, the transformation would take place in a single step. When stations are repacked to new channels as part of the FCC’s spectrum auction, they’d also switch from today’s ATSC 1.0 system to the new ATSC 3.0 system.

In reality, the next steps for pubTV stations and their commercial colleagues are likely to be much more complicated, and potentially much more expensive as well.

ATSC 3.0 promises more efficient use of broadcast spectrum, greater interactivity, ultra–high-definition video and better compatibility with mobile devices. But the broadcasters, equipment makers and consumer electronics companies that make up the Advanced Television System Committee are working their way through a deliberate process that won’t even deliver a “candidate standard” for ATSC 3.0 until 2016.

Add the time the FCC will take deciding whether to turn the finished standard into an official set of regulations, and it’s likely to be 2017 or later before broadcasters know when, how and even if ATSC 3.0 will become an urgent priority.

Long before that process is complete, though, the FCC hopes to move forward on the more immediate piece of broadcast TV’s future. By 2016, TV stations will have to decide whether to put all or part of their 6 MHz chunks of RF (radio frequency) spectrum into an incentive auction that’s expected to yield billions of dollars in revenue from transferring some of today’s UHF TV spectrum to wireless carriers.

Even for stations that don’t offer spectrum at auction, the process will include a shift (“repacking”) of existing channel assignments to clear the upper end of the UHF spectrum around the country. But those stations will make those changes in the existing world of ATSC 1.0 while waiting for ATSC 3.0 to become a reality.

While the FCC has delayed the spectrum auction and repacking several times, few in the engineering community expect that process to remain on hold long enough for development of ATSC 3.0 to catch up.

“At a certain point, [the FCC] needs to pull the trigger,” says Alan Popkin, director of TV engineering at KLCS in Los Angeles. “They have a clock ticking, and they have a mandate to do it.”

That puts pubcasters in a tough position. Many will need to budget for new antennas and possibly new transmitters to move their existing services to new channels during the repack in a year or two, only to become obsolete within a few years when and if ATSC 3.0 replaces the current ATSC 1.0 standard. (ATSC 2.0, an improved interactive standard nearing its final form, will not require significant updates to the existing ATSC 1.0 broadcast infrastructure.)

For some pubcasters already struggling to figure out how to pay for repacking, the prospect of a second major technical change within just a few years is daunting. Oregon Public Broadcasting just finished switching from analog to ATSC 1.0 digital, converting more than 40 low-power translators in rural areas to digital with the help of state funding.

“Right now, there isn’t any plan to transition translators under repacking,” says CEO Steve Bass. “We had problems doing it the first time, and I can’t imagine doing it again.”

Even if the translators survive repacking, Bass isn’t optimistic about following that up with yet another full conversion of OPB’s network, including five full-power TV signals, to ATSC 3.0.

“The bigger challenge is that it also requires the consumer to swap out their equipment, and I can’t imagine a process by which we’d inform them that the digital TV set they have now won’t work anymore,” Bass says. “So many of these things are really driven by some equipment manufacturing sector’s desire to sell new equipment, more than anything else.”

“I think it’s very optimistic thinking that we’ll have mobile TV and consumers will want it enough to push wireless companies to add it. That’s a heavy lift,” he says.

An added wrinkle to the auction and repacking process is the prospect of channel sharing. To give more stations an incentive to take part in the auction, the FCC will allow two stations that share a market to combine digital program streams on a single 6 MHz chunk of spectrum and share proceeds from auctioning off one station’s former 6 MHz of spectrum.

Under ATSC 1.0, that requires a compromise: Stations that now program multiple HD services, or even one HD service and two or three SD services, won’t be able to accommodate all that video in the smaller chunk of bandwidth they’d have in a channel-sharing deal. Because the ATSC 3.0 standard will allow more video to be compressed into less bandwidth, a station that chooses to channel-share might eventually be able to do as much with half a channel as it does now with a full 6 MHz.

In theory, that should make channel sharing much more attractive to many stations. But even pubcasters moving ahead most quickly with channel sharing now say they aren’t counting on the future of ATSC 3.0 when they make more immediate plans for the upcoming auction.

Popkin’s KLCS recently tested channel sharing for the FCC, and he liked the results enough to enter into a deal with crosstown pubcaster KCET to share their channel once the repack takes place.

“ATSC 3.0 didn’t really factor into what we were deciding,” Popkin says. “It was more, can we make this work with us now?”

At KCET, v.p. of engineering Gordon Bell says the move to channel sharing will mean sacrificing one of the three SD services he now offers alongside his flagship HD channel.

“Going to 3.0 would allow us to expand back to where we are today, so it would provide better service to our viewers,” he says. But while Bell is a believer in the promise of ATSC 3.0, “I don’t know that I would let it influence any decisions I had to make today,” he says.

As one of the few pubcasters with two licenses — and thus two 6 MHz chunks of spectrum — in the same market, Decker says WGBH hasn’t decided what it will do with its second license, WGBX. Without certainty about how ATSC 3.0 might allow WGBH to combine its current services onto a single transmitter, Decker and WGBH’s leadership team have been turning to outside experts for advice about how to handle an issue that’s more than just an engineering choice.

At WGBH, that means convening a spectrum auction committee that draws heavily on the legal and business expertise of the station’s board members to develop a recommendation. Decker says that even smaller stations like his former employers in South Dakota and Nebraska often have board members with FCC or technology connections who can provide insight as managers wrestle with the upcoming transitions.

However the double whammy of the auction/repack and the ATSC 3.0 conversion ends up playing out, pubTV managers say one thing seems certain: The federal funding that helped pay for the conversion from analog to digital a decade ago won’t materialize again this time. While a recent demonstration of a candidate standard for ATSC 3.0 at a commercial station in Wisconsin required only a new encoder to feed the existing transmitter and antenna, experts say the real-world conversion is likely to require many more new pieces in the transmission chain.

“It would be prudent to at least put some sort of capital plan together in the 3- to 5-year time frame, to take advantage of what 3.0 may be able to offer us. If you don’t, it’s going to be tough sledding at that point,” Popkin says. Without federal funding, “stations have to kind of plan for themselves how they’re going to fund something like that.”