John McKinley, an early employee of PBS who went on to produce a TV version of Mountain Stage, died of congestive heart failure Nov. 3 in Washington, D.C. He was 66. 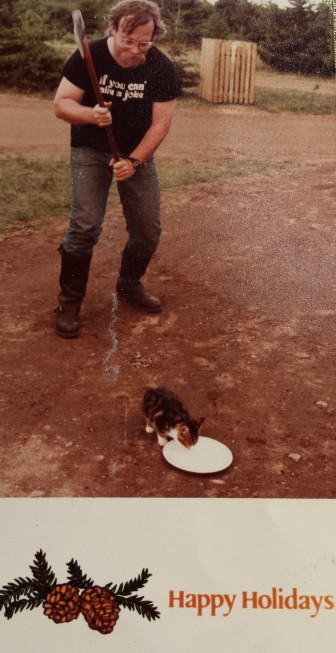 McKinley was known for his odd holiday cards.

PBS hired McKinley in 1973, just three years after its launch. Public TV development consultant Michael Soper, who worked with him there, recalls an iconoclast with a biting sense of humor. “When I first met John upon arriving at PBS in 1978, I thought he was nuts,” Soper said. “Quickly, I realized there was a very smart, cynical guy hiding under all that hair. I always remember him wearing motorcycle boots and a cape to work. Maybe that was Halloween, who knows. It could have been any day.”

McKinley held many titles at PBS, rising from an information clerk and typist to associate director, fundraising, in the programming department. He left PBS in January 2000.

Roger Downey, a longtime friend and former director of broadcasting for American Playhouse, described McKinley as a “behind-the-scenes guy who made a lot of programming happen at PBS.” Downey said McKinley “also considered it a badge of honor to be the only person in the world who hated [filmmaker] Ken Burns.”

After leaving PBS, McKinley produced a television version of the radio show Mountain Stage at West Virginia Public Broadcasting. In 2005, he joined Strategic Media Group, a video production company in Alexandria, Va., where he worked until health issues led to his retirement in 2010.

He was born Aug. 1, 1948, in Grove City, Pa., son of Harry and Lois Ann (Schroeder) McKinley. Shortly after his birth, the family moved to Owatonna, Minn. McKinley graduated from Owatonna High School in 1966 and attended George Washington University in Washington, D.C., from 1967-71, earning a bachelor’s degree in Chinese language and history. Downey said McKinley mastered at least 5,000 Chinese words.

According to Downey, McKinley lived his last years in Southeast Washington, D.C., “continuing his lifelong passion of collecting games of strategy and voraciously reading, especially the histories of war.”

“His friends have acknowledged him as having one of the most remarkable intellects and unforgettable personalities they ever encountered,” Downey noted. “He was a remarkably sharp wit possessed of a mordant sense of humor with which he often regaled and sometimes horrified and astonished his friends and colleagues.”

“There was a very smart, cynical guy hiding under all that hair,” said one friend. (Photo: Roger Downey)

Downey said McKinley will be cremated, as it was his wish “to experience the fires of hell before I get there.” No memorial services are planned, Downey added.

“However, it is expected that private celebrations and wakes will be held in his honor at various times and locations around the country,” he said. “These will be personal and intimate, as John would have preferred, and will involve firearms and firewater.”

One thought on “John McKinley dies at 66; former PBS staffer recalled by friends as iconoclast”