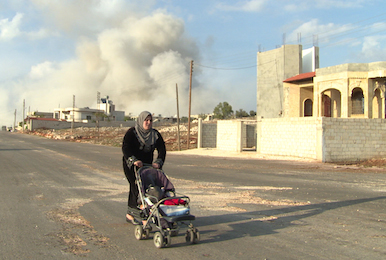 PBS won 11 honors Tuesday at the 35th annual News and Documentary Emmy awards, the most of any network.

A Syrian woman pushes her stroller away from the site of a deadly air strike in the Sunni village of Al Barra. Frontline’s “Syria Behind the Lines” won a News and Documentary Emmy for best long-form coverage of a current news story. (Photo: Frontline)

Frontline led among public TV programs, with four awards. The newsmagazine won best long-form coverage of a current news story for its report “Syria Behind the Lines,” produced by Olly Lambert, and best long-form business and economic reporting for “The Retirement Gamble,” produced by Marcela Gavira. David Fanning executive-produced both segments.

Frontline also won for outstanding research for its story “Outlawed in Pakistan,” about a girl in Pakistan who put her life at risk by taking her rapist to court, and for outstanding promotional announcement for an ad for its report on concussions in the NFL, “League of Denial.”

Need to Know, the newsmagazine produced by New York’s WNET, won an Emmy for outstanding coverage of a news story in a newsmagazine for its coverage of the deadly journey faced by Latin American immigrants to the U.S.

NPR also took home an Emmy in new approaches to documentaries, a new category this year, for its documentary “Planet Money Makes a T-Shirt.”

Viewers of the awards were avidly tweeting last night:

Thank you to all at @frontlinepbs and @bethchoppe and @PBSPressRoom – congrats to all the pbs winners!!

So proud- @Invisible_War won #Emmy for Outstanding Investigative Journalism ! Congrats to all the brave subjects who created needed change!