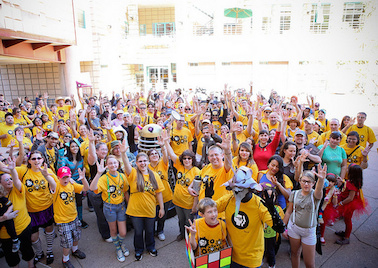 Everyone is a nerd for something — whether it’s history, television shows or making soufflés.

That’s the mantra behind the annual Nerd Walk event staged by Eight, Arizona PBS in Phoenix. Since the first walk in 2011, “nerd” events and activities that celebrate PBS stations and their viewers have spread to other cities in Michigan and Florida.

In Arizona, the station has made its Nerd Walk part of Arizona State University’s homecoming parade in Tempe, inviting viewers and the wider community to wave their nerd flags high and celebrate intellectualism and PBS. Past participants include stilt walkers, IT departments and sci-fi TV show characters. This year’s Nerd Walk, to be held Nov. 1, will likewise feature a diverse range of nerds.

“It’s interesting because it’s ASU homecoming — it’s the celebration of athleticism,” Bob Beard, the self-proclaimed nerd, and promotions coordinator, at Eight, Arizona PBS said. “And then you have last year almost 400 people marching down the street reciting pi and celebrating intellectualism, which is exactly what PBS is: celebrating intellectualism and enthusiasm for whatever that passion is that you want to deep dive on.”

Instead of using on-air spots, the station expanded its presence on social media to promote the event. Fewer than 100 participants turned out in its first year, but nearly 400 people marched last year, wearing the bright yellow PBS shirts designed for the event.

Nowadays, being a nerd is a positive thing and indicates a passionate personal interest, said Beard. In Phoenix, one Nerd Walk participant said he enjoyed learning about 16th-century Ottoman trade routes, and he credited his interest to a PBS program.

Tim Eernisse, WGVU’s development and marketing manager, worked with Beard to plan the event, learning how Nerd Walk worked in Phoenix and how it could be imported to Grand Rapids. The key, he found, was to tailor the walk to tie into an existing community event. Lacking a homecoming parade, Eernisse decided the Nerd Walk would fit best with the opening day for the Grand Rapids outdoor art competition, building on PBS’s commitment to arts programming.

“It’s taking the content that we have and bringing it into the community, one-to-one with people, and have them be a part of something that we do,” Eernisse said. The Nerd Walk has brought greater visibility to the station and attracted a demographic younger than the typical PBS viewer.

“It takes a more fun, effervescent, new, ‘oh-what’s-this’ type of look at PBS,” he said. The “nerd” brand can help shift the perception that PBS is not just “your grandparents’ station” but for everyone, Eernisse added.

In Tampa, Fla., a Comic Con proved to be the best fit for a nerd event staged by WEDU. The station set up a booth where participants could take pictures with Elmo and a PBS logo backdrop, and they could learn more about the station.

WEDU also hosted a “retro night” at its studio where PBS nerds watched old PBS shows, answered trivia questions and toured the station. These events helped test the waters for a potential Nerd Walk in Tampa.

“It’s raising awareness of what local PBS stations have to offer their community,” said Allison Alvarez Hedrick, WEDU v.p. of communications. “PBS is so much more than what people see on television.”

Back in Phoenix, Beard estimated about 500 people will show up at this year’s Nerd Walk. Participants will include a group of unicyclists excited to show off their skills.

“It’s great to celebrate your intellectualism and be really excited about things,” Beard said. “The PBS ‘nerd’ brand is the personification of what our programming aspires to be: It’s super-smart and fun and intellectual and something everyone can be a part of.”