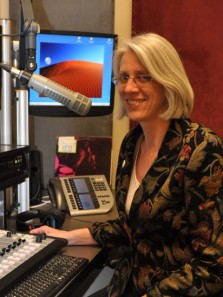 The Staunton, Va.–based organization, founded by violinist Daniel Heifetz, trains young classical musicians. Within minutes of meeting Heifetz, Roe said in the announcement, “I recognized a kindred spirit in our shared quest to shape the future of classical music, and how it is experienced and understood by musicians and audiences alike.”

At WGBH, Roe was managing producer for music and performance. He joined the Boston station in 2011 as managing director of its Classical New England channel.

Previously, he spent 20 years at NPR headquarters in Washington, D.C., in various positions including as director of music and music initiatives. During his career he won a Grammy, a Peabody and a Chairman’s Medal from the National Endowment for the Arts. Roe was also part of an NPR team awarded a National Medal of the Arts by the White House. He continues as an artistic advisor to NPR’s From The Top.

The institute also hired Roe’s wife, Jennifer Bangley Roe, as g.m. She left her job as manager of planning and communications for the president at Boston’s Berklee College of Music. She formerly served as associate director for special projects at WGBH, and before that as the longtime midday host for WDAV Classical Public Radio in Davidson, N.C.. She is a native of Staunton.

Keith Neisler, former p.d. at stations including KUT in Austin, Texas, and WEKU in Richmond, Ky., has accepted a position in executive recruitment at a firm in San Antonio, he revealed in a blog post. “I decided the time is right to try something new,” Neisler wrote. “It is an exciting opportunity and I am looking forward to it.”

Montana Public Radio hired NPR reporter Eric Whitney as news director. He replaces Sally Mauk, who retired in May. Whitney most recently covered health issues for NPR and the nonprofit Kaiser Health News. Previously he was news director at KRCC-FM in Colorado Springs and also spent a year reporting from Cape Town, South Africa, for Marketplace.

New Zealand–based NHNZ, a national history content producer and distributor, has hired Sue Houghton as a producer in its Washington, D.C., office. Houghton specializes in expedition and marine programming and has worked for National Geographic and PBS for the past eight years. Her public TV credits include “Encountering Sea Monsters” and “Saving Otter 501” for Nova.

Alison Lotto has joined Vision Maker Media, a Native media production nonprofit, as archives specialist. She’ll work in the organization’s office at the University of Nebraska-Lincoln alongside Nebraska Educational Telecommunications (NET). Lotto holds a master’s degree in library and information science from the Palmer School at Long Island University. A National Endowment for the Arts grant is funding ongoing efforts to catalog and preserve Vision Maker Media’s 38-year-old collection of media and print assets.

Peg Arnold, g.m. of WXPR-FM in Rhinelander, Wis., begins work Sept. 22 as g.m. of Utah Public Radio in Logan. She also will serve as a faculty member in the Department of Journalism and Communication at licensee Utah State University. Arnold joined WXPR in January 2012. Previously, she spent 14 years at Wyoming Public Media, including as development director, where she secured funding to advance a single-signal operation into a statewide network.

Mark H. Simpson will join ideastream in Cleveland as managing editor, news, in October. Simpson is former news director at WMFE in Orlando, Fla., and assistant news director for Florida Public Radio in Tallahassee. Most recently, he worked in Angola as social media manager for PSI/Angola, a global health organization that focuses on malaria prevention, HIV prevention and safe water.

Whitney Waara, who spent the last 10 years at CPB, is the new executive director of the nonprofit Land Information Access Association in Traverse City, Mich., which works with communities in the state to improve civic engagement, focusing on strengthening cultural and natural resources. Waara served as operations v.p. at CPB.

WKSU-FM in Kent, Ohio, has selected public media journalist Andrew Meyer as its news director. He will manage seven full-time reporter/producers in the station’s main broadcast facility in Kent and satellite studios in Cleveland, the Cultural Center in Canton and downtown Akron. Meyer arrives at WKSU from public radio WBGO-FM in Newark, N.J., where he was assistant news director and anchored afternoon newscasts, reported news stories and hosted a monthly call-in program. His past experience includes freelancing for WNYC-FM and NPR.

Carlo Robustelli is development director at WGLT-FM in Normal, Ill., replacing Aaron Wissmiller, who left in April after nearly six years. Robustelli comes from Illinois Wesleyan University in neighboring Bloomington, Ill., where he directed grants and foundation relations for the last two years. In his new position, he will oversee a staff of three responsible for raising $750,000 annually.