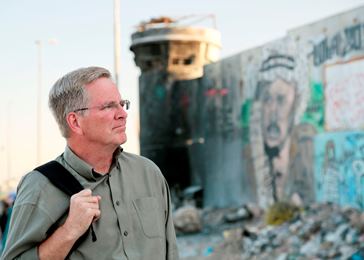 Even the centuries-old and often violent disputes between Israelis and Palestinians can’t keep travel host Rick Steves from his mission: to help people around the world better understand one another.

Producing his latest travelogue, The Holy Land: Israelis and Palestinians Today, posed challenges as complex as the ancient region’s politics. Nearly every word in the script had to be weighed and vetted by 11 experts. Just using “Palestine” was troublesome; some Jews insist on using the region’s ancient name, Judea and Samaria.

And then there’s the area’s unpredictable nature. Last fall, when Steves filmed there, the area was calm. He was able to travel to Jerusalem, Tel Aviv, Hebron, Bethlehem and Ramallah, and interact with residents of each along the way.

But by this July, the Gaza Strip, along the eastern bank of the Mediterranean, had exploded into violence. Long-simmering tensions between the Israel Defense Force and Hamas, which governs Gaza, flared once again.

Public television programmers are weighing all that as they decide whether and how to schedule the hourlong program, available Sept. 1 from American Public Television. About half of the show comes from two additional 30-minute programs, The Best of Israel and Palestine, available to stations for 12 weeks beginning in October.

Just four minutes into The Holy Land, Steves gazes into the camera as he stands in a marketplace in the West Bank and confesses, “I know this is complicated and it’s contentious, and I imagine some people on both sides are already upset with me.”

“But I’m a travel writer,” he says, “and the beauty for me is to come here with an open mind and learn.”

Steves is no stranger to controversial destinations. He traveled to Iran for a 2009 film and was “criticized by some for humanizing our ‘enemy,’” he recalled in a 2012 commentary in Current. Even before this special was available for viewing, the Committee for Accuracy in Middle East Reporting in America, a pro-Israeli media watchdog, lashed out in a July 10 blog post titled “Rick Steves’ Misguided Venture into the Israeli-Palestinian Conflict.”

But such attention just makes Steves more determined in his mission. He fervently believes that travel — either in person or experienced through film, particularly on public television — is the best way for citizens of opposing cultures to better understand one another.

“There’s a crying need for this show to get out there,” Steves said in an interview. “Sure, it’s expensive and time-consuming to produce. But I don’t think anybody else has a fire in their belly to better understand the world to produce something like this. It’s what I’m here for.”

“I’m just thankful public broadcasting exists,” he added, “where this can be shared, and where most viewers don’t run to their preconceptions but instead want to learn more.”

At least two stations, KERA in Dallas and KCTS in Seattle, are planning live events to give viewers a chance to do just that, in person with Steves.

Steves wanted to visit the Holy Land simply because he’d never been there. “I’ve also suspected that most well-educated, politically active Americans have never really had a chance to talk to an Israeli and to a Palestinian and sort through all the complexities of the region,” he says in an online Q&A accompanying the film.

Steves prepares to cross the security wall between Israeli and Palestinian territories, near the Ramallah checkpoint. (Photo: Rick Steves)

He first arrived in April 2013 to scout production sites and line up local guides in Israel, with its nearly 8 million residents, and the West Bank, bordered by Israel and Jordan and home to about 2.3 million Palestinians. Each side, Jewish and Muslim, claims the land as their own and has for thousands of years.

That history complicates even the basics of daily life, such as transportation. During production in October 2013, Steves had to switch taxi drivers at the security wall separating Israel from the West Bank — a routine moment for residents that struck him as especially poignant.

“An unintended consequence of the wall is that people can’t talk to each other,” he said. His Israeli driver dropped him at a freeway roundabout near the wall to meet his Palestinian cabbie. “I’ll never forget,” Steves said. “The two drivers shook hands and said ‘shalom’[‘peace’]. Here they are, just two people, living in a very frustrating quandary, who wanted to connect.”

And experts on each side are extremely cautious — and outspoken — about how their people are portrayed in the media. “That was a fascinating challenge as a script writer and travel producer,” Steves said. Both the script and a rough cut of the program were reviewed by six Israeli and five Palestinian authorities including academic historians, rabbis, tour guides and a former U.S. congressman. Steves noted that “due to the sensitive topic,” the experts asked that their names not be made public.

One of the Israeli experts asked Steves not to “gloss over” the violent Palestinian uprising known as the intifada in which numerous Israelis have been killed over the years, he said. “We agreed, and purchased footage of that carnage,” such as bus bombings, “to make it more graphic visually.”

Another change in wording: Some 25 percent of Israel’s population is Muslim. “I thought of them as ‘Arab Israelis,’” Steves said. “But they want to be called ‘Palestinian citizens of Israel.’ So out of respect to them, which is what I think should be the main concern, I called them that.”

Steves made other changes after consulting with David Davis, television production v.p. at presenting station Oregon Public Broadcasting, and Chris Funkhouser, v.p. of Exchange programming and multicast services at APT.

“I think Rick did a very good job of being balanced and careful about the way he said things,” Davis said. “It’s very clear there are two or more points of view, and he was there not to decide between them but allow us a window into both.”

Funkhouser noted that APT provided feedback, “and Rick incorporated much of what we suggested, retaining some of the content he felt was important to the program.”

“This is a production focused on travel — what to see and what to expect — and getting to know the people, culture and history,” Funkhouser said. “It is not a political documentary, nor is it intended to be.”

To air, or not to air

It’s too early to tell whether programmers will shy away from the potentially controversial travelogue. However, some stations are scheduling the program specifically because it does provide a glimpse of a place that remains baffling to many Americans.

Steves enjoys a moment with Israeli children in the West Bank during production. (Photo: Rick Steves)

Oklahoma Educational Television Authority (OETA) will run it Sept. 23 in primetime, said programmer Holly Emig. “Finding accurate, unbiased information about the Holy Land is difficult,” she said. “Most news sources will give only the latest information to the ongoing story, and most of us need context before we’ll understand the headlines. Rick’s special will undoubtedly help to provide some context, and it will help in a way that is likely more entertaining for some viewers than hard-news reporting.”

KERA is going even further, planning a live appearance by Steves to discuss the film Oct. 1 at the Winspear Opera House in Dallas. Steves will appear in conjunction with the local World Affairs Council and the AT&T Performing Arts Center. The station is also offering tickets to the event as a premium during August pledge. KCTS is in the early stages of planning its event, said spokesperson Hilda Cullen.

Yet other programmers remain reluctant to run The Holy Land due to the upheaval. “I will likely hold onto it until after the current conflict has settled,” said David Thiel, content director at WILL-TV in Urbana, Ill. “Why air a travel show about an area that’s under a travel warning?” The U.S. State Department issued its most recent statement about traveling to the area July 21, advising American citizens to defer nonessential visits to Israel and the West Bank and issuing a “strong warning” against travel to Gaza.

The program also won’t run for now on Wyoming PBS, said General Manager Ruby Calvert. “With the ongoing violence in Gaza,” she said, “it is not likely that we will be airing this program very soon. It just doesn’t seem appropriate to be celebrating and encouraging visitation to this part of the world when there are so many people suffering from the escalating violence.”

Steves specifically avoided Gaza, where the current conflict is centered. “I wanted nothing to do with Gaza or Hamas,” he said, referencing the Palestinian organization that is currently launching missiles into Israel. “I did not want to get embroiled in that. I make it clear with the map at the beginning of the program that we are talking about the West Bank,” about 65 miles to the northwest of Gaza. Most residents there, he found, “have decided that violence is counterproductive and no solution.”

He finds reluctance to schedule the program “a sad irony” and “illogical.”

“After working on this for well over a year, including two extended trips there, I see a huge need for Americans to have a basic understanding of the issues,” Steves said. “It’s so important to talk about it. And commercial television would never do this. This is public television’s realm.”