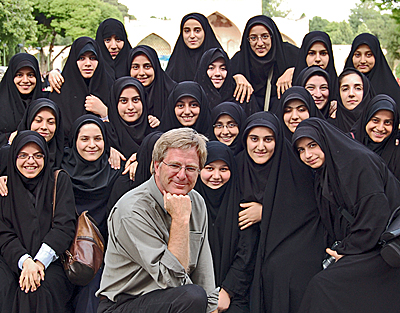 It’s public television’s responsibility “to bring home a better understanding of our world,” says travel guru Rick Steves, who saw it as his “duty” to go to Iran, above. (Photo: courtesy Steves.)

It’s public television’s responsibility “to bring home a better understanding of our world,” says travel guru Rick Steves, who saw it as his “duty” to go to Iran, above. (Photo: courtesy Steves.)

There’s a lot of fear being pushed in our society these days, and as I see it, the flip side of fear is understanding. And, like travel, public television promotes understanding. As much as I love to talk about Europe and the value of a journey that takes you outside your comfort zone, I also love to talk about the mission of public TV to challenge us with new ideas — especially if they get us out of our comfort zones.

For 15 years I’ve been traveling to big cities during March pledge season and making personal appearances during local pubTV pitch breaks, producing virtual pledge events for stations in smaller markets. This year I told my friends at WTTW in Chicago, KQED in San Francisco and WGBH in Boston that I’d planned a different kind of pledge tour. My “Road Trip USA” pledge drive took me to 20 different markets — most of them small cities — over 20 days. I travelled from Seattle to Tallahassee, Fla., via places like Boise, Idaho; Grand Junction, Colo.; Des Moines, Iowa; and Conway, Ark. I stopped for lectures and pledge gigs at a different city each night. I ate a lot of pledge food and still had a great trip.

I like to tell audiences, “Considering the challenges confronting our society and the shrill discourse elsewhere on the dial, it’s a blessing to have one channel that respects your intelligence, assumes you have an attention span and brings you programming that’s shaped not by advertisers’ needs but by a passion for bringing you a better understanding of our beautiful world. And because of that, I believe public broadcasting is not a charity. It’s a service. And supporting it is flat-out good citizenship.”

When I make this pitch during a pledge drive, the phones start ringing. When I say it during a lecture or public TV station event, it draws applause. When I talk with station managers about how this message is received, many say they appreciate how I talk about mission with an edge. As local broadcasters, it’s something they can’t do as aggressively as they might like to.

Not everyone likes to hear edgy talk about public TV’s mission. A couple of times during my tour, station membership directors told me that they’d heard complaints from viewers who were expecting a travel talk, not a speech with a hard-hitting message that linked the broader-perspective values of traveling abroad to the values of public TV.

But, as I say in my talks and on-air pitches, the experiences of visiting other countries and watching public TV both allow us to explore the world, better understand the other 96 percent of humanity and realize how inextricably our lives as Americans are linked to those who live in other cultures and on other continents. I believe that if I don’t provoke at least some people with this message, I’m not doing my work.

When I produced my show about Iran a couple of years ago, I was criticized by some for humanizing our “enemy.” I recognized that most Americans’ knowledge of Iran had been shaped by the commercial media’s circus-like coverage of the Iran hostage crisis. I saw it as my duty as a travel teacher and public TV producer to take our audience to Iran and help them understand how a nation of 70 million people could think the way they do.

No underwriter would touch this program. Some stations received letters from major donors threatening to write them out of their wills for broadcasting it. But public TV stations wouldn’t be extorted. It’s our mission to bring home a better understanding of our world. And I’m both proud and thankful to be a small part of this effort.

Regardless of the city they live in, public TV viewers are hungry for intellectual stimulation and cultural understanding. During my pledge road trip, my messages for public TV audiences in red states and blue states were the same. In more conservative communities, audience members and station managers seemed to find it cathartic to hear me express a worldview they shared but weren’t comfortable expressing themselves. Even those who didn’t agree with me seemed to appreciate the respectful dialogue we had about challenging ideas.

Standing on stage in a theater filled with leading citizens of cities like Des Moines or Boise, I shared European perspectives about empire, terrorism, military spending and legislating morality. I explained that I was sharing viewpoints of the European mainstream— not necessarily my own — and let audiences know that Europeans are thankful for the valor and heroism of American soldiers during World War II. I also acknowledged the advantages of operating my business in America, not Europe. People who otherwise might have shut the message out seemed engaged by it.

Thomas Jefferson wrote that travel makes a person wiser, if less happy. It’s not easy to hear cultural perspectives that challenge your worldview, and there are countless alternatives on the dial for people who’d rather not expose themselves to them.

But just as travel is, for me, a crowbar for prying open long-held perceptions about distant places and people, thoughtful television confronts us with new ideas, engages us with our world and has a positive impact on who we are. Clearly, that’s a service worth supporting.