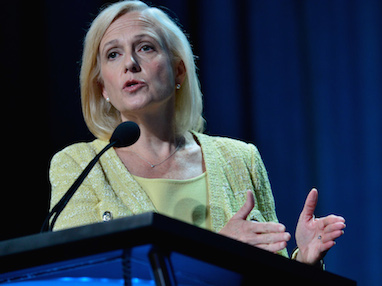 BEVERLY HILLS, Calif. — PBS’s upcoming The Roosevelts, a 14-hour blockbuster documentary from Ken Burns, is about as sure a thing as the network could broadcast. Since The Civil War, Burns’s projects have become famous for driving viewers to public television.

Speaking at the TCA summer press tour, Kerger said PBS’s on-demand offering of The Roosevelts alongside its broadcast premiere is “an experiment.” (Photo: Rahoul Ghose, PBS)

But this year, the Burns documentary is also an experiment. PBS announced Tuesday that after the first two-hour segment airs Sept. 14, viewers will be able to stream the entire series via station websites and PBS-branded sites on Roku, Apple TV and Xbox.

PBS often streams programs immediately after broadcast, but it has never streamed an entire series after the premiere. As a result, viewers will be able to watch episodes of The Roosevelts online before they can see them over the air.

PBS is taking the step “to accommodate a wide range of viewing habits,” PBS President Paula Kerger told TV writers here at the network’s portion of the Television Critics Association summer press tour. PBS had announced previously that The Roosevelts would air over seven consecutive evenings, with each two-hour episode repeated immediately after premiering.

Streaming has been a boon for Downton Abbey, PBS’s hit drama entering its fifth season in January, Kerger said. “We found that, by offering it up in multiple places, people could catch up and come in and out of the broadcast,” she said. “Rather than being impacted negatively, [the drama] is impacted positively by people who may miss an episode or two, catch up and then come back into the stream.”

Kerger said episodes of Downton Abbey are not available via the Web before broadcast because viewers might enjoy the show less if they knew the drama’s plot twists ahead of time. But that’s not a concern for The Roosevelts, she said. “You sort of know what’s going to happen with The Roosevelts,” she said. “So I felt it was something we could do.”

Offering The Roosevelts on demand is “an experiment,” Kerger said, “and, like everything else we’re doing, we’ll be looking at how people are finding it.”

Kerger has frequently emphasized the need to expand PBS content onto digital platforms. She began her TCA session by nothing that PBS.org was the top broadcast network website for the first five months of 2014, according to comScore Media Matrix.

In response to questions, Kerger hinted at a new drama series produced in the U.S. Kerger and other PBS execs have long expressed a desire for a domestic drama, and the possibility of producing one has been examined off and on for several years.

In recent years, PBS programmers have hinted that a period drama has been under consideration. This time, when asked, Kerger replied: “I’m smiling, and we’ll be able to tell you something soon.”

Asked about titling a nature show Sex in the Wild, Kerger said the idea was to arouse interest in the series. “We are competing with everyone else to get people’s attention. . . . I think we have to sometimes work a little harder to get people to sample the first couple of minutes and hook them in.”