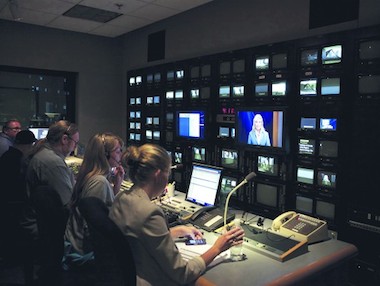 Public media employees have increasingly sought to join unions during the past two years, spurred by expanding newsrooms, shifting management priorities and a desire for more influence in strategic planning.

A membership organization that represents screen actors, producers and broadcast employees, SAG-AFTRA was formed in 2012 by the merger of the Screen Actors Guild and the American Federation of Television and Radio Artists. Most of its members are actors, though the guild also represents employees at several commercial broadcasters.

“As the media landscape changes, [pubmedia employees] are seeking a collective voice to advocate for the issues that matter most, like protecting and advancing the quality of their news and programming, and ensuring that careers in public media are sustainable for the long term,” said Philip Denniston, assistant national executive director of organizing for SAG-AFTRA.

Denniston estimates that 70 staffers at SCPR, 55 staffers at KPBS and 50 staffers at Chicago Public Media are represented by the bargaining units negotiating for contracts. Because WYPR employees haven’t yet voted on union representation, a staff member who organized the petition declined to comment on how many staffers may end up joining the union.

Management at the first stations to unionize — KPBS and SCPR — declined Current’s requests for interviews about labor relations, as did a receptionist for Jackson Lewis, the law firm retained by SCPR. Management at WYPR, where employees filed a petition to organize last month, did not respond to requests for comment.

As more pubmedia outlets move into multiplatform production, the strain on employees can heighten the appeal of organizing, as was the case at KPBS. “Things just changed to such an extent for journalists — there’s been consolidation, there’s been lots of job loss, lots of change in job titles,” said Maureen Cavanaugh, host of Midday Edition on KPBS-FM and a member of the station’s bargaining unit. “Lots of people used to make a lot more money in this profession than they do now.”

Defining job duties in union terms within each multiplatform media organization poses its own challenge for organizers, as new job descriptions are added even while negotiations are underway.

“If you talk about somebody who’s a ‘producer,’ that’s a word that can mean whatever it means at whatever station you’re at,” said Jeff Spurgeon, a host on New York Public Radio’s WQXR-FM and shop steward of the broadcaster’s SAG-AFTRA unit. At Chicago Public Media, the bargaining unit is using the blanket description of “content creators” to define employee eligibility.

When Spurgeon first entered broadcasting in 1987 at a commercial music station, he had no desire to join its bargaining unit. But after he did, union membership ended up being “one of the best things that ever happened to me professionally. . . . I had a contract that defined my working conditions and my wages, that defined in some cases bonuses and what I could do to get a bonus, that defined overtime rules.”

“I always thought that journalists should be unionized,” said KPBS’s Cavanaugh, who belonged to a union at a commercial station prior to arriving at KPBS. “I was quite surprised to find out that, generally speaking, in public broadcasting that was not the case.”

The recent wave of unionizing began at SCPR in late 2012, when employees petitioned management for SAG-AFTRA representation. The petition included signatures from 41 reporters, producers, show hosts and news anchors, according to SCPR, and followed several years of grant-funded expansion in the station’s newsroom.

The station had received millions of dollars in grants from CPB and foundations, and its newsroom staff had doubled in size to more than 100 employees. Employees sought pay increases that were commensurate with the expansion of their job duties, which had come to include  creating digital versions of radio stories and delivering more live reports. They also sought greater job security and a stronger voice in discussions about the station’s strategy, according to Adolfo Guzman-Lopez, an education reporter for SCPR who helped organize the union effort.

“Frankly, we see strong public radio stations like KQED, WNYC and even the NPR network functioning as union shops, and we would like to get some of the job security and benefits that people who work in those stations have,”Guzman-Lopez said.

But the push to unionize created friction between KPCC staff and management. In the two months between the petition and the January 2013 vote to unionize, SCPR management retained Jackson Lewis, a law firm known for its expertise in combating unions. It has offered its “How to Stay Union Free” seminar series to businesses for three decades.

SCPR leadership held mandatory staff meetings to discuss the vote. Employees who were eligible to unionize discussed the issue along with employees and executives who were not, according to a KPCC employee who backed the effort to unionize. Nonunion employees, several of whom were among the station’s best-paid staffers, voiced anti-union opinions at the meetings that clouded the debate, according to the employee.

“You had people in underwriting and development, people making six figures at the station . . . questioning why we would want to break up the family,” said the employee, who requested anonymity due to the ongoing negotiations at the station.

In the lead-up to the vote, some KPCC employees who opposed unionizing launched a website, “Reasons to say NO to SAG-AFTRA.” It featured essays by prominent staffers, including AirTalk host Larry Mantle, OffRamp host and creator John Rabe and Take Two co-host Alex Cohen. “I think unionizing would create a more consistent, but more rigid, relationship between employees and management, regardless of how we customize our contract or management procedures,” Mantle wrote, according to the SoCal media blog LA Observed, which reported on the union debate at KPCC. Site administrators put password protections on the site after LA Observed reported on it.

Mantle declined to comment to Current on his initial objections to the union, citing the ongoing contract negotiations.

Despite the internal divisions, employees eventually approved SAG-AFTRA representation in a 35–26 vote.

‘A germ in our consciousness’

South of Los Angeles along Interstate 5, San Diego’s KPBS was experiencing growing pains of its own.

KPBS, a university-licensed pubcaster with both radio and TV stations, had undergone a different transformation, requiring its reporters to produce stories in multiple formats. It began expanding its news operations in 2009 by relaunching KPBS.org with a focus on news coverage. In 2011, it converted KPBS-FM from a dual format to an all-news station, and KPBS-TV debuted Evening Edition, a locally produced news program. For the nightly TV news production, the station added four staff positions. Employees across the newsroom were expected to contribute content across all platforms.

“As our reach and our mission expanded, there just began to be this feeling that we weren’t being included in those discussions about where the station was going,” KPBS’s Cavanaugh said. “We want to be part of this, but unless we’re taken seriously as professional journalists, that conversation may never take place.”

The simultaneous push into TV and digital news strained editorial and production staff, according to Cavanaugh. “People who had been primarily, if not exclusively, providing content for radio news found themselves providing content for radio news and TV news and web news,” she said. Managers used the term “convergence,” which to Cavanaugh and other staff translated into “the existing staff does more.”

Meanwhile, the newsroom expansion at SCPR prompted some KPBS employees to take jobs with the Los Angeles station during the lead-up to the unionizing vote. When KPBS staffers learned about organizing efforts at SCPR from their former colleagues, the idea of seeking SAG-AFTRA representation resonated. “It just started to become a germ in our consciousness at that point, because there hadn’t been much talk about unionizing at all,” Cavanaugh said.

In September 2013, eight months after the SCPR vote, KPBS staff petitioned management. Station leadership discouraged the vote. An internal memo acquired by San Diego CityBeat stated that station heads “strongly believe that a union is not in the best interest of our employees or the future of KPBS.”

Like SCPR, KPBS held mandatory “education” sessions for employees, Cavanaugh said. “They waged a very, very strident campaign against our unionizing,” she said. KPBS staff couldn’t determine whether the anti-union pressure originated from management or from the SDSU Research Foundation, the organization that oversees expenditures at San Diego State University, which owns the station’s license. A spokesperson for the foundation declined to comment, citing ongoing negotiations.

Staff voted to unionize in November.

Chicago Public Media staff petitioned for union representation in October 2013, but their efforts to seek recognition from the National Labor Relations Board were delayed by the shutdown of the federal government. The staff voted 40–7 to unionize in an NLRB-sanctioned vote held in December, according to SAG-AFTRA.

Management took a more accommodating stance than at SCPR and KPBS. CPM execs didn’t aggressively campaign against the union but “did ask staff to consider voting no . . . and there were a few meetings that we were asked to attend,” said Becky Vevea, a CPM union member and producer and reporter covering education.

The bargaining unit includes editorial and production staff at WBEZ and its sister station, Vocalo, as well as locally produced shows such as Sound Opinions. It does not include production staff from WBEZ co-productions such as This American Life and Wait, Wait . . . Don’t Tell Me!, Vevea said.

CPM staffers are in the midst of contract negotiations and declined to discuss their reasons for unionizing.

Though employees at the unionizing stations have not coordinated their organizing efforts, they have been talking to each other. After CPM staffers entered negotiations, the freshly unionized team at KPBS emailed messages of support to their colleagues in the Midwest.

The most recent station to attempt unionizing, Baltimore’s WYPR, presented a petition to management in June. A staff vote on whether to organize will be held by secret ballot.

Staffers are still determining who would fall under union protection. A July 7 ruling from the NLRB found that Midday host Daniel Rodricks and Maryland Morning host Sheilah Kast are considered supervisors, not employees, and are not eligible for union representation.

Correction: The name of KPBS-TV’s nightly news program is Evening Edition, not Inside Edition, as an earlier version of this article misreported.
Questions, comments, tips? lapin@current.org
ShareTweet EmailPrint More