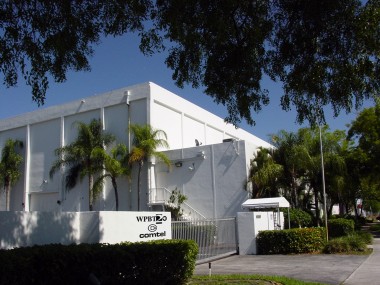 WPTB in Miami, above, and WXEL in Boynton Beach, Fla., began merger talks a few months ago. (Photo: WPBT)

WPBT in Miami and WXEL in Boynton Beach, some 60 miles away on the state’s east coast, announced June 6 their intention to work toward becoming a new entity, PBS South Florida. The two stations have informally discussed collaborations over the past decade, but this is the first announcement of a possible merger.

WPBT in Miami, above, and WXEL in Boynton Beach, Fla., began merger talks a few months ago. (Photo: WPBT)

CPB has just approved a $150,000 grant request from the stations as part of its merger/collaboration planning assistance program. The cash will support research and analysis to inform the process and help the stations develop long-term financial plans.

Representatives for both stations said there is no timeline for completion and that talks are in early stages.

“One thing that has become very clear throughout this early part of the process is just how complex it is,” said Max Duke, WPBT’s v.p. of content and community partnerships. “We still have to go through looking at FCC approval, state approval and PBS membership. We want to make sure the decisions moving forward are what’s best for the communities and the stations.”

A combination of factors led to deepening discussions over the past few months of a formal merger, Duke said. “We’ve been seeing a pattern of success in other local markets” with collaborations, he noted. Also, both stations have relatively new leadership: Dolores Sukhdeo took the helm at WPBT in September 2013, and WXEL-TV President Don Sussman came on in the summer of 2012.

“This is the right time and the right place to be creative and take bold steps to serve our community,” Sukhdeo said in the announcement. “We are in a new era of communication, and there are many advantages of working together to maximize our resources to create local content and services.”

“I look at this as a tremendously exciting opportunity,” Bill Scott, e.v.p. at WXEL, told Current. “The intention here is a single word: Service. How we can serve all these communities with arts, entertainment and PBS programs, and enhance and increase local programming reflective of what the people need and want.” A merger would also eliminate duplicate programming, he said.

Currently, WXEL has around 30 full-time staffers; WPBT, approximately 70. At this point, layoffs are not part of the discussion. “The goal here is to be additive and not to take anything away” from either station, Duke said.

The idea of merging the stations has a long history. Former WPBT President Rick Schneider, who took over as c.o.o. at WETA in Arlington, Va., last July, told Current that he had hoped to forge an agreement during his nearly 10-year tenure in Miami. “The idea of getting together — through merger, acquisition or collaboration in some form — greeted me on my first day of work at WPBT and was on my mind every day until I left,” he said.

But the timing was never quite right. Barry University, WXEL’s licensee, put the station up for sale in November 2004. The private college sponsored by Dominican nuns had held the license through a nonprofit since 1997.

The university negotiated a $5 million deal to transfer control of the radio and TV stations to New York’s WNET in 2005. That proposal languished for three years at the FCC, hitting a snag over commission rules governing local ownership. WNET withdrew the offer in 2008.

Subsequent deals pursued with the local school district and a community group, Community Broadcast Foundation of Palm Beach and the Treasure Coast, never ended in an agreement.

In 2012, WXEL Public Broadcasting Corp. — a group led by Sussman, CEO Bernie Henneberg and Vice President of Development Debra Tornaben — paid $1.4 million to Barry University to acquire the license. The deal was finalized July 20 as the station celebrated 30 years on the air.