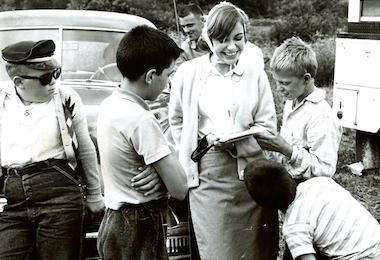 Linda Winslow began her career in public television news production in 1967, the same year President Johnson signed the Public Broadcasting Act. She signed on as an intern after studying under one of public television’s founding fathers, legendary CBS News chief Fred Friendly. Soon, she’ll retire as executive producer of PBS NewsHour, the public-affairs show that grew into a multiplatform newsroom and birthed a spinoff weekend news program — a first for PBS.

Winslow has not named a specific date for her retirement and will stay with the show until her successor is named. “We’ve already concluded that no one who follows in her steps will ever be able to fill her shoes,” said NewsHour co-anchor Gwen Ifill.

Winslow sat down in March 2014 for an interview in her office at WETA’s studios in suburban Washington, D.C. In this excerpt, the first of three parts, she discusses her early studies in journalism under Friendly, as well as whether public TV has reached its full potential in news and public affairs programming. Parts two and three will be posted in coming weeks.

This transcript has been edited.

Current: Fred Friendly was your professor at Columbia, in his first year teaching at the journalism school?

Winslow: He was fresh out of CBS News, and it was on the heels of the argument he’d had about running the Fulbright hearings on Vietnam as opposed to reruns of I Love Lucy. At the time, Columbia’s Journalism School didn’t have much of a television program. So they reached out to Fred.

His first year was 1966 — I graduated in 1967 — and he had no idea how to teach. So he simply treated us as though we were his employees, which was an introduction to television of the first magnitude, because he was a tough boss. And for a bunch of kids straight out of college, it was an eye-opening experience.

Current: In a biography of you on the Columbia Journalism School’s website, you said, “His enthusiasm for the power of television in the right hands convinced me to go into the business.” How so? What was it about him?

Friendly “was a very charismatic guy. You either loved him or you hated him,” Winslow said. (Photo: Andrea Mohin, Current)

Winslow: Well, he was a very charismatic guy. You either loved him or you hated him. There was no being lukewarm about Fred. And I loved the energy that he came with, and also it was a time when television was still doing tremendous things. I didn’t grow up with a television set, so I had no idea who Walter Cronkite was, nor did I know who Fred Friendly was.

Fred was so enthusiastic about the stuff he had done with Ed Murrow, and he brought the CBS Reports documentaries to class all the time — that’s what we were looking at. So I’m thinking that if I go into television, I’m going to be working on Harvest of Shame Part II or something. It took me awhile to figure out, not so much.

We watched the impact that the coverage of the Army-McCarthy hearings had on the viewing public. I realized television is really powerful. And Fred was an apostle of the same thing that Ed Murrow represented. They used to call television the “800-pound pencil.” And I thought this is really much more interesting to me than just writing a story. I wanted to get out there with a camera.

At the time, of course, there were all kinds of limitations to what ‘getting out there with a camera’ meant. The camera weighed about 800 pounds, and it had to have a separate tape recorder or some device besides that. So there were two guys on the crew accounted for, and then there was the guy with the lights. It was cumbersome, but also a challenge as the producer, because it made you instantly into a kind of field marshal. You were trying to organize all of these other people to get something that you wanted in the can.

Current: Friendly was also among the first to conceptualize public television. Did you get into that in class, or was that later?

Winslow: He talked about it a great deal. He was writing his book Due to Circumstances Beyond Our Control, which is kind of an indictment of commercial television.

The year I graduated, 1967, was the year that Lyndon Johnson signed the Public Broadcasting Act. The Ford Foundation set aside $10 million, which was a lot of money in those days, to create the very first interconnected public television program called PBL, the Public Broadcasting Laboratory. They funded it for two years, and the idea was to go up once a week on Sunday nights nationwide with a magazine-format kind of program.

An early reporting assignment for Winslow: covering the Fireman’s Muster for the Berkshire Eagle in Pittsfield, Mass., in 1963. (Photo: Joel Librizzi)

I interned there. The day before graduation, Fred had asked me to apply for the internship because he said he wanted a woman in the group. He was picking four people from my class to be the first interns, and he wanted one of them to be a woman. He didn’t have a lot of choices in my class.

Current: Were there many women in the class?

Winslow: No [chuckles]. But I was headed for a job at Businessweek, and, had it not been for Fred, I probably would have been in print all my life.

Current: For its opening segment, Public Broadcasting Laboratory focused on the issue of race, specifically “the failure of communication between the races.” One of the segments featured “Negro actors in white face as a double-edged device reversing minstrel show stereotypes.” That sounds very cutting-edge.

Winslow: In its day, it was very cutting-edge. The director of the whole thing was Av Westin, and he had assembled some very creative people from various networks. It was a refuge for people who were running away from or trying to escape from commercial television. And it was open-ended. We had to go create a network every Sunday night. There was no PBS; there were television stations in college towns and community towns. We would use AT&T landlines and connect them all on Sunday nights, which was an enormous job.

And once we got them all connected, we figured why just one hour Sunday night? How about we go until we’re done? So sometimes the show was two hours, sometimes it was two hours and 45 minutes.

One night we televised live from the Village a new play by Jerzy Kosinski. The guy who sold the boss on the idea of doing this live production neglected to tell him the whole thing was in Polish. [Laughter] So we were definitely cutting-edge.

We also ran some really fine documentaries. There was a Canadian woman named Beryl Fox, a really fine documentary filmmaker, and she did some really good stuff with Bernard Fall during the Vietnam War. It was a place to meet all kinds of interesting people, and that’s where I first met Robert MacNeil. He was with the BBC and did something for PBL about the American involvement in the Vietnam War.

Current: Do you think that the system has lived up to that promise, of offering cutting-edge content, programs that can’t be seen elsewhere?

Winslow: PBL wasn’t trying to do edgy just for the sake of being edgy. The whole concept behind public broadcasting, at least as Fred espoused it, was to look at subjects that weren’t being selected and people who weren’t being interviewed for commercial value. We weren’t trying to sell some story idea to the cigarette manufacturers. We didn’t care whether the stories were commercially viable. They were going to be meaty and substantive and important.

And for the people putting together PBL, they also wanted to combine it with arts, culture and other things — social issues and things like that. I don’t want to suggest or leave you with the impression that that’s all they did. We did some really fine documentaries with Martin Luther King, including something during the garbage workers’ march. We did a lot of very, very good documentary work. So the edgy stuff was there. It was kind of like the icing between the layers of the cake.

But to your question about whether PBS or public television, I should say, has fulfilled its promise — in some respects I think it has done much more than you could have expected back in the ’60s, more than I could have predicted. It has become an institution that people say, “Thank God for public television. I don’t know what I’d do without public television. I can’t live without it.” The numbers of those people are dwindling, but they are very loyal. The thought that you could fill the airwaves of a public station with the kind of quality programming that is now available is amazing to me.

As a journalist, I feel a little bit disappointed. I don’t think the full promise that Fred Friendly had in mind for news and public affairs has ever been achieved. And the reason for that is money. There just has never been enough money in the system to really support news and public affairs the way you would if you really wanted to make a commitment to it. We don’t have the money to make a commitment, to make it really stand out.

I think Frontline is an amazing program. It is the closest thing to CBS Reports that exists anywhere today. It’s a really, really fine program. But it doesn’t have a 52-week schedule without repeats and things in it. And the NewsHour could be so much more ambitious with the resources that other commercial news organizations can bring to their shows.

That’s my one wish — that there had been more growth for news and public affairs. I think children’s programming is knockout and arts programming, terrific. Those are the things that keep people loyal.