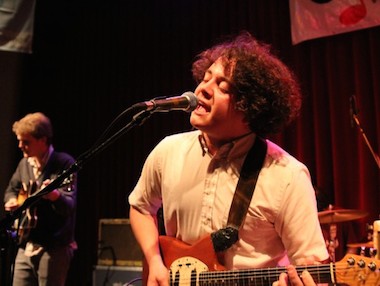 PHILADELPHIA — A survey of public radio’s Triple A stations found programmers eager to attract younger listeners and to help each other advance the format.

A presentation of survey results Thursday kicked off this year’s Non-commvention at Philadelphia’s WXPN, aimed at stations focusing on contemporary music such as rock, folk and Americana. About 210 station reps and music promoters have come together to talk shop and take in performances from emerging and established bands.

Pennslyvania band The Districts performs for Triple A programmers at the Non-commvention in Philadelphia. (Photo: John Vettese for WXPN.)

The system’s cohort of Triple A stations has been growing in recent years. It more than doubled from 2009-12, and total audience grew in proportion, said Mike Henry, c.e.o. of Paragon Media Strategies. Triple A outlets also draw the highest average donation among all stations, according to Greater Public.

Paragon’s study found a “fairly universal” drive to attract younger audiences, Henry said. As a result, “you’re seeing more and more of a focus on new music as we do that,” he said.

But some programmers warned that stations should not let demographics dictate their music choices. “It’s more about the psychographic,” said Jon Hart, station manager of KTBG-FM in Kansas City, Mo. “It’s about people who are open to new music.”

The station has made local music a priority as well. It devotes 15 percent of its playlist to local bands, and KTBG billboards feature local performers. “I just can’t tell you how much love it’s generated for us,” Hart said.

The survey also found that 80 percent of respondents want a national brand for their format. But many also said they don’t want Triple A to become homogenized. Sixty percent expressed interest in an online space for critiquing and evaluating new music.

The study was sponsored by the Public Radio Program Directors Association. Henry also shared a Kickstarter video produced by KDHX in St. Louis, which raised funds for a performance space at the station. The jaunty video and its case for live DJs over streaming services such as Pandora drew laughs and applause from the Non-commvention crowd.

Henry noted that New York’s WFUV has been “on a huge roll” since it adjusted its format last October. The station broadened its mix of music and added more songs by local and up-and-coming artists. Since then, its cume has grown by 25 percent and its average–quarter-hour audience has doubled, Henry said.

After lunch, attendees sampled beer branded with the name of Minnesota Public Radio’s 89.3 The Current. “It is a way to deepen your engagement with your hardcore listeners,” said Jim McGuinn, p.d. of The Current. The station has also created a six-song downloadable EP of local bands to go with the beer.

“Don’t get excited,” said Dan Reed, WXPN’s music director, as staffers handed out small sample cups. “They brought eight cans of beer. What the hell is up with that?” Crisp and easy-drinking, the Kölsch-style beer packed a yeasty bite and a dry finish.