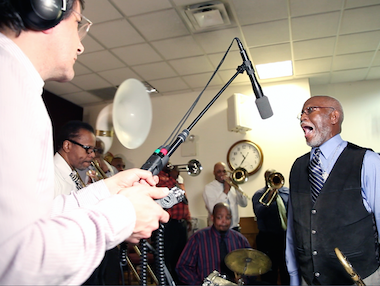 Most people don’t take time to discuss what makes us human — love, death or even why we share. But one public radio show wants listeners to stop and think.

The Really Big Questions, produced by SoundVision Productions and distributed by Public Radio International, comprises five hourlong specials dealing with questions about the human experience. The first episode, “What Is This Thing Called Love?”, premiered in February, and the show has since gone on to discuss “Why Do We Share?” and “Why Does Music Move Us?”

Olsher, left, records at Harlem’s United House of Prayer for All People for a TRBQ program about music.

The topic for May is a bit darker: “What Is a Good Death?”

The series is funded by a National Science Foundation grant and produced in partnership with the Exploratorium, a San Francisco science museum. Exhibits at the Exploratorium will spin off of topics addressed in the series; for example, an exhibit about love will ask visitors to write six-word love poems.

Bari Scott, SoundVision’s executive director, initially conceived TRBQ as a follow-up to her production company’s earlier series The DNA Files. That award-winning show, which aired from 1998 to 2007, examined the science and ethics of genetic research.

Scott began developing TRBQ with the title Science and the Search for Meaning. But the growing debate between scientists and religious believers convinced her to change the name to The Really Big Questions.

“At that time the culture wars were going on, and because of that we just did not get the funding [we needed],” Scott said. “Scientists said they would have nothing to do with religion. People were putting their fingers up like a cross and saying that religion was like ‘vampires’ and the religious people were saying we were ‘wolves in sheep’s clothing.’ It was just ridiculous.”

SoundVision did secure enough financial support from NSF to produce four episodes in 2009, hosted by NPR’s Lynn Neary. “By the time we were able to get the money, I was so demoralized  . . .  that when I was asked what my objective was, I said it was to get these shows done and out of my life,” Scott said. “I said, ‘I don’t care, I just want to get them done. I’m so sorry I even thought of this idea.’”

But those shows earned a positive response from listeners, which encouraged Scott to approach Thomas Rockwell, director of exhibitions at the Exploratorium. Scott had tried to involve the museum, which collaborated with SoundVision on The DNA Files, with the first episodes of TRBQ, but the partnership failed due to a lack of funding.

“We were amazed at the level of response from the audience that we got, and it literally boosted our spirits — at least it did mine.” Scott said. “And that’s when I called Tom again and said, ‘Let’s go for it.’ He thought that this could be an opportunity to match ideas and teams and also be a way that the Exploratorium could branch out.”

The show also builds on another growing relationship between SoundVision and Dean Olsher, TRBQ’s host and correspondent. Olsher returned to public radio last year to report for Burn: An Energy Journal, a SoundVision series about energy issues. He’d last worked in radio as host and creator of WNYC’s The Next Big Thing, which ended in 2006.

After that show went off the air, Olsher shifted his career to the classroom. For three years he taught a New York University course titled “The Medium Formerly Known as Radio,” which explored ways of using the Internet for radio journalism.

Olsher also wrote a book about the psychology of crossword puzzles, which was “a thinking-out-loud book in which I decide puzzles are addictive and not for me,” he said. He pursued (and recently completed) a master’s degree in jazz composition from the Aaron Copland School of Music at Queens College. Next on his list is another master’s degree in music therapy.

“I was definitely waiting for the right opportunity to come along,” he said of his time away from public radio. “And I was unwilling to do anything just because it was going to pay the bills. I had done this for such a long time that I knew how soul-crushing it can be to have a job that is the wrong fit.

With TRBQ, “every day is different, and that’s another thing that makes me want to do this because I get bored so easily,” Olsher said.

TRBQ matches Olsher’s experience as a radio reporter to his wide range of interests. He composes all the production music for the show and sees his hosting as a way to take an expansive view of humanities and the arts.

“The Next Big Thing was really a variety show,” Olsher said. “And because we had an hour of real estate every week, there was a certain amount of freedom to just try different things. It was really an exploration of the medium of radio. With TRBQ, it’s much more about taking on actual subjects that go for an entire hour.”

Mary Beth Kirchner, TRBQ’s managing producer, thought Olsher could rise to the challenge of hosting TRBQ. The two had known each other through pubradio for many years — Olsher interviewed Kirchner’s brother for an NPR story, and Kirchner worked on a few episodes of The Next Big Thing. But their collaboration on Burn, a radio series on energy that Kirchner produced, led her to consider him for TRBQ. Burn host Alex Chadwick recommended that the show tap Olsher for a story about New York and climate change.

“He had so many interesting ideas about how to approach it,” she said. “And at the same time, Bari was talking to me about developing TRBQ. It’s hard to think about the kind of person who’s just curious enough, worldly enough to tackle something this big.”

As TRBQ’s host, Olsher says he wants to draw in listeners and make complex topics approachable. He wants the audience to feel like they’re eavesdropping on an interesting conversation, he said.

“I’m trying to create experiences in every episode that we do so that the listener goes along for a ride,” Olsher said. “I’m sort of their surrogate, telling them what they need to know to make sense of the experiences. And that’s how they learn things without even realizing it. Because really what they’re doing is having an experience. I’m not just telling them something. The way I like to practice radio is not didactic at all. It’s experiential.”

The final installment of the show they have produced so far, “What Is Your Story?”, will air next month. TRBQ’s creative team plans to extend the series’ production past the initial five episodes, which Kirchner described as pilots, and may also produce a weekly podcast. A broadcast special around the holidays could examine the power of ritual, she said.