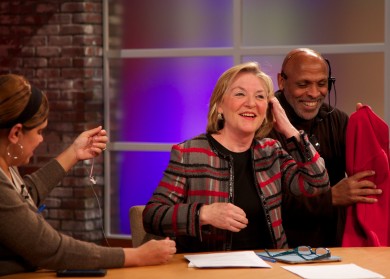 Journalist Emily Rooney is scaling back her responsibilities at WGBH in Boston. (Photo: Patricia Alvarado, WGBH)

After hosting WGBH’s Greater Boston for 18 years, Emily Rooney is scaling back her role to focus on the weekly Beat the Press program.

The move takes effect in January 2015, when Rooney also will start work as a special correspondent to WGBH News. She will also continue to contribute regularly to 89.7 WGBH’s midday Boston Public Radio program.

“When I came to WGBH in 1997,” Rooney said in a May 29 announcement, “I was an on-air rookie tasked with shaping a nightly news and public affairs show that would be accessible to everyone. I’m proud of the program we’ve fine-tuned over the years and grateful to WGBH for giving me the chance to reinvent myself. It all happened in large part due to the loyal and dedicated staff who have stayed with the show all these years.”

Under Rooney’s leadership, the WGBH-TV series Greater Boston and Beat the Press have scored numerous honors, including regional Edward R. Murrow broadcast awards and New England Emmys. She was recently inducted into the Massachusetts Broadcasters Hall of Fame.

In an online reminiscence titled “Give me a break,” Rooney wrote that “while I will miss the show and miss the opportunity to meet extraordinary people, I won’t miss the daily churn. A weekly churn will do it.”

Paula Castadio is leaving her post as president of ValleyPBS in Fresno, Calif., to join Fresno State University.

Castadio, a Fresno State alumna, has led ValleyPBS since 2003, directing a staff of 33 — plus 27 bilingual independent contractors teaching parent education — and managing a $3.8 million budget. She started in 1994 as the station’s development director and was promoted to station manager in 2000. Previously she worked in corporate development at Valley Public Radio.

Castadio currently serves on the boards of PBS and California Public Television, an advocacy consortium of the state’s 13 stations.

Louisville Public Media has named Brendan McCarthy interim news director, as Gabe Bullard prepares to depart for a Nieman Foundation for Journalism Fellowship at Harvard University. McCarthy is managing editor of Kentucky Center for Investigative Reporting, an LPM unit launched in 2013. McCarthy will manage WFPL News and the center as two entities within one newsroom. Bullard, one of 24 journalists selected for Nieman fellowships, will assist with the transition and other strategic initiatives before departing in August. He returns to LPM in June 2015.

Emily Ecton, writer and producer with Wait Wait . . . Don’t Tell Me! for 11 years, has left the show to focus on her other career: authoring books for young readers. Her first was published in 2008, and five more have followed, four under the name Emily Fairlie. Previous to Wait Wait, Ecton worked in the viewer services department at PBS.

Rickey Bevington, Georgia Public Broadcasting’s former news director of TV, radio and digital, is now senior anchor/correspondent for GPB. Among her responsibilities are local hosting duties for All Things Considered; she also continues to contribute to GPB’s newest original television news series, On the Story. Since joining GPB in 2006, she has hosted and produced numerous television and radio programs, including Georgia Traveler.

PBS SoCal has selected Elizabeth Espinosa and Rick Reiff to co-host a new weekly public affairs program launching this summer, Studio SoCal, which replaces SoCal Insider with Rick Reiff. “We want to provide a different kind of news and public affairs program for Southern California — one that is the catalyst for broad local conversations, not a stodgy discourse on the issues,” said President Mel Rogers in the May 19 announcement, adding that the new program “will engage the community with a unique format designed to invite the viewer into the discussion.” Espinosa is an Emmy-winning local TV personality recently named to the Hollywood Reporter’s list of “Hollywood’s Most Powerful Latino Talent Under 40 in the Entertainment Industry.” Reiff, a Pulitzer winner, is currently executive editor of the Orange County Business Journal. David Nazar, an investigative reporter for SoCal Insider with Rick Reiff, will report for the new show.