Author Maurice Sendak may be gone, but his final interview on public radio’s Fresh Air will live on through a unique choral composition.

“I Am in Love with the World” premieres in Baltimore in June, to be followed by another performance in San Francisco. The 16-minute piece, comprising eight short movements for choir, baritone soloist and piano, draws its lyrics from Sendak’s words in the 2011 Fresh Air segment.

“I can’t think of another example of a Fresh Air interview being used as the basis of an artwork,” host Terry Gross told Current, adding that she was “very moved” when she heard about the piece. 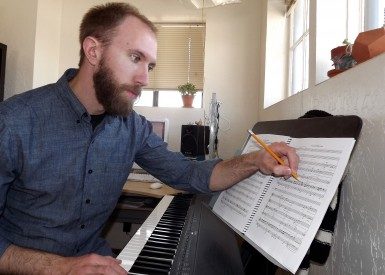 Composer Nathan Hall working on “I Am in Love with the World,” a musical piece inspired by author Maurice Sendak’s 2011 interview on Fresh Air.

Wisconsin musician Keith Hampton had the same reaction when he first heard Gross’s interview with Sendak, in the form of a podcast shortly after it aired. “I was out running in the park near my home in Madison,” he recalled. “I stopped cold and sat on a bench and listened. The part that really touched my heart was hearing him talking about how he depended on music as a healing force in his life.”

In the interview, Sendak discusses how music soothed him through the recent loss of his partner of 50 years, his own old age and declining health, and the 10th anniversary of the 9/11 terror attacks. “I couldn’t deal with 9/11 the other day,” he told Gross. “I couldn’t bear it. . . . That evening of 9/11, they conducted Mahler’s 2nd Symphony. . . . And I sat there and cried like a baby listening to the music.”

The author, best known for his acclaimed children’s book Where the Wild Things Are, died in May 2012 at age 83.

At the moment Hampton heard Sendak’s words, “I knew I’d be working with this material in some way.” Still sitting on the bench, he emailed his friend Nathan Hall, a composer and visual artist in Denver.

Hall saved that email message, “which in itself was very poetic — much more poetic in words than I will ever be,” Hall said.

Hampton wrote in part: “I am ablaze with a beautiful idea. . . . I cannot stop myself from yearning to share the spark of a new work (Song cycle? One-act? Some other form?) with you. Can we talk sometime soon? I want to write words. I must. I have found a true story that is destined to be lifted by music, yet it is the words that are coming to me. Your music, YOU were my very first instinct as possible collaboration.”

He attached the Sendak interview to the message.

“I remember feeling a little overwhelmed at the possibility of a larger-scale work filled with so much heart and emotional complexity,” Hall said. “I waited a week or so to check out the interview; I wanted to make sure I could give the collaboration enough time, as I had just started my doctoral studies at that point.

“But after I heard Sendak’s interview, I was hooked.”

“His answers left me nearly speechless”

Author Maurice Sendak in his Ridgefield, Conn., home in 2006, with his dog Herman. (Photo: James Nicoloro)

Gross had talked with Sendak several times over the years, going back to 1989. In 2011, Sendak had just published Bumble-ardy, which he had penned while his longtime partner Eugene Glynn lay dying of lung cancer. Bumble-ardy was the first book that Sendak both wrote and illustrated in 30 years.

“We wanted to do something to acknowledge the publication of his new book — we loved Maurice,” Gross said. But the author wasn’t well enough to travel to a studio. Producers decided to conduct the interview via telephone, which Gross rarely does due to the poor audio quality.

The plan was to congratulate Sendak on the book, talk for a few minutes and use the clip to end a broadcast, Gross said. “I was unprepared for how emotional the interview was,” she said. “In fact, I was so unprepared that some of his answers left me nearly speechless.”

An excerpt, which also inspired a New York Times video tribute: “I have nothing now but praise for my life. I’m not unhappy. I cry a lot because I miss people. They die and I can’t stop them. They leave me and I love them more. . . . What I dread is the isolation. . . . There are so many beautiful things in the world which I will have to leave when I die, but I’m ready, I’m ready, I’m ready.”

“In my previous interviews with Maurice,” Gross said, “after talking about his latest book, we spent a lot of time looking back into his past, talking about things that deeply affected him, like growing up in the shadow of the Holocaust and being sick as a child. I think the subject of death was central in each interview — even when it was in a humorous way. In this interview, he looked into the near future and saw death.”

Soon after he heard the interview, Hampton set about transcribing it. “I saw the words as poetry,” he said. A classically trained singer, Hampton holds a day job working in college admissions. He also consults on the side, supporting “creative people and organizations” with marketing and strategic planning, and he provides voice lessons for promising young singers.

He sent passages of the Sendak interview to Hall to be set to music. Meanwhile, he also contacted NPR for permission to use the excerpts.

The station legal team works with Fresh Air producers “to determine if the interviewee gave us the right to license the interview for the particular requested use,” she said. In this case, Sendak did, so the station didn’t need to contact his estate for permission.

Hampton’s transcription immediately inspired Hall, who composes in genres that are “all over the map,” he said. “I write whatever is inspiring at the moment: electronic music, theatrical pieces, songs, traditional string quartets. I’ve also done other pieces with poetry before, setting Latin texts or Shakespeare to music.”

“Thankfully, I’m blessed: if the right words appear, they form melodies for me very quickly,” Hall said. “I had to change a few words that didn’t sound musical. I tweaked the order of a sentence here and there. But overall the process came very naturally.”

And quickly indeed. Hall might usually spend up to four months writing a 15-minute piece. “I Am in Love with the World” only took two months.

Hampton had “planted the seed” in Hall’s mind of composing for a chorus. “The text has a grand, celebratory quality,” Hampton said. “Having a lot of people sing it will have the most impact.” He sees the baritone soloist as the narrator, with the choir “elaborating those thoughts, providing color and spirit.”

Here are segments of three movements from “I Am in Love with the World,” performed on keyboard by the composer and recorded for Current:

After finishing the piece, Hall faced the challenge of finding a chorus willing to take a risk on the work. Unless a choir commissions a piece, it’s difficult to convince a large ensemble that a premiere piece would be “worth their rehearsal and performance time,” he said. Knowing that Sendak lived openly as gay, Hampton liked the idea of having a gay choir take it on. “So I essentially emailed every gay choir in America, hoping to catch one with open time in their performance schedule.”

Adam Koch, artistic director and conductor of the New Wave Singers in Baltimore, was skeptical when he received Hall’s email. “We get lots of emails from composers about new pieces,” Koch said. “I thought this was just another one. It wasn’t until I realized what this was that I became really excited about it.”

Koch remembers his mother reading Sendak’s work to him. “There’s so much imagination in his books, and even in the Fresh Air interview there’s still so much curiosity and wonder in his words,” he said. “And now we are able to also relay the message that this was a most respectable and iconic gay man. So that’s added an interesting layer to the project.”

Several members of the choir are in touch with the Rosenbach Museum and Library in Philadelphia, which houses the Maurice Sendak Collection. The choir hopes to present a slideshow of Sendak ephemera before and after the concert.

Then, on June 14, the Lesbian/Gay Chorus of San Francisco will sing the piece’s West Coast premiere. Hall hopes to attend both performances.

Hearing details of the project “makes me wish I could tell Maurice,” Gross said. “It was an act of generosity on his part to reflect out loud about facing death. He was famous for his children’s books, but he obviously was able to move adults, like us, to tears.”