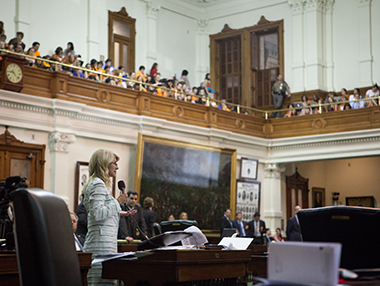 AUSTIN, Texas — Thanks to serendipity and a pair of pink sneakers, the Austin-based Texas Tribune has emerged among nonprofit news organizations as a leader in live video streaming.

The Tribune’s adoption of live streaming got a jumpstart in June 2013, when Texas state Sen. Wendy Davis drew national attention with a filibuster against strict abortion legislation. The news organization offered an exclusive stream of Davis’s 11-hour marathon and has parlayed its success into raising more than $65,000 on Kickstarter to support live video coverage of this year’s elections in Texas. The site also partnered with the South By Southwest festival in Austin to stream talks with National Security Agency whistleblower Edward Snowden and Wikileaks founder Julian Assange, both appearing remotely from overseas.

The Tribune owes its success with Davis’s filibuster primarily to “dumb luck,” said Chief Innovation Officer Rodney Gibbs Monday during a SXSW session. The organization had struck a deal with the Texas statehouse in January 2013 to stream legislative sessions, as the legislature was already doing for internal use. The legislature initially balked at the Tribune’s proposal to make the stream public but relented when the Tribune agreed to archive sessions in full without editing or altering the footage.

“They didn’t want to be ‘Colbert’ed,’” Gibbs said, referring to the possibility that the organization would pull clips of elected officials’ testimonies to mock or shame them. “We were fine by that.”

For the first six months of streaming, viewers of the Tribune’s feed averaged in the hundreds. Then Davis donned pink sneakers and launched into her filibuster June 25, running down the clock on the legislative session and preventing the Senate from voting on a measure to ban abortions after 20 weeks of pregnancy and to place new restrictions on state abortion providers. Coincidentally, just before Davis took to the floor, the Tribune had sponsored a local screening of Mr. Smith Goes to Washington. Jimmy Stewart’s lawmaker also filibusters a bill during a climactic scene in the film, though while wearing drabber footwear.

Publicity from President Obama’s Twitter feed and others who tuned into the stream drove hundreds of thousands of viewers to the Tribune’s feed, which hit its peak viewership of 183,000 just after midnight June 26.

The video cut out at midnight because the Texas legislature had stipulated that the Tribune could stream only official legislative sessions, and the end of Davis’s filibuster brought the session to a close. To capture footage of the chaotic aftermath, as Davis’s supporters rallied and Senate leaders tried to call for order, the Tribune’s on-site reporters had to shoot their own footage, which they uploaded to YouTube.

During the filibuster, the site raised more than $23,000 in donations from mostly first-time donors in more than 30 states. Then in October, it launched a Kickstarter dedicated to beefing up its live stream capabilities. The Tribune was “trying to touch that public media feel-good thing,” Gibbs said.

Now armed with its own equipment rather than relying on the statehouse’s, the Tribune has begun streaming and archiving a wide variety of political events. Its offerings include stump speeches, press conferences with government officials that are otherwise closed to the public, and its own live salon events. Viewers for these streams average in the thousands. “It feels like it’s become a second job, live streaming all the time,” Gibbs said.

Even with an abundance of media outlets covering political events, unfiltered live streams fill a niche because other news reporters use only clips from events, Gibbs said.

“You don’t get the full, C-SPAN-y, start-to-finish thing” with typical reports, he said. “CNN’s not going to show Edward Snowden’s 60-minute remarks. They’re not going to block out 60 minutes.”

The relatively low cost of live streaming and a wealth of archival space allows the Tribune to stream virtually anything it wants. But Gibbs said he’s careful not to “throw a bunch of junk out there” and dilute the site. “Just because it’s a lawmaker or a politician doesn’t mean it’s worth streaming,” he said. “I keep evoking Seinfeld: What’s ‘spongeworthy?’”

More than 220,000 unique visitors from more than 200 countries tuned into the Tribune’s SXSW stream of Snowden, with a peak of fewer than 100,000 simultaneous views. This put Snowden ahead of Davis’s filibuster in terms of overall, but not simultaneous, viewers. Assange drew fewer than 14,000 unique viewers.

As Texas’s gubernatorial race heats up, Tribune reporters will traverse the state with the candidates to live-stream events. Production costs are low: the Tribune trained reporters in shooting video rather than hiring new staff, and most of its expenses went toward equipment and a subscription to the online service Livestream. The Tribune still has around $15,000 left over from its fundraiser, Gibbs said.

3/12/14: This story has been revised to reflect updated viewership numbers for the Tribune’s SXSW streams of Snowden and Assange.
Questions, comments, tips? lapin@current.org
ShareTweet EmailPrint More