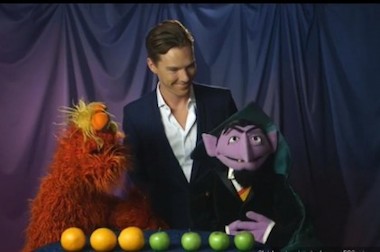 • According to local media, KEDT-TV in Corpus Christi, Texas, might be interested in acquiring KMBH-TV in Harlingen, some 135 miles to the south. Last month, the board of RGV Educational Broadcasting Inc., a nonprofit that’s part of the Catholic Diocese of Brownsville, announced that it was seeking a local management agreement (LMA) with a commercial entity and an eventual sale of KMBH. KEDT President Don Dunlap told the local Valley Morning Star Tuesday that the station has had “a number of conference calls” with KMBH, PBS and CPB about the Harlingen station’s future. Dunlap added that he is “eager to explore all options.”

Murray and The Count help Benedict Cumberbatch assess the numerical properties of fruit in a PBS video.

• A video of Sherlock star Benedict Cumberbatch counting apples and oranges with several Muppets has hit nearly 1 million views since its debut Tuesday. Supposedly, “Benedict Cumberbatch and the Sign of Four (or is it Three?)” provides a “very, very sneaky Sherlock spoiler” as to the Masterpiece Mystery! hit’s Season 3 cliffhanger.

• A new Tumblr from WFAE in Charlotte, N.C., collects recommendations for great public radio programs from people in the field. Listen Here: A Public Radio Playlist, curated by the station’s digital team, guides its readers to “stories public radio reporters, hosts, and producers think are so good, so compelling, so likely to make you laugh or cry or both at once, that even your uncle who would rather hear an hour of static than a three-minute news update won’t be able to stop listening.” The goal is to make converts of people who don’t listen to public radio.

• WGBH is partnering with 100Kin10 to recruit, train and retain 100,000 science, technology, engineering and math (STEM) teachers before 2021. The Boston pubcaster will produce and curate at least 1,000 STEM-focused digital assets for teachers in PBS LearningMedia, the national broadband service for teachers based on the Teachers’ Domain service WGBH created in Massachusetts in 2002. WGBH is one of nearly 200 partners of 100Kin10 nationwide. Last year, the station was named the STEM lead for PBS LearningMedia.

• PBS Digital Studios has released a new extended preview for Everything But The News, a series that parodies the NewsHour. EBTN will deliver semi-serious reports on Silicon Valley while also poking fun at the venerable pubTV news show. It will premiere on YouTube Feb. 12.

• Science educator Bill Nye, who began his career on public television in the 1990s, took on Ken Ham, head of the Creation Museum, in a “passionate and animated”  debate Tuesday night at the museum in Henderson, Ky. Their sparring momentarily lit up the Twitterverse.

The nearly three-hour event is archived on the museum website.

• The American Archive of Public Broadcasting, the CPB-backed multiyear project to save culturally valuable content at stations, officially opens to the public with a Feb. 10 event at the Library of Congress in Washington, D.C. Featured speaker is Sen. Edward Markey (D-Mass.), a longtime pubmedia champion. Late last year, CPB selected Boston’s WGBH and the Library of Congress to permanently oversee the collection.