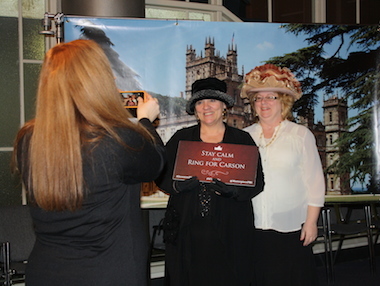 The Downton Abbey blitz is on, from festive station events to huge digital ads behind the famous New Year’s Eve countdown ball in Times Square.

While stations nationwide connect in person with thousands of passionate fans, PBS is busy making sure that everyone knows that the fourth season of the Masterpiece costume drama is quickly approaching, while also ensuring that it’s using the megahit to its maximum scheduling advantage.

Local Downton teas, parties, screenings and other gatherings are becoming annual occasions at a growing number of stations. Last year, some 112 pubTV outlets hosted the happenings; this year it’s 135, according to Masterpiece’s home station WGBH. More than 400 guests slogged through 8 inches of snow to attend the Boston station’s Dec. 14 screening.

Nationwide, PBS’s ad buys include broadcast, print, digital and outdoor, said PBS spokesperson Jennifer Byrne, who declined to discuss specific figures or whether that budget has grown over the years. Fifteen-second digital ads are flashing at shoppers on electronic screens in malls across the country. Print ads are running in US Weekly, People, Esquire and Woman’s Day, with online promos on EW.com and websites for Condé Nast publications Vanity Fair, New Yorker and GQ.

It all culminates in a promo blitz just before the Jan. 5 premiere, Byrne said. “We’re planning to heavy up on paid media on Jan. 3 to create a ‘roadblock’ for our audience leading into the premiere,” she said.

Downton Abbey “has been a bright spot in our winter schedule,” PBS President Paula Kerger modestly stated in an email to station executives Dec. 13.

Kerger said PBS is experimenting this season with pairing Downton with another Brit hit, Sherlock, which premieres on its home network of BBC One Jan. 1. The previous Sherlock season premiered in May on PBS, prompting grumbles from American fans of the detective mystery who dreaded the wait for their favorite detective show to return.

Sherlock will now premiere on PBS Jan. 19 and air immediately following Downton for several weeks. PBS will review the results of the schedule shift “to see how this works for stations and for viewers,” Kerger said.

Meanwhile, the excitement over all things Downton kicked off in New York the week of Dec. 9. Servers in period garb handed out more than 15,000 cups of tea and biscuits from a truck that stopped at various points across Manhattan. That sparked coverage in outlets including Time, People and the New York Daily News. TV coverage included an eight-minute Today segment, with hosts Al Roker and Matt Lauer mulling over where they might fit into the Downton hierarchy.

A massive digital ad in Times Square also launched that week. Downton characters appeared to speak directly to the million-plus revelers in Times Square on New Year’s Eve from a screen behind the famous countdown ball.

On Dec. 10, Downton creator Julian Fellowes, Executive Producer Gareth Neame and several cast members sat down with Bill Carter of the New York Times for a chat before more than 600 guests, shot for exclusive use by PBS member stations.

A public screening and panel discussion with cast members Dec. 12 at the Times Center generated more than 10,000 ticket requests on Facebook; 300 lucky fans were selected by a lottery. The conversation streamed live, with more than 8,000 playbacks that night, according to PBS.