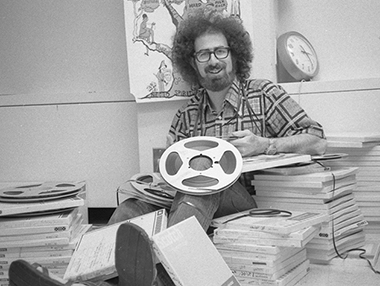 Former NPR producer Steve Rathe sits among reel tape in the early days of the network, now being revisited for the NPRchives Tumblr page. (Photo: NPR)

NPR is dipping into its vaults for a new social media project highlighting reports from its archives.

The network is digging up stories from 1984 and sharing them via Tumblr and Twitter. The project’s selections have included an author interview in which Susan Stamberg learned to use colored pencils and a report about working women who traded high heels for sneakers while commuting to their jobs.

Melody Kramer, an associate editor and digital strategist at NPR, is leading the experimental project. Kramer, a former web producer for Fresh Air who built the show’s digital audience via Tumblr and Twitter, returned to public radio last year to head up new digital projects at NPR. To manage NPRchives, she teamed up with All Things Considered producer Art Silverman, who has worked for NPR since 1978 and is helping to contextualize the material.

“We want to showcase how much is in our archives,” Kramer said. “And from a social media standpoint, I’m interested in seeing if I can make the archives go viral.”

She drew inspiration from earlier NPR projects that delved into history, such as the Twitter feed Today in 1963, curated by the Code Switch race and culture reporting team to provide as-it-happened updates about the Kennedy assassination and key moments in the civil rights movement. The feed drew more than 24,000 followers during its six-month run. A monthly podcast, NPR Playback, also shares stories from NPR’s archives.

Kramer chose 1984 in part because it was the earliest year of content archives available in the library housed at NPR; earlier material resides at the Library of Congress.

Because the year also encompassed national elections and a Summer Olympics, Kramer plans to use NPRchives to compare the network’s coverage of those events 30 years ago to how reporters will cover them in 2014. She also hopes to integrate behind-the-scenes photos and videos of NPR staffers at work in 1984, offering insight into techniques that defined radio reporting in the analog era, such as editing tape with razor blades.

Silverman is reaching out to staffers who worked at the network in 1984 to contribute items and insight to the archive. NPR’s library team is recruiting volunteers to transcribe older reports.

Kramer hopes NPRchives will become a testing ground for ways to revive archival content online. “I’m going to be using this throughout the year as an experimental sandbox-type space,” she said.

One thought on “NPRchives project revisits sounds of 1984”